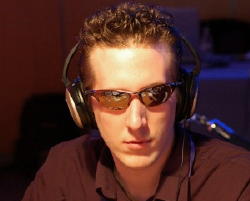 Bertrand "ElkY" Grospellier is a French poker professional and former pro gamer who has had tremendous success in the poker world. He is one of only four players to win the rare live Triple Crown of one WPT, WSOP and EPT title. He won the 2008 Festa Al Lago WPT title for $1.4 million and went on to be that year's WPT Player of the Year. He has won two EPT titles with 12 WSOP cashes and has over $8 million in live tournament earnings and another $1.7 million in online tournament earnings. At the 2011 WSOP Grospellier won the $10k 7 Card Stud Championship for over $300k. He is also known for his intense grinding and multi-tabling online. Grospellier is a member of Team PokerStars. Grospellier was born February 8, 1981 in Melun, France but currently resides in London, England.

Bertrand "ElkY" Grospellier credits his gaming background for developing his quick thinking, multi-tabling confidence. In StarCraft he had to predict the reactions of his opponents with little information, because he could see only a small part of the game, much like poker. He also became accustomed to the pressure of performing in front of large crowds at gaming tournaments in Korea. While he enjoyed the fame he had in Korea, he now appreciates the wider reach and success he has had in poker. Bertrand Grospellier's meteoric rise to the top of the poker world has been nothing short of spectacular.


Grospellier shared in an interview, "It is also a lot harder to be successful in video games than in poker. With poker you can be successful and get by after one year of training. If you want to make a living from it, you only need to look up the games with players who are worse than you. Then you win more and more. With video games you need to belong to the top three, or at least the top ten of the world in order to make a living from it. This is obviously much more difficult."

"I will play StarCraft 2 when it comes out. It will be released by the end of the year, and it could be that I will play two tournaments just for the fun of it, but not as much as I played the first one. With poker you just have a lot more freedom than you do when you're a professional gamer. Gaming takes up a lot of your time, and can also be quite monotonous to be honest."
Since the interview, Grospellier has played SC2, some qualifiers for GSL and a French invitational, as demonstrated in the last video below.

Grospellier videos of a high stakes bluff, attempting the multi-tabling record, playing StarCraft in 2002 and in 2010: