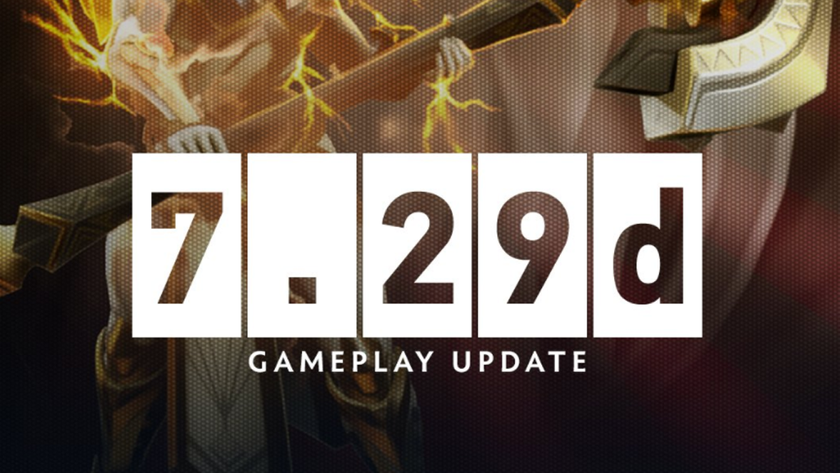 Dota 2 patch 7.29d is a balance patch, which brings nerfs to the strongest heroes of Season 2 of the DPC Leagues to bring more balance to the WePlay AniMajor.

Season 2 of the DPC Leagues is over and while no major patch was expected to drop between the end of the leagues and start of the second DPC Major (the WePlay AniMajor), IceFrog has released a minor balance patch in the form of patch 7.29d to fix a few bugs and balance the heroes who seemed excessively strong in Season 2. The changes to heroes are only nerfs to 14 heroes, with none of the heroes receiving any buffs in patch 7.29d. The entire set of changes can be found here. We will be taking a detailed look at some of the major changes of this patch.

There existed this pathfinding issue, where if a creep were directed to a specific position in the trees and its path to the lane was blocked off, it would just stay there and not go to the lane. Using Tiny’s Toss or Pudge’s Meat Hook, the range creep in a few of the initial creep waves could be prevented from going in lane and the opposition safe lane was denied a good deal of early gold and XP. Arkosh Gaming actually abused this in their second game against DogChamp in their Lower Division NA DPC League series, even though they went on to lose the game. With the change in patch 7.29d, no such shenanigans will be possible at the WePlay AniMajor. 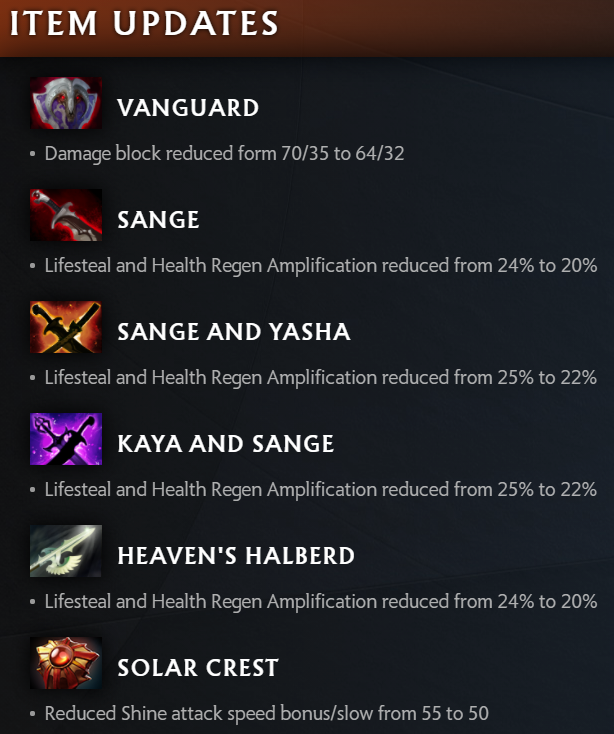 The three most busted items of the 7.29 patch are Vanguard, Sange and Solar Crest, and all of them have received minor nerfs in patch 7.29d. None of them will go out of consideration, but all of them will be held back a bit.

Sange is such a popular item because of the status resistance, that heroes either go for a causal Sange or look to fit one of the items it upgrades to (Sange and Yasha, Kaya and Sange and Heaven’s Halberd) in their item build.

Solar Crest, because of its reduced price, offers a lot more per unit gold than it did in patch 7.28, making it a must have item on the team, especially if playing a four-protect-one draft.

Axe’s popularity skyrocketed in patch 7.29 when Team Secret’s Ludwig “zai” Wahlberg made the Manta Style into Aghanim’s Shard build popular. The effect of that build depends on the illusions procing Counter Helix when attacking the enemy, which will take a hit because of the nerf to the Shard Counter Helix proc percentage. Additionally, Vanguard has also been nerfed, which is double disadvantage for nerfed Vanguard builders like Axe and Centaur Warrunner. 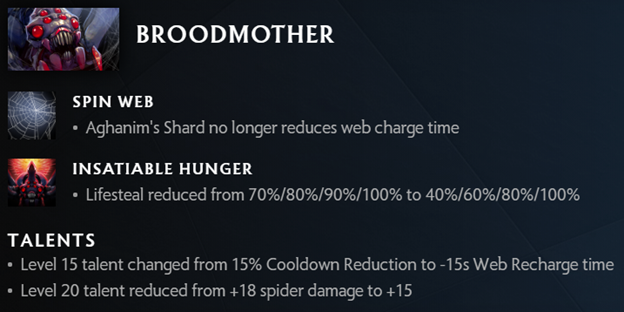 Brood’s big nerf comes to the reduction in her Insatiable Hunger lifesteal. The skill was a means of trading with the enemy carry and ending up with full HP by using Insatialble Hunger either on a hero or a creep. 70% lifesteal at level 1 was insanely high, and with the new scaling starting from 40%, sustaining in the lane will be a much more difficult task, especially for the first two levels.

With the Aghanim’s Shard and the 15% cooldown reduction talent, Spin Web would come down to a charge replenish time of 21.25 seconds from 40 seconds before patch 7.29d. With the nerfs in patch 7.29d, it only goes down to 25 seconds AND the other skills don’t get any reduction at all. This is one cheese pick which might be going past the expiry date as the WePlay AniMajor approaches.

3) Timbersaw and Tiny buy back interactions 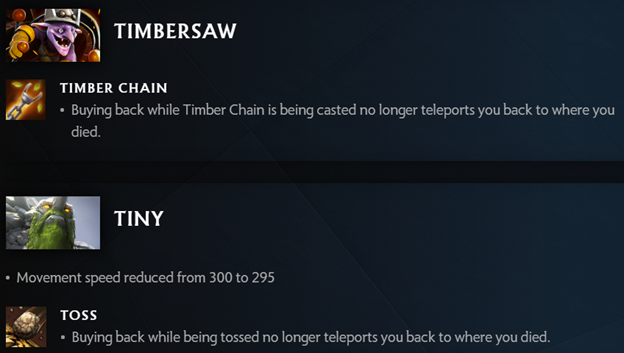 Two buy back interactions, which inexplicably sent the heroes to the position of their death after using buy back, have been fixed in patch 7.29d. For Timbersaw, the interaction benefited him as he could get back into the fight right away, just like Puck’s Illusionary Orb into Jaunt or Weaver’s Time Lapse; except those spells are meant to do that, and Timber Chain isn’t. The change is a nerf for Timber.

For Tiny, it is hard to say whether the change is a buff or a nerf, but it was definitely a bug which needed fixing. Typically, the target dying during Toss would regret finding itself back in the same position after buy back, because it inevitably meant an instant die back. But in the recent game between Evil Geniuses and Quincy Crew, it actually benefited that the Medusa died mid Toss and respawned at the same place, and that one interaction led to a whole domino effect, which surprisingly will help the North American region when it comes to number of teams going to TI10. But the change ensures there will be no unwelcome surprises for the team playing with the Tiny or against the Tiny, going ahead.

Teams going to the second DPC Major of the year might have perfected themselves according to the 7.29 meta, but they will have to recalibrate themselves based on the nerfs from patch 7.29d, especially if any of their affected heroes is one of their talismanic heroes. Dota 2 is a game where a small change can have a massive impact, and teams will have to take that into consideration as they think out their strategies for the WePlay AniMajor, which starts on the 2nd of June.

Will patch 7.29d have a significant effect on the WePlay AniMajor?