General 2/13/13, 3:04 AM Andrew “stiverton” Stiver
Returning champions Empire defend the top spot after seven weeks of play in the Raidcall Dota 2 League. Teams continue to battle it out for a spot in the top 4 and a chance at the $10,000 prize pool.

The second season of the Raidcall Dota 2 League continues in its seventh week. Let’s take a look at the standings as we pass the halfway point.

Tournament organizers Evil Geniuses come in 10th, having taken 1 of their 3 matches so far. Re-Defining Madness, formerly mTw, come in at 11th place, winless so far in 3 matches. Finally, 3D Max is still searching for a win after 6 matches played, bringing them in at 12th place. 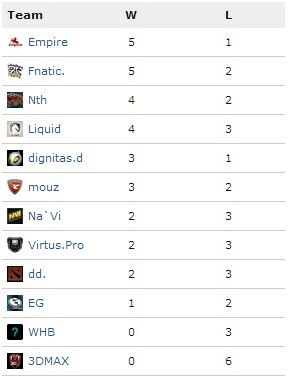 Keep up with our coverage of season 2 of Raidcall’s Dota 2 League, catch the games live, or check out the official tournament website as we close out the round robin stage in the weeks ahead.
Andrew “stiverton” Stiver
Share Tweet
17 people reacted to this post