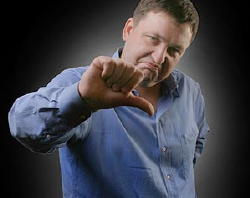 Tony G. (Guoga) is one of the most established and outrageous poker personalities and business man in the poker world. Despite his reputation as a "hyper aggressive smack talker," Guoga has numerous poker accomplishments. His first significant victory was in the 2002 World Heads-Up Omaha Championship beating Dave "Devilfish" Ulliot. Guoga then placed fifth in the 2003 World Poker Tour Grand Prix de Paris. He had a few smaller victories before finishing second in the 2004 WPT Grand Prix de Paris for $414k. Guoga won the 2005 $5k European Poker Championship for $456k. In 2006, Guoga won the Asian Poker Tour event in Singapore for another $451k. He has 15 "in the money" finishes at the WSOP that have contributed towards his over $3 million in live tournament winnings. Guoga also has multiple business interests in the poker world; including principal ownership of Pokernews, pokeraffiliateworld, and pokerworks. Guoga was born December 17, 1973 in Kaunas, Lithuania and calls Melbourne, Australia home now.

Guoga has always had a sense for when to turn up the hyperbole to bring attention to himself, and often scorn and ridicule on his opponents. Guoga insists his outburst are not planned by spur of the moment in the heat of battle moments. He is trying to get people off-balance giving him a good edge so that the other players are worrying about him. Away from the table he is much more generous, personable and easygoing.
"I love my poker, I am not as hungry to win anymore and it’s just about getting a kick out of it for me, it's my outlet to do stuff that I can’t at home."
Guoga video highlights of his outbursts, a hand against Devilfish, and a hand against Phil Ivey: