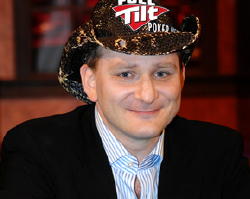 Andy Bloch is one of the most educated and respected poker pros on the circuit. He has over $4.4 million in live tournament winnings. He has been runner up in few large tournaments; second to Chip Reese in the 2006 WSOP $50k HORSE event for over a million, second in the 2008 NBC National Heads-Up Championship to Chris Ferguson for over $250k, and second to Nenad Medic in the 2008 $10k Pot-Limit Hold'em WSOP event for $488k. He defeated Phil Laak in the 2007 Pro-Am Poker Equalizer to take that title and the $500k first prize. Bloch has 26 cashes at the WSOP. He is a member of Team Full Tilt. Block was born June 1, 1969 in New Haven, Connecticut and currently resides in Las Vegas, Nevada.

Andy Bloch has one of the most academic and mathematically gifted players of his generation. He is always looking for the right edge in every gaming situation.

Bloch videos of talking about his HU match with Mike Matusow, semi-bluffing, and an interview at the WSOP: