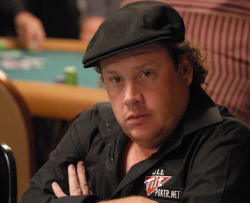 Gavin Smith is one of the most endearing tournament poker pros. He is a fun loving Canadian poker pro who is known for his fun loving spirit on the tour. He won the 2005 WPT Mirage Poker Showdown for $1,128,278 along with the WPT Season IV Player of the Year award in 2006. Smith won the 2006 Poker Dome Challenge for $500k. He won his first WSOP bracelet in 2010 in a $2,500 mixed Hold'em event to go with 18 in the money finishes. Smith's total live tournament winnings exceed $5,375,000. He was part of the popular podcast duo with Joe Sebok on PokerRoad Radio. Smith was born September 4, 1968 in Guelph, Ontario, Canada and currently resides in Las Vegas, Nevada.

Gavin "birdguts" Smith is entering a new phase of his career, prioritizing his new family over the excesses and poker-centric lifestyle of the past. He retains his natural talkative nature, but with less of the crazy antics of the past.

Smith videos of a good call, Poker After Dark against Phil Ivey, and an interview after winning his WSOP bracelet: