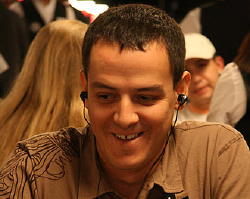 Carlos Mortensen is the most decorated Hispanic professional poker player ever. He won the 2001 WSOP Main Event, won another bracelet and has 21 cashes to bring his live tournament winnings to nearly $10 million. Mortensen has won three big WPT titles, including the Season Five World Poker Tour championship event for nearly $4 million and most recently the 2010 WPT Hollywood Poker Open. Mortensen was born April 13, 1972 in Ambato, Ecuador, moved to Madrid, Spain when he was 15 and currently calls Las Vegas home.

Carlos "El Matador" Mortensen is known for his loose and aggressive style. He focuses on playing for first place, taking calculated gambles to attack when he smells weakness. "Anytime I can bust someone, that is the right thing to do. If I smell weakness, I attack. Either I bust them or they bust me.” Although he is famous for his unpredictability at the tables, Mortensen knows what is important to maintaining his success, saying that staying focused is the most essential part of being a winning player. Mortensen also claims that a major contributing factor to his success is his ability to remember opponents’ betting patterns and tells.
“I believe that poker is a people game played with cards, not just a card game played by people,” Carlos once explained in an interview. “I think that all players have limits, or situations where they become uneasy, and that is when I put them to the test.”
Mortensen interview and final WSOP Main Event poker hand: