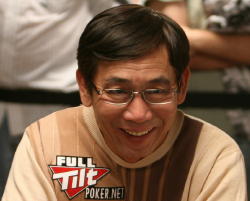 Chau Giang is one of the largely unsung but hugely successful poker players that plays high stakes mixed cash game. Playing a very limited tournament schedule, Giang has won three WSOP bracelets and 51 WSOP cashes, along with three WPT final tables totaling more than $3.5 million in live tournament winnings. For many years, though, Giang has played in the high stakes games of Las Vegas, specializing in mixed games. A regular in "the Big Game" at Bobby's Room where for years they played $4k/$8k limit games. Barry Greenstein once pronounced him as one of the only five truly profitable players in that game. Chau was born July 2, 1955 in Vietnam and currently resides in Las Vegas.

Despite the occasional tournament and WSOP events, Chau Giang continues to do well in all high stakes cash games. He joined Phil Ivey, Tom Dwan and others in Macau recently where he played ultra high stakes poker against some Chinese businessmen. Giang won a €1.9 million pot when his opponent went all-in on the turn with a full house, but Giang had a better full house. The board was J-J-T-A-3 and the Chinese player had A-J, and Giang had Aces.

A video tour of his home and a hand where Giang makes a betting mistake but calls out Lederer's hand: