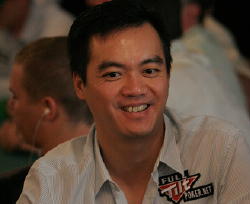 Despite his quiet demeanor, John Juanda is one of the most respected poker players in the world. He won the 2008 WSOPE Main Event for $1.5 million. He has five WSOP bracelets to go along with his 55 WSOP cashes. His first major victory was at the 2001 World Poker Open.

Juanda has numerous other tournament victories and six WPT final table appearances to bring his lifetime tournament winnings to over $10.8 million. He is a member of Team Full Tilt. He also have one of the strongest 2010 WSOP performances with four big cashes totaling over $700k. He won his fifth WSOP Bracelet in the 2011 $10k 2-7 NL Lowball Championship. Juanda was born July 8, 1971 in Medan, Indonesia and currently lives in Marina del Rey, California.

John "Papa John" Juanda is one of the most understated but respected cash game and tournament players in the world. His Budhist background has given him a grounded and calm center within the turbulent poker world. He has used his poker success to support a breast cancer clinic and put a girlfriend and his sister through college.
"I try my hardest to win, but I respect everyone I play with, and when I lose, I don't get upset. One of the teachings of Buddhism is to have a sense of balance. I take satisfaction in doing my best and don't have overly high expectations."
A couple videos of Juanda on Poker After Dark and a hand against Daniel Negreanu: