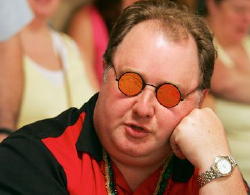 Greg Raymer is one of the endearing tournament figures in poker. He won the 2004 World Series of Poker Main Event with his characteristic holographic sunglasses and his fossil card protector. The following year Raymer finished 25th out of 5,619 entrants for a $304k cash in the WSOP Main Event. At the 2009 WSOP $40k NLHE event, Raymer took third for nearly $775k. Raymer has live tournament winnings that exceed $6.85 million.

Greg Raymer has also had online success winning his first World Championship of Online Poker in the PLO with rebuys Event #6 of 2007 for $168k and finishing second twice in the Sunday Million. Raymer has been a visible advocate of poker in Washington D.C. and as one of the original Team PokerStars Pro team. Raymer was born June 25, 1964 in Minot, North Dakota and presently resides in Raleigh, North Carolina.

Greg "FossilMan" Raymer considers himself a role model and has worked hard to represent poker in the most responsible manner possible since his WSOP Main Event win in 2004.
Raymer once said "There are generally only three decisions in poker: bet, fold, or raise. That means that anybody should be right about 1/3 of the time. Genius at poker is based on sound logic supplemented with the art of reading your opponent.
Commenting about what players can do to improve, Raymer says "The luck element is fixed, and there is little you can do to reduce it. But with your skill you can increase your edge so that the amount you win before the luck factor is larger."
Raymer adds "Happiness is almost entirely internal. There are happy people who live in near poverty, and unhappy billionaires. You're happy because you want to be happy, unless life is throwing you complete hell."