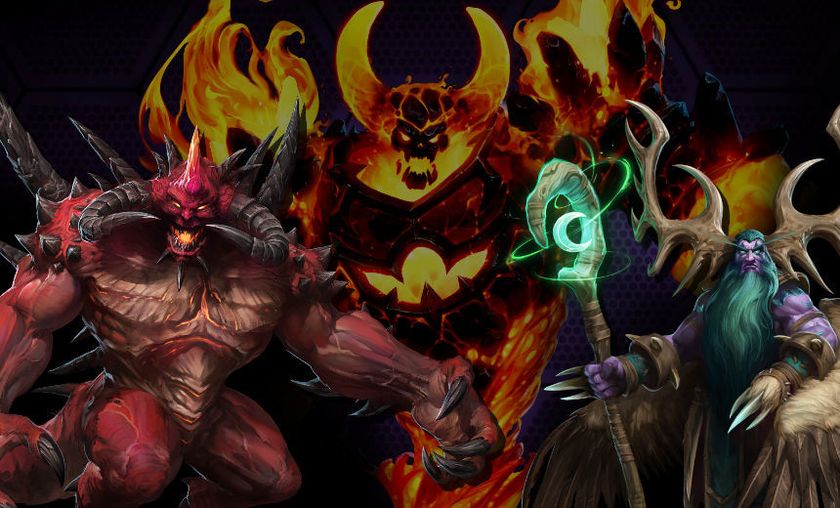 Ragnaros, Malfurion and Diablo are top tier heroes all on their own but together they offer teams a devastating wombo-combo. Get your first bans ready, because you are going to see a lot more of these three heroes.

At GosuGamers, we love Heroes strategy and draft compositions that can give players an edge. A little draft knowledge goes a long way, and even a single player can influence the game with thoughtful hero picks that counters the enemies draft. We saw Fnatic use Chromie to fantastic effect in countering Auriel compositions and the win was so dominant, it forced the majority of us to reconsider our view on just how tournament worthy Chromie can be.

But to start off this series examining the compositions used during the HGC, we look at a draft that doesn't require much meta-knowledge at all. Frankly, anyone who has played Hero League in the past 2 weeks knows exactly about this trio, but it was only last week during the first series of HGC matches that we saw it's power in full effect.

I'm, of course, talking about Diablo, Malfurion, and Ragnaros. The easy to draft Warrior, Support and Assassin trio that can fit nearly any team composition on any battleground. All they need beside them are a form of ranged sustained damage or even a second-tank-- two things never in short supply.

For example, Team 8 opted to draft this trio alongside Tassadar and Tracer (and already established pairing), making their draft extremely difficult to properly counter.

This helpful Reddit post pulls statistics from Hotslogs and provides easy to grasp numbers regarding the win-rates of heroes and different hero type compositions. Turns out, solo Warrior Diablo and Solo Support Malfurion have an above average win-rate. Ragnaros has an above 50% win rate as well!

The statistics aren't surprising, but they do reveal one of the strongest things about this trio. It's very non-committal. If you only one of these heroes your draft is still looking just fine.

But when all three come together, it's a match made in heaven.  These heroes alone constantly threaten a game-winning combo: Apocolypse into Sulfuras Smash into Twilight Dream. Unlike other powerful combos that are reliant on a specific synergy to justify their draft (Jaina and Zeratul or Leoric and Zarya), this trio remains flexible and open to adjusting their playstyle to the demands of the game:

Just look at the damage Misfits is able to dish out with their team in this clip taken from full game embedded below. Ragnaros secures the kill on Tychus and mops up after a devastating Apocalypse into Twilight Dream. Their Heroics pull them out from a game they were previously losing and is a surprisingly common scenario when running this trio.

Here are some talents that you should consider when running this draft:

Every time you kill a Minion with Empower Sulfuras, its damage is increased by 1, up to 30.

Reward: After killing 30 Minions, increase its damage by an additional 120.

This talent solidifies Ragnaros's strength as a solo-laner and is very powerful in the early stages of the game, as the flat damage increase is much higher than usual damage upgrades. Completing this quest early is crucial to snowballing the early game team fights in the Ragnaro teams favor.

This talent synergizes perfectly with Diablo and is everything he needs to close on targets and secure kills. As you will likely be running Diablo as a solo Warrior, Slow Burn also allows him an escape option he normally doesn't have.

Diablo and Tyrande have always been a strong combo for a synchronized team because of Overpower + Lunar Flare combo. Sulfuras Smash is essentially a super-powered version of Lunar Flare, so all of the inherent synergy with Diablo remains.

Increases the range of Regrowth, Moonfire, and Entangling Roots by 30%.

Whenever you pair Malfurion with reliable stuns, Elunes Grace is going to be your go-to talent. The increased ranged allows more follow up Entangling Roots with more accuracy. A failed Roots can mean the difference between killing an enemy hero and not.

After 0.5 seconds, deal 374 (+4% per level) damage in a large area around Malfurion, Silencing enemies making them unable to use Abilities for 3 seconds.

We have entered a meta where most players become justifiably upset when a friendly Malfurion takes Tranquility over Twilight Dream. If someone told me this a year ago, I wouldn't have believed it. The biggest downside of this heroic is Malfurion runs the risk of becoming targetted down while moving into position. However, Ragnaros demands so much attention from the enemy team, Malfurion will usually have a very easy time hitting multiple enemies with huge Twilight Dreams.

This is a self-explanatory talent for Malfurion. More roots, more targets trapped, and for a longer duration. This is why you pair Malfurion with heroes like Diablo.

Level 4: From the Shadows

Increases the range of Shadow Charge by 33%. Enemies knocked against terrain are stunned for an additional 0.5 seconds.

A good Diablo player lives and dies by Shadow Charge use and this talent is crucial in surprising your opponents when they don't realize they are out of position. Diablo is the only hero that can truly initiate out of this duo so you will want to focus on these talents.

Create a demonic rune under each enemy Hero on the battleground. After 1.75 seconds the rune explodes dealing 137 (+4% per level) damage and stunning them for 1.75 seconds.

While Flame Breath is a powerful Heroic, it's not what you want from a combo-oriented lineup like this trio. After Shadow charging a target, Apocalypse followed by Overpower is a very reliable stun set up that creates a safe area for Ragnaros and Malfurion to aggressive position themselves in a fight. Even if Apocalypse doesn't hit every enemy hero, it always forces them to move out of the way, giving your time a window to engage.

Teleport and place a demonic rune at target location. After 1.75 seconds the rune explodes dealing 137 (+4% per level) damage and stunning enemies for 1.75 seconds.

This is a tricky talent that, once mastered, makes diablo one of the most frightening solo-engage heroes in the game. When all of your stuns align perfectly, the follow-up Sulfuras Smash is impossible to whiff and ensures the kill on anyone but the toughest of tanks.

As we mentioned previously, this trio is comprised of 3 of the strongest heroes in the game currently, so you can't really look to the draft screen for a clean counter.  The way to beat this trio is understanding the type of fights it looks to initiate and avoiding them at all cost. Thrall's Earthquake seems good on paper but leads to clumped up team fights that the trio ultimately benefits Ragnaros and Malfurion. Mighty Gusty, Leyline Seal, and Sanctification are more helpful tools in combating their team fight strength, but they alone aren't enough.

A team facing this trio must punish as hard as possible once either of the trio's impactful heroics whiff or are used ineffectively. Bloodlust is perfect for this type of turn-around engage, as seen from this clip taken from full game embedded below:

Superstars started the engagement with Bloodlust and forced Diablo to try and react with a defensive Apocalypse (ie, the weakest kind). This coupled with the Dehaka flank from the bushes disrupted the sequencing needed for this trio's combo to flat out win a team fight and set the engagement on Superstars terms.

Last week revealed to us the true power level of Ragnaros and a big part of his strength his how universally desired all of his abilities are. That means, when building a draft around him, it becomes less about covering his weaknesses and more about highlighting his strengths. Diablo and Malfurion to this perfectly and enable his most powerful tool, Sulfuric Smash, to his with deadly precision extremely reliable.

To master this trio it just takes practice and trust in your allies abilities to all see the same opportunity and act upon it. The talents outlined above all make this easier, but will always come down to a team's communication and a shared understanding of the draft's strengths.

Do you have a group of friends capable of executing? If so, be sure to sign up for your respective regions HGC Open Division qualifiers!

Do you first ban Ragnaros, Malfurion or Diablo?