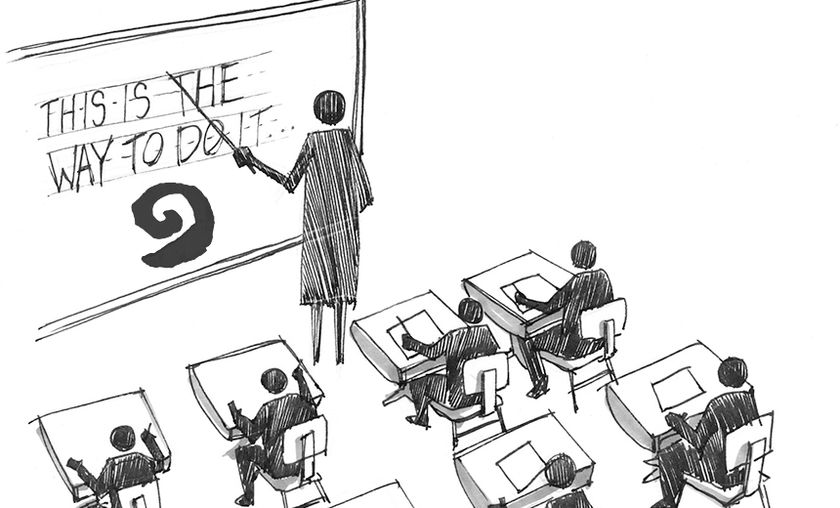 Card games are complex. These games are not just about playing cards every turn until one player is dead and the other triumphs, just like how StarCraft 2 is not about mass producing units with no cohesion and rallying them across the map. Becoming a good card game player and escaping the “newbie” zone, even in a game like Hearthstone which is infinitely simpler than TCG mastodons like Magic: The Gathering, requires profound understanding of card game fundamentals.

In “The Hearthstone Classroom” series, we will be talking, examining and exemplifying said fundamentals so we can better understand how a Hearthstone match or deck works. What does “tempo” mean and how is it different from “card advantage”? What’s a “midrange” deck and what does it look like? What is a good “mana curve” and why is it important? How a deck is built, tested, analyzed and improved? And how does all that apply to arena?

For this first episode, we’ll be covering deck archetypes and playstyles and length. Ready? Here we go.

In card games like Magic: The Gathering there exists a triplet of “classic” deck archetypes: aggro, combo and control. This is the basic level of deck types, on top of which you will find the various hybrids like aggro-control, combo-control or midrange. In this article, we'll take a look at the four most common archetypes in Hearthstone.

Aggro decks want to finish the game as quickly as possible by playing minions and attacking with them. They start strong and wither off in the late game.

Control decks are at the other end of the spectrum. They want to outlast their opponents by killing their threats until they can play their big finishers.

Combo decks rely on interaction between multiple cards to produce a lethal or otherwise powerful effect and finish the game in one or two turns.

Midrange decks are also minion-based but are slower than aggro and quicker than control. They take the good of both worlds and aim towards board control through minions and generating incremental advantages.

These archetypes peak in strength at different times of the game. In his article describing the midrange deck in MtG, Ken Nagle uses three graphs to illustrate that. 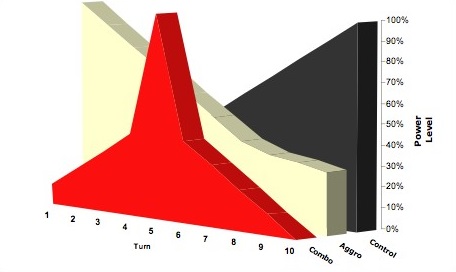 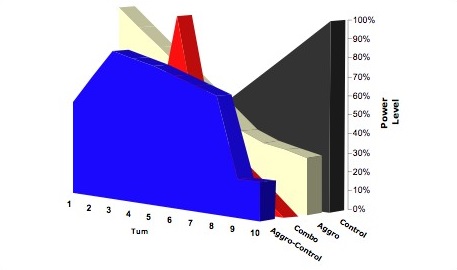 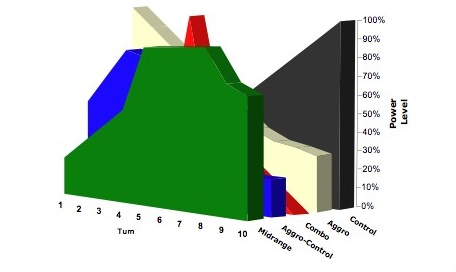 Although Hearthstone and MtG are different games, the archetypes' peaks are more or less the same. Aggro starts strong and slows down later; control spikes in the late-game; midrange has a strong presence all the way through, but is never as potent as the two extremes in their peaks; and combo decks live for their one or two turns of glory where they seal the game (the Turn 5 spike should not be taken literally, it merely represents the turn where the deck "goes off").

Now that these abridged definitions are out of the way, let’s dive deeper. Step one: the kings of killing you swiftly, a.k.a. the aggro decks.

Before we go even more in-depth, let’s dot down the cornerstones of the aggro strategy:

“Damage through minions” is a phrase that best describes an aggressive deck. Aggro decks have high saturation in their low end of the curve (meaning they have lots of 1-2-3 mana minions) as they want to apply pressure as soon as the game starts. They employ very few removal spells and even fewer card draw spells. Because of the latter, they usually have a “timed life”: if they can’t finish the game quickly enough, their power withers and they fall prey to a stabilized slow deck, as the latter will run bigger, stronger threats.

Despite what we just described, aggro decks are not all about blind aggression. Even though such decks do exist, running a lot of charge minions and throwing every single point of damage to opponent’s face, many aggro decks in Hearthstone will use their proactive nature to trade and establish board and game control that way.

Aggro decks are not necessarily all about blind aggression.

An important note we have to make is that aggro decks in Hearthstone differ from their MtG counterparts, or at least we will treat them differently because of the nature of the two games. MtG aggros aim to finish the game around turns 4-5, which is quite difficult to accomplish in Hearthstone because of the larger health pool and the low cost of AoE damage spells. Thus, when we talk aggro we’ll also talk about decks which don’t necessarily aim towards a T5 finish but still employ the concept of proactive and aggressive minion-based playstyle.

This is also where aggro and midrange (an archetype we’ll examine further in the article) can get messed up. Many traditional Hunter decks, for example, are dubbed “midrange” due to using [card]Savannah Highmane[/card] and/or [card]Sludge Belcher[/card], but their powerful early curve, large minion count, limited disruption and their Steady Shot ability could classify them as aggro decks as well. That’s also how we’ll treat them for the examples below.

That said, let’s take out the magnifying glass and examine the aggro decks closely: how do they curve and what type of cards they use.

Above, we’ve broken down three of the most popular aggro decks in the current meta: Zoo, Mech Mage and standard (not “full face”) Hunter. In all of the three, you will see common themes: they run upwards of 22 minions, which is at least 73% of the deck; they are heavily saturated between 1 and 4 mana; and they run only a handful of fatties so that the deck is not completely naked in the later stages.

Of course, there are differences between aggro decks. Zoo (left) is not afraid to have more early drops than anyone else (22 one and two mana cost minions and spells in total) as it knows that Life Tap will resupply its hand. The Hunter (right), can afford slowing down its curve, because it knows that Steady Shot will still apply pressure on the opponent and some decks even play [card]Sludge Belcher[/card] to counter other aggressive decks, hiding behind a fat taunted while still dealing damage to the face. The Mech Mage (center) looks even slower with half of the deck being on 3 and 4 mana but it has the [card]Mechwarper[/card] which essentially speeds the curve back.

The diametrical opposite of the aggro, the control strategy strives to outlast rather than beatdown.

A good control deck has a nice balance between removals, utility cards and finishers.

“Outlive and outlast” is control decks’ hymn. Tailored to suit a patient, defensive playstyle, control decks are friends with removal cards and Hearthstone’s biggest, most scariest minions. Unlike aggro decks, control decks are reactive and they’ll rarely/never be the one taking the initiative.

Even though it’s arguable, control decks are considered the more difficult archetype to play in Hearthstone, especially when it comes to novice players. The control playstyle requires careful knowledge of its various opponents: how much damage can they deal in how many turns, what are their scariest cards, which threats are left, what is the most efficient to react to a certain board. This kind of information is vital to the control player so he can best plan his turns and play his removal/utility cards in an optimal way.

A good control deck is built in such a way that it has a nice balance between removals/direct damage spells, utility cards (card draw, life gain, silence taunt, freeze, card steal, etc.) and finishers. Below, we take a look at the curves and card type balance in some of the most popular control decks in current Hearthstone: Handlock, Warrior and Frost Mage.

What do we learn looking at these graphs?

If we take Handlock and Warrior, for example, we see that control decks want to have a solid presence all throughout the game. Even though they’re late-game focused, their curve isn’t skewed to the right because filling up on finishers without a way to live till them is counter-productive. Thus we have the low curve filled with cheap point removals, the middle stacked with utility cards and mass removals and the end featuring the handful of finishers that close the game.

What about Frost Mage then? Even though its curve seems a bit uneven, its playstyle mirrors that of the other control decks. The cheapness of its removals and utility cards skew the curve towards the low end but many of its cards are often used together in the mid-range turns, e.g. [card]Doomsayer[/card] + [card]Frost Nova[/card] is a board sweeper which occupies the otherwise empty 5-mana slot. Frost Mage also barely runs any minion finishers, the two exceptions being [card]Alexstrasza[/card] and [card]Archmage Antonidas[/card] and most of the times it kills via [card]Fireball[/card]s and/or [card]Frostbolt[/card]/[/card]Ice Lance[/card] combos.

This last point also illustrates how cards in control decks can often serve multiple purposes. [card]Mortal Coil[/card] is a removal and card draw at the same time. [card]Shieldmaiden[/card] and [card]Loatheb[/card] are utility cards which come with a heavy body. [card]Whirlwind[/card] is an AoE damage card which can also gain you life from [card]Armorsmith[/card] or draw you cards through [card]Acolyte of Pain[/card]. Finally, we have cards like Handlock’s [card]Twilight Drake[/card]s which don’t fit in any particular category and are more or less removal baits.

Midrange is one of the more difficult to explain and illustrate archetypes as it features playstyle elements of aggro and control without being in either extreme.

The line between aggro and midrange is rarely hard and fast.

The line between aggro and midrange decks is rarely hard and fast. Many aggro decks can be seen using some or all of “fatties”, spell support and buffing effects while controlling the board, which could beg the question aren’t they, in reality, midrange decks. In many occasions, there isn’t a clear answer.

Other classes who are often played in a midrange way are Priest and Shaman. We take these two and a throw in a ramping Druid to exemplify curves and card type balance.

Similar to the control decks, these three midrange builds are solid all throughout the curve and are able to make value plays on each turn, whether it’s answering a threat or playing one themselves. The difference here is the card type balance. Midrange decks are 2/3 composed of minions, most of which are built for punching, in contrast to control decks’ minions who have a more utility purpose. The other 1/3 are various spells, a number significantly lower than the one you’ll see in control decks.

Combo decks are the most under-represented archetype currently in Hearthstone (and card games in general) and feature a unique playstyle.

Blizzard’s vision of how Hearthstone should be played goes directly against combo decks: one-turn-kill (OTK) decks are rarely seen in the GvG meta, largely due to the mana nerf to [card]Leeroy Jenkins[/card].

That’s why we’re going to keep this section short by just going over the popular combo decks in Hearthstone’s history.

Why no curves and card type breakdown you ask? That's because of the nature of combo decks. Even though their curve and card type balance will resemble that of control deck, they will, in reality, "curve out" or "spike" when they assemble the combo. A Miracle Rogue deck, for example, will have a balanced curve on paper but in reality he will play most of its spells on T6 or T7 when it gets a [card]Gadgetzan Auctioneer[/card] with enough spells to trigger it.

With this, I leave you until the next class! Hope you enjoyed "The Classroom"'s debut.