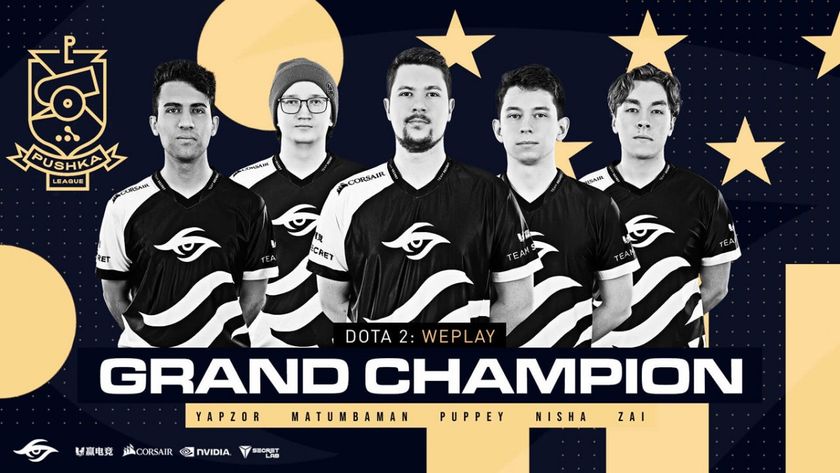 Team Secret was one of 14 teams participating in the playoffs for the event. Their upper bracket quarterfinals challenge was in the form of Natus Vincere which they overcame quite easily. After beating Team Liquid in the semis, Secret met VP.Prodigy, a team created less than 2 months ago. VP.P came into WePlay! Pushka League as an underdog. Their performance, however, outdid even some of the veterans in the scene.

It didn’t take much effort of Team Secret to defeat VP.P and move on to the Grand Finals. VP.P fell into the lower bracket where they met a Team Liquid who recently took care of VP’s main lineup. Casters, fans and almost everyone was certain that VP.P was not up to the task to defeat Liquid.

VP.P’s performance, however, defied all expectations as they made quick work of the opponents and 2-0ed Team Liquid in quite a convincing fashion.

The grand final teams came out as Team Secret and VP.P battling it out for the prestigious title and the prize money of $70,000.

Team Secret showed why they are the best team in the world as they won the grand finals without dropping a single game in the best of five series.

With an unorthodox support Sniper, Team Secret got the better of VP.P right from the draft. VP.P at some point seemed to come back in the game but in the end, it was Secret who came out as the decisive victors of Game 1.

On the back foot, VP.P decided to go for a heavy team fight draft revolving around a core Faceless void for Game 2. Team Secret responded with even more team fights as they drafted around an Enigma and Earthshaker.

Despite it looking like something that would go at least 45 minutes, Team Secret forced VP.P a gg call in just under 17 minutes with the scoreline 19-3 in favor of Puppey’s squad.

When it all came down to the final Game 3, VP.P went for comfort picks rather than counter picks or planned strategies. However, Team Secret seemed to be on another level as even comfort picks were not enough to take a single game from them.

The team's push strat couldn’t be handled by VP.P and Secret was knocking on their base before the 30-minute mark. With the entire team dead, VP.P could do nothing but watch as Team Secret took down the base and the throne to claim one for themselves.

Although Secret was the strongest team at WePlay! Pushka League, VP.P should be considered as an emerging talent as they were able to place 2nd on an event with T1 teams and eventually lost to the world's best.

Meanwhile, in Division 2, Vikin.gg swept through Team Unique 2:0 after advancing to the grand finals on a forfeit win against Yolo Knight. Both teams didn't earn much - $2,000 for first place and $1,500 for second place - but the teams will be heading to Division 1 for the next season.

Do you think VP.P is going to become a Tier 1 team pretty soon?