GosuCup is back on Tuesday night

Sadly we had to cancel last Tuesday's GosuCup due to various problems, but now it's back and hopefully you'll enjoy it. It's on Tuesday 24th at 17:00PST, 20:00EST, 02:00CET just like last time

We've also yet to post the replay packs from the last two GosuCups. This has mainly been because we've had some troubles getting a hold of the replays from #7. Now we've gotten the majority of them so hopefully you won't be too disappointed. Check the link section in this news for both GosuCup 7 and 8 replays.

We also have a short interview with the winner of GosuCup 8, Ptak.

You've played in a few GosuCups, how come you did so well this time?
What can i say? I'm Julys older brother. I've played this game all my life and moments like this make this game more better to me...

In the final you met Chosen. Did you know him before?
Ohh yeaaa he take W.O vs me at GGSL so im still mad on him because of that...He is not bad zerg but im older and more fat...so he have no chance this time...last game muta micro was good shit!

Zvz is your best mu?
no ppl think that becouse i rape one season all zergs on PGT and i get A+ 14000 pts playing 80% zvz but that was only that season and i was playing for RANK from then i play all mu-s and im in love with ZVT...and yes i would like to beat RET one more time...he was little bm in tourney. 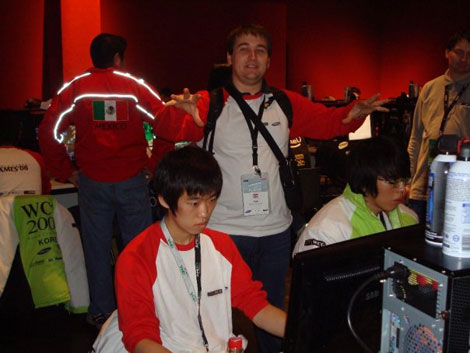 Which of your opponents was the toughest one?
That guy Oystein becouse he lag like hell and i still cant bilive i lose first game...not that i say he play bad or anything he played ok but i have so big advantage and all but i lose any way...i learn that i lose to much games that i have big advantage and i play best when im underdog or im losing...

Did you like the organization of this gosucup?
Yea it was IMBA fast answers and very good admins with very nice organisation...i was late to final and they msg me to msn and and wait...it was like Hilton service.