LGD.God: 'It's bad winning your games without any problems'

General 26/03/2013, 17:30 Linus “Tjernobylbarnet” Staaf
The man behind the mid lane, the Russian player known by the modest name "God", now taking residence in China talks about having no life, scrimming, winning and losing.

The interview is translated from the following video where Faker and Inmate conducted an interview with God in Russian.

Faker: I am sorry for your loss against Orange, but let’s talk about the game later. First of all I want to ask you about your personal life in China.

God: I have no personal life here.

Faker: How's your life in China? Are there any differences between the life here and the life in Russia, besides the cultural ones? Where do you feel more comfortable?

God: Basically, there's no big difference. I'm just trying to survive and go by. But in China it's more difficult as food is spicy and there are a lot of Chinese. But seriously, I don't feel the difference. I only have a no-lifer style of life here and rarely go out.

Faker: I see. Do you live in a big city?

God: Well, it’s one hour by car from Shanghai. The cost of living here is expensive. Land and flats are pricey, but the city isn't that big by Chinese standards.

Faker: Speaking about communication. Did English and Chinese skills improved after you moved?

God: Before I came to China, my English skills were pretty good and I tried to pronounce words properly. After I moved here and started speaking English on a daily basis, I became lazy and didn't hide my terrible Russian accent. However since everyone understands me; I have no motivation to get better. Bitter truth.

Faker: I have a question which I prepared 2-3 days ago. In an interview, v1lat said that whenever Dendi is in China he's travelling with bodyguards because there are a lot of fans there who want to get his signature. Is it the same for you? Are you getting recognized on the streets; since cyber-sport is a pretty official thing in China. Is there any difference between Russian and Chinese fans?

God: The main difference is that the number of Chinese fans is higher. It happens sometimes that people recognize me, but not too often. Mainly, because China is a big country and not everyone plays Dota here. Most people do, but some don't even know who the professional players are. At least half of the Chinese fans are still playing Dota 1.

Inmate: Is that because of the lack of invites?

Inmate: The most common question: how are things with girls?

God: ...what do you mean? I told you I have no personal life. I don't even sleep. I spend all my time in front of the PC.

Inmate: Is it true that there are StarCraft and other games broadcasted on TV? Do you even have an opportunity to watch television?

God: No, I don't watch TV. Perhaps, if I want to, I can visit some Chinese friends to do it, but I don't really want to. I've been watching TV while I was in Shanghai during the G-League. We had television in our hotel room and there were cyber-sport channels available where live streams of some random games were shown. But it's terribly hard to understand when some boy and girl are playing games in Chinese. 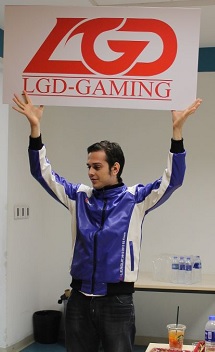 God carrying LGD-Gaming
Faker: You've been part of many organizations - Moscow 5, Darer and now LGD. What can you tell us about the level of Chinese organization? Is it better or worse than the CIS ones?

God: Well, everything is really serious here. So serious, that they are going nuts from their seriousness.

Faker: No one is kidding around there?

God: Everyone seems to be friends, but everything connected to public relation is very serious. I once blurted about some team that I can't say much about right now. But we had just played several clan wars and that’s all. And that evening our manager messaged theirs and apologized. I don't really understand it.

Inmate: God, what do you think about VirtusPro considering heroes like Gyro, Wisp, Undying as very strong and picking them up, when no one in China is using those heroes?

God: There have always been obvious distinctions between different regions. One hero is picked in Europe, and others in China. There were always some global tourneys where representatives of both regions were participating. And, generally, the winner of those games dictates further metagame for the whole world. That's how Templar Assassin became a common midlaner after The International 2. And, believe me, Chinese know the hero Wisp, they know what buttons to press, it's just a matter of habit. Every Chinese team has their own hero. Some teams might not even take a hero seriously, but other might be seizing it as a first pick. There is a similar situation in Europe, as far as I can see.

Inmate: LGD.Int is a mix team from different western countries. USA, Europe, why don't you bring your own playstyle instead of transitioning to the Chinese one - 70 minutes games, turtling.

God: I can't really say that we're playing in the Chinese style. I'm really happy that we took part in GEST where we've noticed what should be improved. Sometimes when you lose while playing clan war, you can say that you were just in a bad mood. And though we were playing online tourney, we were trying to win. And, to be honest, we have never really won a clanwar versus Orange. We won only once, when we had just come to China. But when it came down to a serious game, we realized that we were afraid of them.

Faker: Do you want to visit any CIS or EU LAN tournament? StarLadder for example?

God: I'd love to meet the people I miss. I miss v1lat and his streams. Generally, I'd love to visit, but not to play. Everything suits me here.

God: Well, when we just started to play as a team, I was playing as the initiator - running forward and setting a hero we focus and kill; and then dying with a clear conscience. We were playing the same way for G-League. I was playing same heroes on mid but then we were declassified. Right now, we aren't doing as good as before so we are trying to invent something new. In that game we decided that the game is going to be long so we should pressure them all the time, hence me playing Clinkz.

Inmate: Question about Na`Vi - What do you think about their new roster and about their plans for bootcamping in China?

God: Well, I hope they will stay not far from Guangzhou so I can meet them. I would also like to play versus them. But actually I have enough opponents here to play against and to progress. It's bad when you win your games without any problems because you make no progress that way. So I am up for any strong opponents that can win against us. Faker: Do you follow any European or CIS tournaments or you're just keeping your eye on Chinese scene?

God: Well, I watch some European games, but mostly only the teams which I like. I also support my friends.

Faker: Which teams are you supporting?

Inmate: You still didn't answer a question about new Na`Vi roster. It's good that they'll come to China, but what do you think about Funnik and Kuroky?

God: I liked their previous roster as well. This one is more nerdy, if I may say so. All five people will spend more time playing Dota, then before. Don't know if it will work out or not.

Inmate: So you are saying that someone can play Dota more then Lost?

God: Well, he hasn't been playing that much recently.

God: It just happens sometimes, that people annoy each other. And in some moment the five Na`Vi players couldn't act as five. I don't know who initiated it and not sure that you can find out the truth, but anyway, if changes were necessary, then everything is good.

Faker: Question about heroes. Lycanthrope and Morphling aren't picked that often in European scene. What about Chinese?

God: Morph isn't picked anywhere, believe me. I saw him today for the first time. I don't even know what skills he has. He's waving, pumping stats, hard to kill, he's everywhere. But seriously, Morph isn't picked. Lycanthrope is a hero I was thinking about while playing in Absolute Legends. He was nerfed once, but now he just can't jungle. He's still strong on the lane. So when we see that Lycan can chew on enemies and crush their buildings with impunity, we pick him, because this hero isn't bad. He's not super versatile, but still.

Inmate: Do you have any information about The International 3 to accidentally give away?

God: I accidentally don't give away any information.

Faker: So, do you have any shoutouts?

God: Big thanks to LGD organization, thanks Razer for devices, thanks Taobao. Shoutout to all our fans. Play Dota or don't play, as you wish.