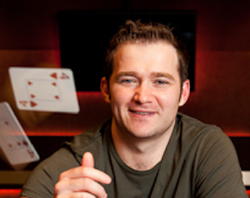 Eugene Katchalov is one of the true undersung talents of the poker world. His biggest win to day is the 2007 WPT Doyle Brunson Five Diamond World Poker Classic for nearly $2.5 million. That same year he also won a Bellagio Cuip $5k NLHE event. Katchalov has 15 WSOP cashes. Katchalov came in third in the 2009 EPT London High Roller event. He also took third in the WSOP HORSE Champion ship for about $250k. Most recently at the 2011 PokerStars Caribbean Adventure, Katchalov won the $100k Super High Roller tournament for $1.5 million, defeating Daniel Negreanu heads-up. He has over $6.1 million in lifetime live tournament winnings. Katchalov was born February 21, 1981 in Kiev, Ukraine and resides in Brooklyn, New York.

Eugene Katchalov was recently named as the newest member of Team PokerStars Pro and will know play as E. Katchalov.
Katchalov commented "It is the largest and, in my opinion, the best-run poker site in the world, with a great team of pros. I look forward to continuing my great run in poker and helping PokerStars successfully expand and evolve within the ever-changing world of poker.”
Katchalov video interview after his PCA win, some coverage of his EPT third place, and a chip and a chair story from the WSOP: