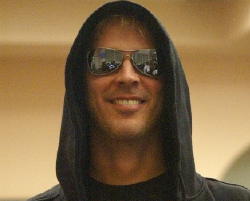 Phil Laak is an iconic poker player, recognized both for his exuberant personality as exhibited in his role as "the Unabomber" or with his elaborate prop bets, and also for his on-table poker success. His first major tournament victory was the World Poker Tour Celebrity Invitational in 2004. Laak won the inaugural William Hill Poker Grand Prix in 2005, finishing runner up to Johnny Chan in a WSOP event that same year. He won the 2009 PartyPoker.com World Open V. He won his first WSOP bracelet in 2010 in London in a ₤2,500 buy-in Six-Handed No-Limit Hold’em event. His live tournament winnings top $2.3 million. Laak was born September 8, 1972 in Dublin, Ireland and now resides in Los Angeles, California.

Phil "The Unabomber" Laak has skillfully carved a unique persona in the poker world. He is a fun loving and gregarious personality while often disarming his opponents and using it to his advantage. He has a penchant for the showy, as exhibited by his Hollywood girlfriend and desire to be in numerous movies.
Laak's motto is "Living well is all about optimizing and achieving a balance between fun, freedom and fulfillment."
Laak videos showing a good call, an interview during his Guiness record, and a funny hand with Phil Hellmuth: