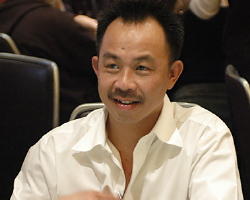 David Pham is a very consistent poker professional. He has won 2 WSOP bracelets with 25 cashes. He won the 2003 L.A. Poker Classic and the 2004 LHE event at the Five Diamond World Poker Classic. Pham has made 7 WPT final tables and $8,350,010 in live tournament winnings. He was CardPlayer's Player of the Year in 2000 and 2007. He is a sponsored Full Tilt red pro. Pham was born on February 10, 1967 in South Vietnam and currently resides in Cerritos, California.

David "The Dragon" Pham prefers to play an aggressive style of poker that relies heavily on his reads. He plays a lot of events in Southern California, while traveling to many WPT and WSOP events. Pham is very thankful for his life.

“I go back home [to Vietnam] very often. Sometimes I don’t go but I still send them money. My older sister works in the church, so she always knows where she’s going to find the poor people, the kids with no parents, and the sick people. When I go home I bring them money and give for the charity.”
“I think probably I make more final tables because everything is OK. My family is OK, my mind is fresh and my energy around me is not disturbed, so I can play well. Usually my mind isn’t bothered or anything, so I can play good. Sometimes any pro poker player can lose his mind because of maybe their family or friends or just financial problems. I believe in that. You don’t let anything bother you so you can play well, read others well, have patience – and sometimes you run good too.”
One hand at the PCA and one interview on the WPT: