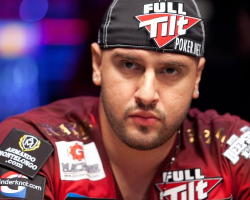 Michael Mizrachi is an American professional poker player who has had tremendous success in patches over the last half decade. He won the WPT 2005 LA Poker Classic and the WPT 2006 Borgata Winter Open. After some lean years, the 2010 World Series of Poker represented a huge comeback to prominence and prosperity. He won the $50k Players Championship, final tabled two other $10k events and finished in 5th in the 2010 WSOP Main Event for over $2.3 million. he has 24 WSOP cashes to go with his 11 WPT cashes to bring his lifetime live tournament winnings to over $11.5 million. Mizrachi was born January 5th, 1981 in Miami, Florida and currently resides in Miramar, Florida.

Michael "The Grinder" Mizrachi is on the upswing after a few lean years. He is an active self-promoter and is launching several poker businesses to capitalize on his poker fame from having made the November 9.

When asked in an interview whether he prefers tournaments or cash games, Mizrachi said...
"I love tournaments. The do-or-die of the situation the sudden death of tournaments is the greatest feeling. I can apply more pressure because each player only has one chance and can't go back into their pocket to keep playing. You get to make more bluffs and pick your spots more. When I sit down at the table people are so intimidated by me and play so cautiously that I keep accumulating chips. In the cash games, people can play less scared since they can always reload if they make a mistake. In a tournament, it's one mistake and you're out."
A couple video interviews with Michael and the most dramatic hand he played at the 2010 WSOP ME Final Table: