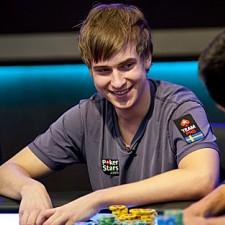 Viktor "Isildur1" Blom, 20, has generated more online buzz than any other high stakes player in recent years. The Goteburg, Sweden based player started to gain notoriety in September 2009 when he appeared out of seemingly nowhere on Full Tilt Poker to take on some of the world's best players. He had been playing and doing very well under the radar on Euro-focused sites like iPoker where he played as "blom90", but his over-aggressive heads up multi-tabling of all comers caught the high stakes world by surprise.

He played fearlessly against the world's best and moved up stakes from $25/$50 to $500/$1000 quickly. Everyone marveled at his multi tabling, long sessions, and big swings, losing or winning millions regularly. He played major matches with Tom Dwan, Patrik Antonius, Jungleman12, Ziigmund, Phil Ivey, Brian Townsend, Phil Galfond, David Benyamine, Cole South, and Brian Hastings. Isildur1's biggest losing opponent was Tom Dwan who could never get a handle on the player and ended up losing over $5 million. Isildur1 reached a peak of profit of nearly $6 million by mid November but by mid December it was all gone and more. He disappeared from the ultra high stakes world and has been seen sporadically in 2010 on Full Tilt or PokerStars, never gaining any particular momentum and generally losing in his short periods of play.

The true identity of Isildur1 has consumed many poker forums and media. Either for tax or privacy reasons, he has continued to keep his verified identity hidden. That seems to be changing now. Viktor "Isildur1" Blom has just announced his partnering with PokerStars to be one of their featured pros. His official identity will be confirmed soon. He is launching a four-table heads up cash game No Limit Hold'Em and Pot Limit Omaha "Super Showdown" challenge to anyone who is willing to play at stakes no lower than $50/$100 for 2,500 hands in one session.

It was recently reported that Viktor Blom is moving to London from his present home of Goteburg, Sweden. He was selling his penthouse apartment in order to be nearer the action in the poker world and receive favorable tax treatment for his winnings.

Viktor Blom, who is presumed to be Isildur1, has built a cult following on the poker forums for his courageous play against the worlds best. He single handedly invigorated the high stakes poker world at a time that it was particularly stagnant. While he has suffered from tilt issues, Blom's single best quality seems to be his aggressive plays (e.g. over-betting the river) that put some of the world's toughest poker players to tough choices at the table. Viktor is excited to focus more on his live game for upcoming tournaments and promotions through his PokerStars Team Pro role.