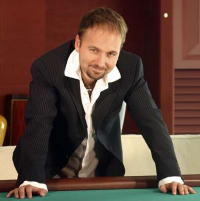 Daniel Negreanu is an immensely popular professional poker player. He has won four WSOP bracelets, two WPT titles and ranks second in the all-time career live earnings list with over $13 million, only behind Phil Ivey. He is one of the most visible poker players through his blog, PokerStars Team Pro, and his regular TV poker appearances, lately on The Big Game, Million Dollar Challenge and High Stakes Poker. He is active in his popular poker forum, Full Contact Poker, and his training site, PokerVT. He was born July 26, 1974, and grew up in Toronto, Canada but now lives in Las Vegas, Nevada when he isn't traveling the world for poker.

Daniel "KidPoker" Negreanu is known as one of the most affable and talkative players at any poker table. He uses his people skills and strong observation to make great reads on players. Traditionally known for liking to play small ball, where he plays a lot of hands post flop, Daniel has been focusing on changing up his online game to better emulate the top young pros crushing the games currently. Never shy to share his opinion, Daniel has received praise and criticism for his honesty and sharing his various poker and non-poker perspectives.