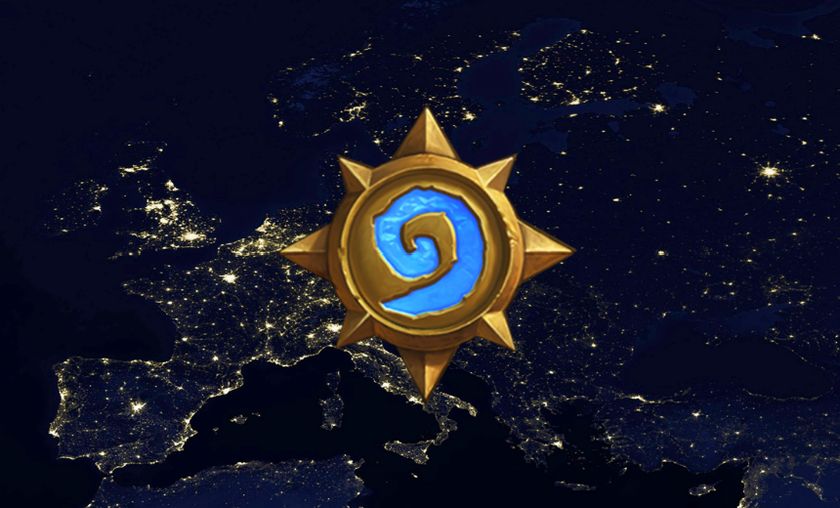 A look at Europe's strength: Statistics going into the Winter Championships and Global Games With the end of January 2017, the end of Hearthstone's Winter Season was marked as well. Players from all around the world now either have made it to the Playoffs (formerly known as Preliminaries), or willhave to fight for another Seasonal Championship. Unlike in previous years, the Seasonal Championships are now held globally. Each region (Europe, Americas, China, Asia-Pacific) sends four representatives who will fight for one of the four available tickets to Blizzcon.

In this article we take a look at the players who qualified for Europe's Playoffs for the Winter Season. Using data collected by Raffael "GameKing" Iciren - who qualified for the Playoffs and is Austria's highest point earner - and Kaan "Fujitora" Çekli - who hopes to qualify through Europe's Tavern Hero tournament, a look will be taken at which players qualified, but more so on which country is looking the strongest going into the Playoffs. At the end of the article we also take a look at the Hearthstone Global Games, and which players automatically have qualified for its first edition by being their country's highest point earner.

Europe will probably be the region with most eyes on it for each Seasonal Championships. Host to the majority of well-known players and tournament series in the game, Europe's scene has been ahead of other regions for a while now. A look at the Winter 2017 Standings already says a lot. Only the top 64 in point-earners are directly making it to the Playoffs in their region, to be joined by eight 'Tavern Heroes' who still have to be determined. The height of the bar is set by the players themselves. If the 64th player has 10 points (and the 63rd has 11), any other player accumulating 10 points qualifies. However, if #64 wins another HCT point on the last day, 11 points is the cut-off, and those who got 10 points fall short 1 point.

Now, apart from China (which uses its own structure), how high was the bar ultimately in the regions? In the Americas, the cut-off for the top 64 for the Winter Season turned out to be 13 points, and exactly sixty-four players have made this. Stepping it up by one point is Asia-Pacific, where 14 points were required to qualify. More than sixty-four players reached this point, seventy-one to be exact. Europe, however, was the hardest region to qualify for, with a point cut-off at 16. Despite the higher bar Europe has, it still has the most players participating in the Playoffs: eighty-one. This means that, when joined by the Tavern Heroes, a total of eighty-nine European players will fight for a ticket to the Bahamas through a Swiss into Single Elimination format.

So not only did Europe set a higher bar for its players; more players than in any other region were able to reach that bar. But where does Europe's strength come from within the region? Let's take a look at how many players per country have qualified for the Winter Playoffs, and which forces drive those countries. 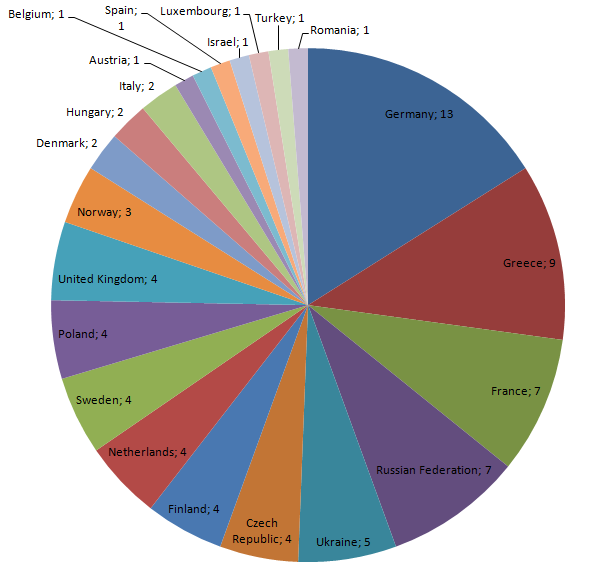 The immediate eye-catcher is Germany. Sending a whopping thirteen players to the Playoffs - as many as the 10 least-represented countries in the graph combined - Germany statistically has the best odds of sending at least one representative to the Bahamas. Though it is not just the large amount of players that gives Germany high odds of having at least one representative; the list of Germans holds some incredibly fearsome names. In the top 10 of points earners three Germans are found: Kycoo, Sintolol and Viper all have collected an incredible 32 points - twice the amount required to qualify. As if that isn't scary enough Lifecoach, SuperJJ and Bunnyhoppor are amongst the strongest German competitors and yes, they're in the race too.

As good as the Germans look on paper, to think they will sail to victory smoothly would be a grievous error. Greece kicks in as a country that has mainly stayed below the surface last year, but still has nine players qualified. France, having it's own, somewhat secluded community, sends seven players into the battlefield. Amongst them is Summer Championships semi-finalist Dizdemon and DreamHack Winter semi-finalist Un33d. In Russia and Ukraine world champion Pavel and runner-up DrHippi respectively lead their packs and are the prime players from the CIS countries.

Some less-established countries positively surprise in terms of player numbers. Though its top point-earners, Creapz and Janetzky, have 'only' 17 points each, in total four Finns are in the running. The Netherlands are another surprise, having four participants. The Dutch have always been represented by ThijsNL, but not too many others have taken as high of a stage as he. And, as some might find surprising, it is actually Tyler who is the highest ranked Dutchman, having 34 points compared to ThijsNL's 25. He would even be Europe's #1 point earner if Pavel and DrHippi wouldn't have carried over points from their previous HCT accomplishments.

However, definitely not all European countries have everything going their way. Surprising in a more negative way is the absence of Spanish players: only one qualified. AKAWonder, Spain's most established and famous player, is found low on the list with only 7 points. Further down below him is DreamHack Valencia 2016's winner Evangelion, also failing to make the cut-off. All Spanish hopes rest on the shoulders of Duck, the lone Spaniard.

Somewhat new ground for Blizzard are the Hearthstone Global Games. In a way similar to the Olympics, the HGG lets countries battle it out in a recently specified team format. Each country will be represented by four players: its top HCT points-earner over a certain period plus three voted-in players. Much like for the Overwatch World Cup 2016, the community dictates which three players will take the stage alongside the qualified player. The nominees are based on their currently acquired competitive points, previous competitive results and their position in the community.

To visualize which countries in the European region look promising, the graph below shows how many HCT points the eighty-one Winter Playoffs players have gathered for their counties. 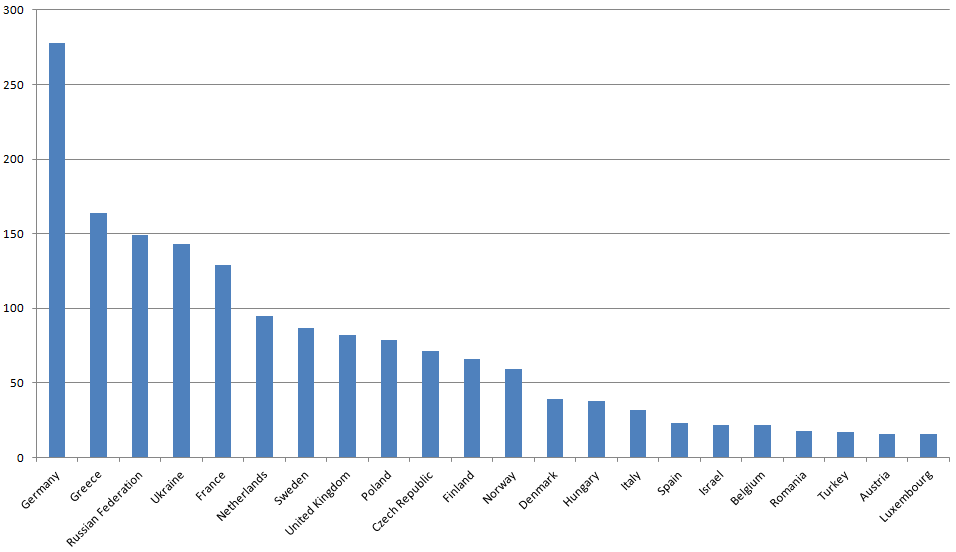 Unsurprisingly, we find Germany at the top again. German efficiency has rewarded them with a total of 278 points, putting them miles ahead of runner-up Greece. With the three earlier mentioned players earning 32 points however, the question will be which German is invited by Blizzard. The rules state that Blizzard will reach out to the highest ranked player from a country, but state nothing regarding a tie in points. Finns Creapz and Janetzky, each with 17 points, and Italians Iniven and Pool8, each with 16 points, find themselves in a similar position as the Germans.

Regardless of who will automatically qualify, the Germans also have plenty of strong players to be voted-in. SuperJJ, Lifecoach and Bunnyhoppor were all mentioned before, but what about 2016's most consistent player Xixo, or uprising talent and Spring semi-finalist Casie? When looking at Europe, Germany seems to be its most powerful engine at the moment.

Should all other European countries save themselves some time and throw in the towel beforehand, then? Most certainly not. Besides the fact that 'anything can happen in a game of Hearthstone', most of the eligible European countries have well-known players automatically qualified or players who are very likely to be up for voting.

Alongside the current world champion Russia might bring its most famous streamer and popular competitor, SilverName, in addition to famous ladder player ShtanUdachi. Ukraine, led by DrHippi will look to all-time god Kolento and Neirea for reinforcements, forming a strong contestant to be the best CIS team.

From the north the Swedish squad brings Powder as their qualified player. "Good for him, but who will join him?", you ask? What about 2015 world champion Ostkaka? Current GosuRanks #1 player Orange can wreak havoc on any country as long as he's in the zone (in which he has been a lot lately), and veteran players SjoW and Freakeh wouldn't mind adding the HGG to their resumes. Ultimately, if he gets selected and it is really up to the community, it would even be possible to see Forsen on Blizzard's big stage.

The players in the table below are per country the 25 highest point-earning players, with their points in bold. The players' names link to their Twitter profile, so if there's someone representing your country you aren't following yet, be sure to do so!