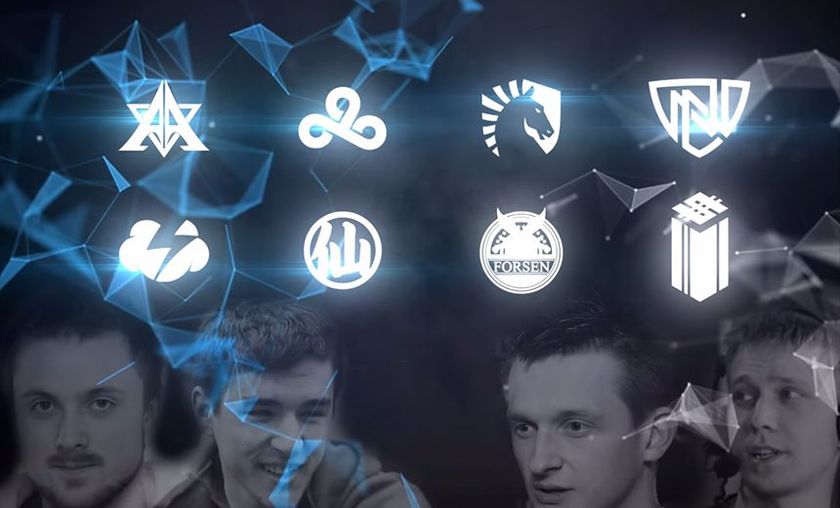 The stats of ATLC: An in-depth analysis

Bane of the ATLC: Rexxar (kudos to Alleria, too)

At this point, the Archon Team League Championship is almost over. Team Celestial was eliminated first, followed by Liquid in the Redemption matches and Archon and Forsenboys in the Satellite stage. We have Cloud 9, Value Town, Tempo Storm and Nihilum left to fight for the title alongside the massive prize pool of 250,000$. Said finals are coming September 11-13 to the Archon Team House in Texas and I'm really looking forward to them.

However, let's look back at ATLC's regular season one last time. It was the first time since the ESGN Fight Nights - so more than a year ago - that a true, ongoing, big-stage team event happened and unsurprisingly it developed a dynamic a lot different from usual Hearthstone tournaments. With lots of different classes and archetypes being brought to the tournament, I've gone back and gathered a ton of stats to analyze.

Note: Some stats on ATLC's official page are calculated wrong. For the purpose of this article, I've gone back and re-calculated all relevant numbers in order to display them correctly.

During discussions about the ATLC format and its relation to class line-ups, pro players and casters often pointed out that bringing certain staple classes and filling the rest of the line-up with weaker "off-classes" is the standard way to approach a match. The general agreement seemed to be that you want to bring Warrior, Warlock and Hunter all the time and probably Rogue and Mage as well. This would leave you with the choice of picking one class out of Paladin, Priest, Shaman and Druid for your "off-class". So much for the theory and general consensus, but did this also turn out to be reality? In short - yes, almost.

One thing is certainly true: The teams brought Warrior all the time, with no exception whatsoever. Hunter and Warlock were brought 54 out of 56 possible times. Mage ranked fourth among the most picked classes with 49, while Rogue ended up fifth, being picked 38 times. This was the core quintet of classes.

If we take a look at the graph below, it becomes noticeable which class the teams preferred as their respective off-class. 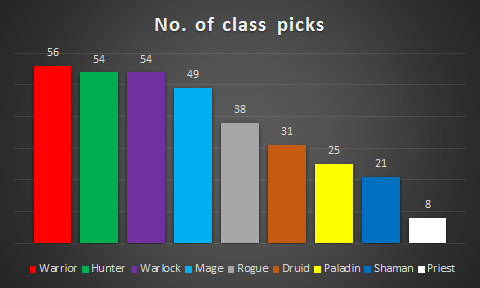 As you can see, Druid received some love with Paladin and Shaman coming in behind. Priest is barely worth mentioning, being picked only 8 out of 56 times.

Let's take a look at some curiosities I've stumbled upon while gathering this data:

Edit: Like Warlock, Hunter was ignored twice. Both teams (Nihilum and Celestial) lost their respective matches without the class.

Druid (40%): In hindsight, a lot of teams in ATLC probably wished they wouldn't have chosen the class as often as they did. In Fast Druid there was only one archetype with very little possible variation in it and the deck ended up having the second lowest winrate (39%) of all decks that were represented regularly. Only Mech Shaman's winrate ended up worse. Some of the builds seen during the group stages teched in [card]Ancient of War[/card]s, but all of them relied on the [card]Force of Nature[/card]/[card]Savage Roar[/card] combo, so they weren't exactly Ramp Druids. Tiddler actually brought Token Druid once but never fell back to the build once he got his win right away.

Hunter (60%): "Nerf Patron Warrior"? Considering ATLC alone, it should be Hunter that deserves a nerf, again. It's a) sometimes hard to identify which archetype exactly a Hunter is playing and therefore difficult to choose the perfect approach and b) two of the three iterations have outright ridiculous winrates. Face Hunter ended up with having only a 41%-winrate, but Midrange (65%) and Hybrid Hunter (69%!!!) turned out to be by far the strongest builds in the league. Enough to carry Rexxar and Alleria to the top winrate among all classes by quite a margin.

Mage (46%): Together with Warlock, Mage certainly ended up being the most diverse class in the league. Freeze Mage was played the vast majority of times and ended up with a 48%-winrate, but Tempo Mage (29%, though only played in seven games) and Mech Mage (55%) also got some attention. Neirea even brought a Control Mage, but lost both games he played it in.

Paladin (46%): Midrange Paladin and Aggro Paladin saw more or less equal amount of play. Interestingly enough, most players lost with the class pretty much all the time and only two of them carried the class to its decent winrate: Chakki, who went 5-1 with the aggro variant, and StrifeCro who scored 6-1 with the midrange version. Midrange Paladin ended up having the better winrate compared to Aggro Paladin with 50% vs. 43%.

Priest (46%): Priest is played so little that I don't even know if there's something like a "standard build" for the class anymore. The archetype mostly seen in ATLC was the so-called Chinese Priest, however, running [card]Deathlord[/card]s, [card]Velen's Chosen[/card] and [card]Lightbomb[/card]s. With his 46%-winrate Anduin probably did better than most people expected, but 13 games in total is not exactly a crazy amount of data.

Rogue (53%): Again, one of the classes with only one real archetype. Granted, the players sometimes teched in [card]Assassin's Blade[/card] or [card]Goblin Auto-Barber[/card]s, but in the end they were all very oily. Valeera still ended up netting the third highest winrate of the tournament, so maybe the class was in a pretty good position prior to TGT? Open for discussion, I guess.

Shaman (40%): See: Druid. There's only one real archetype, the Mech version, though you can build it very fast or very control-y, depending on if the curve ends at five, eight or somewhere in between. The Mech Shaman also has a poor winrate of 38%. Interestingly enough, as was the case with Druid, there was one player of Team Celestial who brought a different build one time and directly got a win with it - SilentStorm. Thanks to him, Thrall isn't the worst hero on his own but instead tied with Malfurion. Hooray.

Warlock (54%): The Zoo variant with Voidcallers was the most played archetype of the class by far, ending up with a winrate of 51%. Handlock was played a lot less - 18 games compared to 51 - but netted the higher winrate with 60%. Variants that also saw play were Malylock (75% winrate though only played in four matches) and Demon Handlock, featuring [card]Voidcaller[/card]s instead of or alongside [card]Mountain Giant[/card]s and [card]Twilight Drake[/card]s (50%). All in all, the most winning class behind Hunter.

Warrior (51%): To be honest, Patron Warrior seems to be in a fine spot regarding stats of ATLC alone. The archetype was played pretty much all the time. It saw play in 90 games, the most played deck by a mile, and ended up with a winrate of 52%. Control Warrior becomes more and more of the little brother in every regard, being played in 13 games and netting a winrate of 46%.

Warrior ended up as the fourth most winning class. Certainly good, but not looking too impressive. On the other hand, the meta evolved around Patron Warrior, so maybe a 50%-ish winrate is exactly what should be expected. 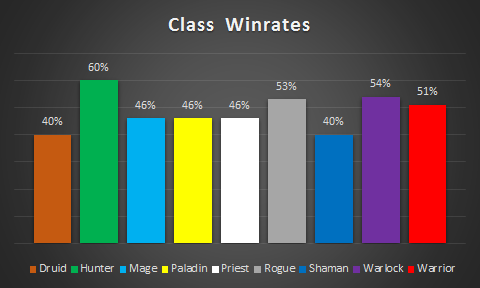 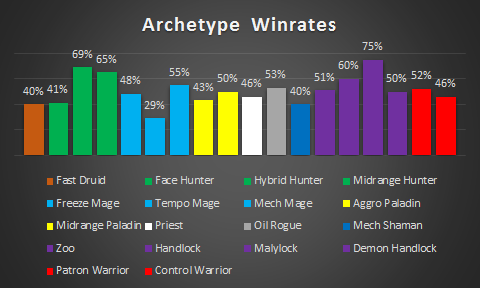 I'm using the word "carry" as a MOBA-term here, as in "the people who carried their respective teams to victory". There are four players in the league whose winrates clearly sit above those of the competition and I'll point out what was special regarding their performances.

Brian Kibler (13-4, 76%): Kibler came into the league as one of its biggest wildcards, but quickly became the favorite to win the "Master of Duels" award after staying undefeated for the first four weeks. It's easy to talk this performance down as Kibler played Hybrid Hunter every single week, a deck that seems to be the strongest among the field as of yet, but on the other hand not everyone (no one, in fact) went 7-1 with Hunter. On top of Hunter, he played Druid, Shaman and Priest, probably the three weakest classes overall. He managed to win his single Priest game and also carried Mech Shaman to a 4-1 record. Don't even think about what these classes' winrates would've been without him.

Keaton "Chakki" Gill (12-5, 71%): Although Chakki is primarily known for his love of aggro decks, he also played Priest in ATLC. Apart from his 1-2 performance with Anduin, Chakki went 5-1 with Aggro Paladin, which is a lot better than all the other Aggro Paladin players. Without him, the deck would have a 24%-winrate instead of one of 43%. Of course, he was also playing Hunter and ended up 6-2 overall with the class, playing all different iterations but mostly hybrid.

George "Hyped" Maganzini (11-6, 65%): Yes, yet another American. Hyped is actually the only player among the top four who didn't play Hunter even once. Instead, he proved that he's still one of the best Rogue players in the world and had a 66%-winrate with Valeera. Only SilentStorm (100%, one game played) and Neirea (75%, four games played) are better in that regard.

Hyped also ended up 2-1 with Control Warrior, 3-2 with Patron Warrior and won the single Druid game he played. Most of the time, Eloise was the team's Mage player, but Hyped also brought the class once - only to not play his signature Freeze Mage but Mech Mage instead. What I call the "big bamboozle" netted him a 1-1 record.

Jan "Ekop" Palys (14-8, 64%): The best player in the league who seemingly no one talked about possibly winning Master of Duels. Also the only player in the league to get his two wins every single week. Most teams switched up the type of Warlock deck they were bringing but Ekop and Cloud 9 being somewhat of an exception. He played Zoo in six weeks and to a final score of 6-3. He also played all versions of Hunter, mostly the slower ones, to get a combined score of 7-4 with the class. His last win he got with Patron Warrior, losing one game and then winning the next.

4. Some more stats for goodbye

To close this analysis, some random stats I've picked up along the way. Some of them weird, some outright insane:

So, that's my take on the important stats of ATLC's regular season. If you are curious about other stats I might have gathered, just leave a comment below or holla at me on Twitter.