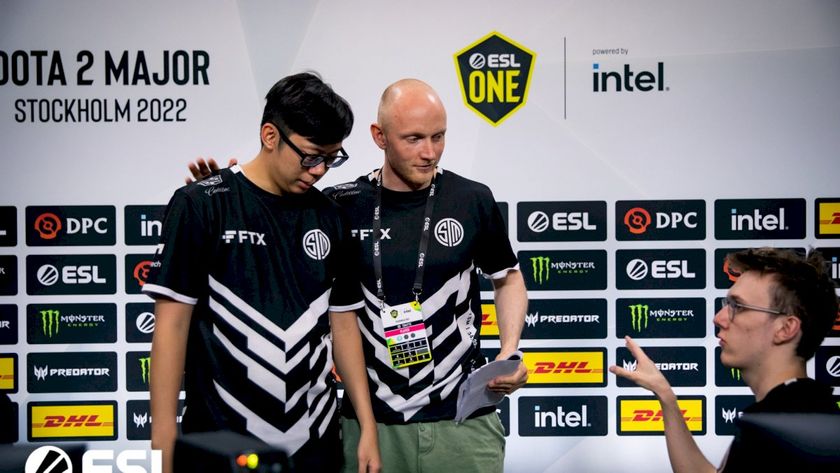 TSM FTX beat OG 2-0 while Gaimin Gladiators defeated T1 with the same score line to secure a place in the top 6 of the ESL One Stockholm Major.

The ESL One Stockholm Major is churning out a few fairy tales for teams that haven’t had a lot of experience on the big stage, and TSM FTX and Gaimin Gladiators are two of the teams who are on the right side of that fairy tale. This is the first DPC Major for both teams (and very first Valve Major for a lot of the players) and they have managed to put up a stellar performance to make it to the top 6 by winning their first series of the upper bracket. TSM FTX took down OG, who themselves have a young roster, while Gaimin Gladiators managed to make short work of T1, who do have some experience at big tournaments. Both series ended with a score line of 2-0, but while TSM had to fight for their win, it was a stroll in the park for Gaimin Gladiators.

With Evil Geniuses eliminated from the Stockholm Major in the group stages, the burden of carrying the flag for North America has fallen on the shoulders of TSM FTX, and they have accepted the responsibility. TSM put out two strong performances against OG that propelled them into the semifinals of the upper bracket. Game 1 was a close, back and forth game that lasted nearly an hour. Till the 45th minute, the experience and net worth were quite close and the win probability was dead even! TSM held their nerve and came out ahead in the clutch moments to gain the advantage as the game progressed. TSM’s captain, David “MoonMeander” Tan’s position 4 Mirana got significantly more farm than a typical position 4 hero, and eventually scaled into a fourth core for the North American outfit. Mirana ended up being one of the most farmed heroes in the game with insanely high damage numbers, which was a major differentiating factor between the teams. 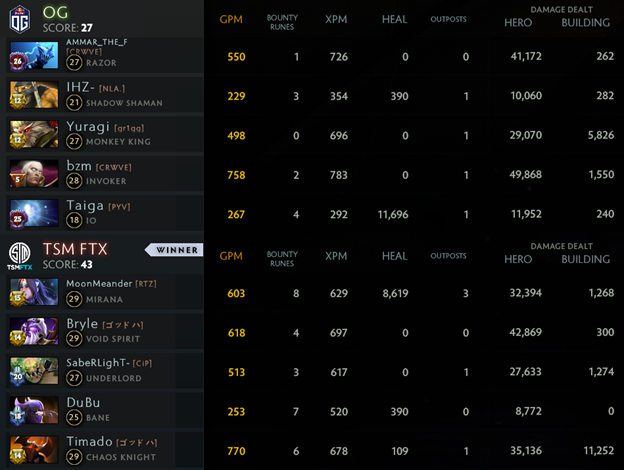 OG’s coach and two time TI winner Johan “N0tail” Sundstein praised Moon’s Mirana display, saying it was the best Mirana performance he had ever seen. Hopefully, this gives a bit of momentum to the prospect of core Mirana.

Game 2 was a lot more straightforward than game 1. OG picked Earthshaker, a hero that is not in the meta and hadn’t been picked in the tournament up to that point. TSM also had a surprise pick in Silencer, but that was to counter OG’s Bane. Every time Fiend’s Grip was used, Global Silence would nullify it, and Bane was just not allowed to do Bane things. Moon was pumped up after the win!

The final series of the first day of playoffs, Gaimin Gladiators vs T1, was the least exciting one. The two games combined didn’t even get to one hour of play. Gaimin Gladiators swept their SEA opponents off the map. In game 1, GG used the forgotten Tiny-Lycan strat from TI10. In game 2, they turned to the zoo tactics with Beastmaster and Enchantress to finish the game in a little under 22 minutes.

The four victors from the first round of the upper bracket get to rest for a day before they are back in action on the 18th of May. When the upper bracket resumes, Tundra Esports will take on Thunder Predator while TSM FTX will go head to head with Gaimin Gladiators in a bid to make it to the upper bracket final and secure a place in the top 3 of the ESL One Stockholm Major.

headline picture courtesy of ESL ONE

Do you expect either TSM FTX or Gaimin Gladiators to win the ESL One Stockholm Major?