Three weeks ago, J.Storm made their second roster change in less than a month, moving Park 'March' Tae-won and Jonathan 'Bryle' De Guia to inactive status while coach and retired veteran player Jimmy 'Demon' Ho moved to active status and Leon "Nine" Kirilin from Germany who last played for Team Secret was recruited on a trial basis.

Now, just weeks before the TI9 qualifiers, Demon has returned to coach status and Canadian veteran Sivatheeban "1437" Sivanathapillai returns to North America after a lengthy stint in SEA. 1437 was last playing for Tigers, a team who despite having some hard hitter and heavy names such as Chai "Mushi" Yee Fung and Danil 'Dendi' Ishutin playing alongside 1437, seemed to have trouble finding any notable achievements of success.

It seems that 76% of our readers were correct three weeks ago when we asked about the final form of the team. 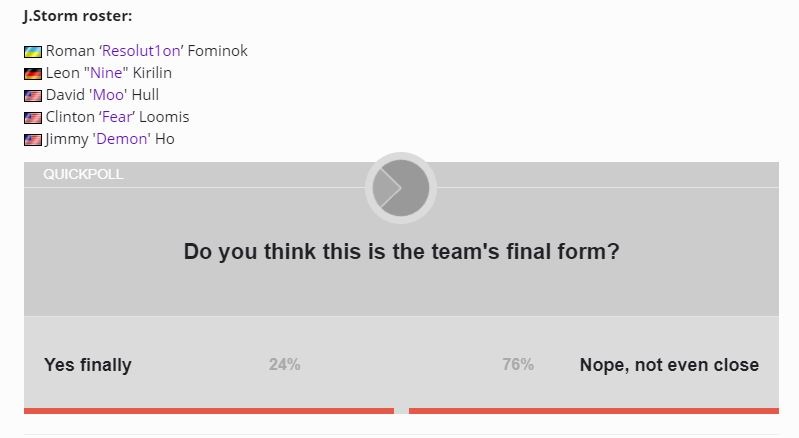 The new roster will be aiming to claim a spot at TI9 through the NA regional qualifiers - a region that is expected to become highly competitive for what could end up being only one slot. The International 9 open qualifiers are scheduled to begin on July 3rd, followed by the closed qualifiers on July 8th.

Will this final roster see the TI9 stage?