DK one step closer to G-1

DK stepped up a level from the groupstages as they managed to beat LGD.int in straight games. DK will be facing Zenith tomorrow to conclude the G-1 League Asia qualifiers as they battle it out to grab the final spot in the final event.

DK against all odds took down LGD.Int, the 60% favourite going into the game. Coming fresh off their sloppy performance in the phase three groupstage, DK bounced back in spectacular fashion in game one followed by outdrafting LGD.Int in the second.

DK will be facing Zenith tomorrow in a best-of-three to determine who will be receiving the G-1 League offline event spot. The match is set to begin at 13:30 CEST.

Unfortunately for LGD.Int, their road to G-1 League has ended and they will be training and bootcamping their way for the next big event in China. 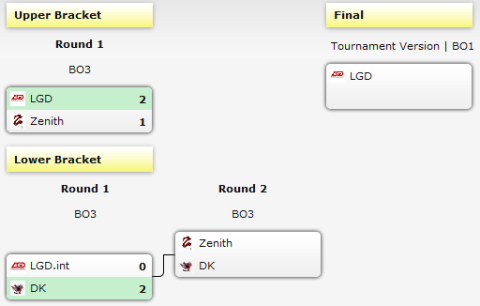 The game started with DK taking first blood on puck with a strong aggressive tri-lane. Within less than a minute ROTK's safe lane Queen of Pain died to LGD.int's Leshrac, Chen and Lycan as ROTK did not learn blink as his first spell. LGD.int continued their aggression by pushing down DK's top tier one tower. Burning's Alchemist did not take the farming approach to the game as he participated in all their early fights, furthermore Burning maxed Acid spray rather than Grievel's Greed to help with the anti-push against LGD.int's strong pushing potentials.

The early game looked strongly in LGD's favour. Lycan level nine completely dominated ROTK's level five Queen of Pain, sending Rotk back to base as soon as he teleported out. In the middle lane, Lone Druid free farmed with the highest creep stats. By the 13th minute, LGD.int had already taken all DK's tier one towers and an Aegis by the 21st minute mark. With the Aegis, LGD.int persisted in pushing but DK defended bravely.

DK managed to defend another dangerous push as their middle barracks were bare. LGD.int with another Aegis on Lycan decided to push once again, however their push got miraculously stalled upon by DK's strong resistance.

The match deciding fight occurred in the Roshan pit. Despite LGD.int taking the third Aegis, Burning demonstrated supreme farming and carrying prowess on Alchemist as Burning annihilated the entire LGD.int's back line. After winning the team fight, DK went for the GG push, killing both Lone Druid and Lycan in the process. LGD.int soon calls the GG 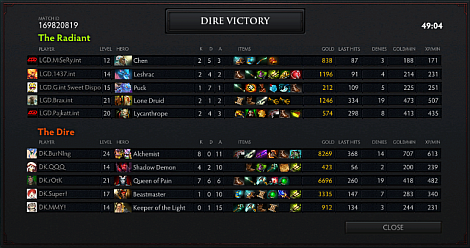 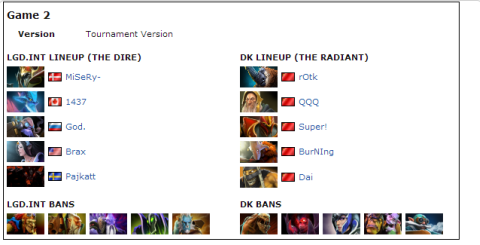 Game two both teams picked up unusual line-ups, with LGD.int picking up the gank oriented heroes such as Mirana, Leshrac and Nyx whereas DK opted for the strong five men push and team fight strategy. DK got off to a good start with ROTK taking first blood with Dragon Knight in killing Shadow Fiend despite ROTK missing all his spells on Magnus.

Unlike game one, DK took the initiative in taking early towers. Demolishing all LGD.int tier one towers by the 13th minute. Due to the early game disadvantage from LGD.int, LGD.int decided to split push all three lanes. The split pushing of both Tinker and Shadow Fiend enabled the two cores to farm up important items.

LGD.int smoked up and successfully took Roshan, however DK was prepared. They killed both Nyx and Mirana. By the 36th minute, DK took down the middle barracks without any contest as LGD.int could not fight five versus three with both Mirana and Nyx dead. Five minutes later, DK took easy top barracks as both Shadow Fiend and Nyx did not have teleport scrolls to teleport back to defend base. Straight after taking the second set of barracks, DK managed to team wipe LGD.int. LGD.int calls a 45 minutes GG. 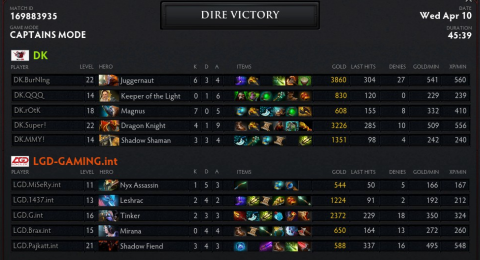