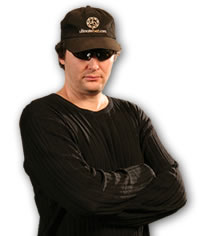 Phil Hellmuth is the all time World Series of Poker bracelet winner, holding eleven. He has more in the money finishes, 79, and final table appearance, 42, than any other player. He won the WSOP Main Event in 1989 at the age of 24. He has won over $11.3 million in live tournaments and is a member of the Poker Hall of Fame. He is widely known as the "poker brat" due to his temperamental personality and propensity to speak quite negatively of his opponents when steamed. Hellmuth has authored numerous books, including Play Poker like the Pros, Bad Beats and Lucky Draws, The Greatest Poker Hands ever Played, Poker Brat and Deal Me In. Hellmuth was born July 16, 1964, raised in Madison, Wisconsin, and has lived in Palo Alto, California for most of his adult life. He is married with two sons.

Phil Hellmuth is probably most known for his famous quotes:
Perhaps better than any other poker player, Phil Hellmuth has marketed himself and his theatrical "poker brat" persona to tremendous notoriety. Away from the poker table, he can be a devoted family man, down to earth, charitable and centered, but at the poker table or when he's suffering a perceived beat, he vents unlike any other notable player. His tournament poker ego is second to no ones. It seems to drive him to greater heights at large amateur filled events like the WSOP, although his results online and at high stakes cash game have been uneven when playing against top cash game specialists.