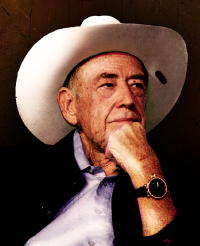 Doyle Brunson is the biggest living legend in the poker world. Born August 10th, 1933 in Longworth, Texas, Brunson has been playing poker professionally for over 50 years. He is the first two-time WSOP main event champion, having won in consecutive years 1976-77. He has won 10 WSOP bracelets and was the first player to earn $1 million in poker tournaments. He also won a WPT title. He is the author of the revolutionary poker books, Super/System and Super/System 2. He is a Poker Hall of Fame inductee and generally considered the most influential player in the world of poker.

Doyle Brunson keeps a very active playing and promotional schedule even as he approaches 80. He continue to play in many televised poker shows like High Stakes Poker where he had an incredible record of something like 17 winning sessions in a row. He continues to play the biggest cash games in Bobby's Room at the Bellagio. He is a very affable character beloved by the poker community for being a pioneer before poker joined the mainstream. His competitive spirit remains strong as represented by one of his favorite sayings "A man with money is no match against a man on a mission."

One of the biggest pots ever on High Stakes Poker