We have already seen two whole weeks of EU and NA play but that was on an old patch. Here are my thoughts on what Korea will bring to the table this weekend.

It's no secret that the meta has been in a flux state for some time now.

Vul'jin, Ragnaros, and Valeera have each been released in surprising competitive form and, as teams experiment with them, Blizzard simultaneously made sweeping changes to the competitive mainstay Tassadar. Then, just when you think you have a handle on things, the armor mechanic comes around and drastically buffs historically top-tier heroes like Anub'arak, Uther, Arthas and Greymane, breathing new life in the "old meta" Heroes.

It's also around this time that people start pushing Medivh to his limits and reveal him for the playmaking, game swinging hero he is. We even saw Cho'Gall last week!

Bakery from Dignitas summed it up best with the spiciest of HGC memes: 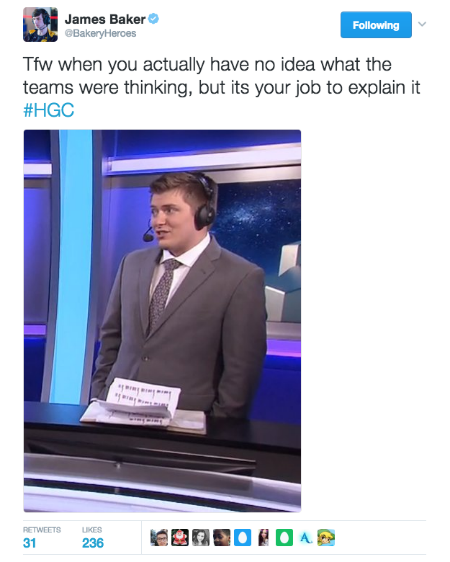 This Friday, the Korean HGC Pro division starts with L5 (formerly know as Ballistix) playing against Supreme Mixtape. Supreme Mixtape qualified for the HGC through Korea's open division and are suddenly just days away from playing the World Champions on a new patch (see above). They may have reason to be nervous, but the rest of us can't wait to see it unfold.

What strategies with L5 reveal? What are the first ban and first pick heroes of the Korean pro league? Will anyone play Valeera? All these questions and more will be answered this weekend.

Until then, here are my predictions of what we should expect from Korea with regard to their hero picks and ban priority:

One of the biggest differences between eastern Heroes towards the end of the year was their experimentation of Varian and his lockdown capabilities with Taunt. Now that Varian has been buffed and Taunt is even better, I don't expect to see any hesitation on Korean teams drafting Varian as a viable solo warrior to pair alongside a Bruiser.

2. Leoric will be a standard pick.

In a similar case with Varian, Korean teams have embraced Leoric as a viable pick with more frequency than any other region. It's not just their like of the hero, but it's the style in which they play Leoric as well.

If a Korean team draft Leoric, play close attention to the talents. The level 7 talent "Lingering Apperation" (Wraith Walk lasts 80%longer) is ignored in the west, but Korean players use this in combination with Hardened Bones to control space and tank absurd amounts of damage. In the middle of a team fight, Leoric will Wraith Walk and posture around the fight, threatening to appear any number of places while simultaneously drawing damage away from his team.

3. Higher priority on Jaina than any other region.

Jaina is a hero that scales with player skill-- the better the player the more value Jaina brings to a draft. This can be said of all heroes but is seen most sharply with Jaina. While Tychus, Valla and Valla remain the premiere ranged assassins in the game, Korean teams won't ignore Jaina. They simply can't afford to.

Why you may ask? Because...

Korea will play more Zeratul and ban Zeratul more than any other region. We saw it all throughout 2016 and nothing in the new patches has made Zeratul any worst of a pick. The Jaina + Zeratul heroic combo is a very real thing and is a crucial part of the rock-paper-scissor draft tension between Korean teams:

Rock is Tyrael and negates Ring of Frost with Sanctification.

Paper is Zeratul and negates Sanctification with Void Prison.

Only in many cases you can just draft Zeratul and Jaina together and gain a huge wombo-combo (that can punish heroes clumped around Sanctification) while also denying your opponents one of Zeratul's toughest matchups. All of this is avoided though if you just ban Zeratul or pick him first, which I predict will happen frequently.

Despite the nerfs, Ragnaros continues to be one of the most effective Heroes in the game. This coupled with the value Korea places on strong solo laners and Heroes who can clear the Infernal Shrines all by themselves make tons of Ragnaros play an easy prediction.

Also, Sulfuras Smash is just a souped-up version of Lunar Flare. Like Lunar Flare, it's best used in "no-miss" situations, like when followed up after Diablo's Overpower or Dehaka's drag. During the NA HGC games, we see a fair bit of solo Sulfuras Smashes that don't exactly hit the mark, but this won't be the case from Korea.

If there was ever a region with the mechanical skills needed to always land the follow up it's Korea.

Arthas makes a resurgence; the original Korean darling returns to his rightful place thanks to physical Armor buff.

Abathur and Valeera on Towers of Doom -- you heard it here first!

How do you think the Meta might change with the advent of the Korean HGC? Let us know in the comments section or send us a tweet @GosuGamershots

Will Korean teams experiment with the new patch or stick to last patches picks?