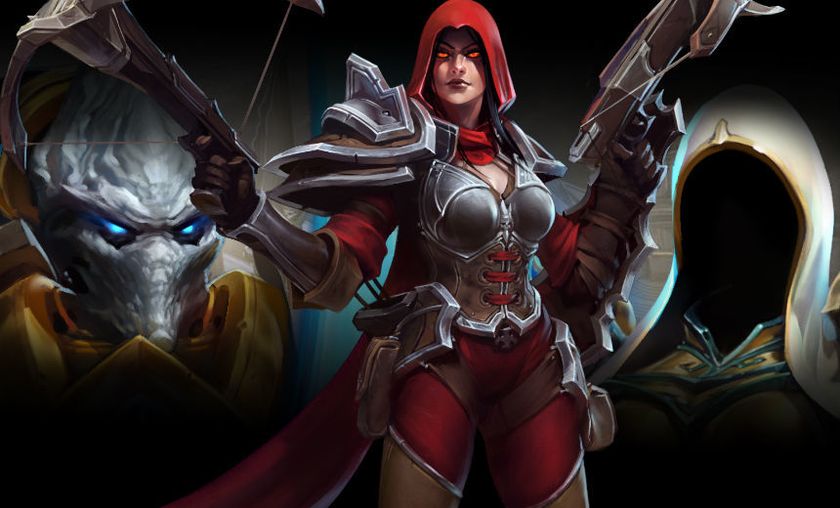 Valla, Auriel Tassadar is a tried and true trio that isn't going anywhere anytime soon. Its sustained damage potential is unmatched, as well as it's survivability and raw healing

Valla and Auriel as a combo are very powerful. Add in Tassasdar and the trio becomes invincible. These three heroes can take on five!

Chances are you have either watched or faced Valla, Auriel, and Tassadar before and seen how potent their synergy is. For those of you in the dark, here are the essentials:

This trio has seen tons of play over the last year and week three of the HGC shows this trio making a comeback.

The draft phase and Tassadar

One of the most difficult parts when confronting a team looking to secure this trio is Tassadar during the draft phase. Since his rework, he somehow managed to grow stronger and his influence on the competitive meta is at an all time high. This means that the first bans and picks almost always involve Tassadar in some way. He can fit in any composition and his flexibility is easy to make use of.

This means the moment enemy team acquires Tassadar, it becomes difficult to avoid facing highly synergistic strategies. You can't deny the opponent from securing either Valla, Tracer or Vul'Jin, and each of these duos is wickedly powerful. Auriel becomes another free pick, because spending an entire ban or picking her sabotages your draft more than it hurts the Tassadar team. The moment you "overreact" and attempt the hard lock on Valla / Auriel, the enemy team can shrug it off and continue drafting top-tier heroes like Diablo, Ragnaros, and Falstad freely.

In short, the trio can be easily assembled with no risk if you end up just playing with a solo Valla or Tassadar.

All in on Valla

Before trying this trio out yourself, find a confident Valla player and don't let go. It is vital for this strategy that Valla understands that she can win virtually any trade when supported by Tassadar and Auriel and her positioning must be more forward and aggressive than standard Valla play would call for.

Valla must trust in Auriel's timely Crystal Aegis and burn down opposing threats instead of running from them. Auriel's healing prowess is reliant on a consistent flow of damage and is the primary synergy that makes this trio so efficient.

In this clip from the embedded match above (starts at 14:25), you can see CrazyMoving's aggressive Valla position and how important it is to the team composition. Valla goes toe-to-toe with an enemy E.T.C and shows no fear of death. Instead, he peppers the enemy team with damage constantly, fueling his Auriel support with tons of Hope.

While it is always preferred to choose your talents dynamically as to better prepare yourself for the enemy and battleground, here are some of the crucial talents that should always be considered when playing this trio:

When at 10 stacks of Hatred, the Movement Speed bonus increases to 20% total and you gain 4 Mana per second.

Hot Pursuit is a non-negotiable talent when paired with Auriel. The movement speed allows Valla to play aggressively (which remember, Auriel needs) and the 4 mana per second allows Valla to spam Multi-Shot more frequently and play to the trio's sustained damage strength.

Each stack of Hatred increases the damage of Multishot by 4%.

Because you are looking to fill Auriel's hope up quickly and can expect Tassadar's shields to allow continuous auto attacking, it is easy to get full value out of the extra Multishot damage Punishment provides.

Multishot also fires 3 grenades, which deal 263 (125 + 4% per level) damage. Each enemy Hero hit by a grenade reduces the cooldown of Multishot by 2 seconds.

Arsenal further enhances Valla's Multishot strength and, once again, provides Auriel with more opportunities to receive tons of hope. Valla will be wanting to hit as many targets as possible and Arsenal rewards that.

Khaydarin Resonance is a vital talent for Tassadar's support efforts and also provides much-needed mana regeneration. This talent synergizes so well with further Plasma Shield talents it should almost always be considered when Tassadar is selected primarily for his support abilities.

Upon expiration or breaking, the target of Plasma Shield gains 25 Armor for 3 seconds, causing them to take 25% less damage.

This talent is everything any support hero ever wants. Combined with Khaydarin Resonance, Tassadar can ensure that multiple allies get precious damage mitigation exactly when they need it-- when their shield has broken.

Quest: Each Takedown earned lowers the cooldown of Oracle by 3 seconds, to a maximum of 15 seconds.
Reward: Upon getting 5 Takedowns, the sight range of Oracle is increased by 50%.

This trio doesn't have hard engages and relies on superior positioning and slowly bullying their way towards a map objective. Vision becomes even more important for this team, and because Tassadar will be hanging out with Valla for the majority of the game, scoring 5 takedowns shouldn't be difficult.

Place an allied Hero into Stasis for 2 seconds. Upon expiration, Crystal Aegis deals 592 (281 + 4% per level) damage to all nearby enemies.

Crystal Aegis is already the defacto heroic pick for Auriel but it is even more important in this style of team composition. Tassadar and Auriel don't have access to Cleanse, so Crystal Aegis is the next best thing. Be careful of using it on an ally and setting them for unavoidable damage.

When Crystal Aegis expires, it grants a shield that reduces damage taken by 50% for 4 seconds.

Diamond Resolve solves the primary weakness of Crystal Aegis, as it ensures the target will likely survive even after being a sitting duck for 2 seconds. This talent is especially powerful when your opponent has successfully been eliminating Valla throughout the game.

The best counter to this line-up is persistent burst damage. Auriel and Tassadar will never lose a grindy team fight with both teams conservatively poking back and forth. This trio wrote the book on that strategy so don't play to their strengths! Instead, your strategy should be based upon securing a composition that can reliably CC a single target for an extended period and safely reset once Crystal Aegis is used.

Despite running two supports, this trio does not have access to cleanse. Recent HGC teams identified this as it's primary weakness and have based their counter strategies around punishing this Valla with stun-lock combos that lead to big burst damage. Taunt Varian mixed with any other stun brings tons of CC while burst damage heroes like Jaina, Li-Ming, and Ragnaros, in particular, are very strong picks.

Check out how Sulfuras Smash can be timed perfectly to punish Crystal Aegis. It requires some practice, but it allows Ragnaros to single-handedly counter one of Auriel's most powerful abilities

In this clip from the embedded match above, we see just how effective Varian can be at setting up the kill against Valla. Even though Valla was at full HP and shielded by Tassadar, it can't stand up to chain stuns and the damage that follows. Varian is so effective at this because of the point-and-click nature of Charge-- it can't miss and ensures heroes like Dehaka can follow up with a stun.

Like our last trio, part of the inherent power of this strategy is the top-tier heroes it makes use of. With proper talents and a team-wide understanding of the compositions win condition, these top tier heroes can synergize together and become something especially effective.  Valla must understand that her role demands a more aggressive approach that especially takes advantage of the compositions siege power and ability to trade damage with the enemy. A passive Valla will make Auriel and Tassadar much less effective.

The most recent HGC matches (played on the Valeera patch) have proven the success of Tassadars exhaustive rework and Valla remains top tier pick in all regions. It was hard to tell whether or not this strategy (and others like it that take advantage of Tassadar shielding a premiere ranged assassin) would fall out of favor, but that simply isn't the case.

Valla and her security unit are here to stay.

Are you the Valla or one of her supports?

Did Blizzard just tease Rock N' Roll racing for Heroes of the Storm?

Time to study up! HGC Pro League VoDs and drafts available on our searchable database