A lot of things will be changing but, thankfully, all for the better! Here are some of the most important things that will change the way you play Heroes of the Storm.

The improved UI Blizzard recently revealed is part of many upgrades the game has seen over the years, just look at how the stats screen looked during the games early beta: 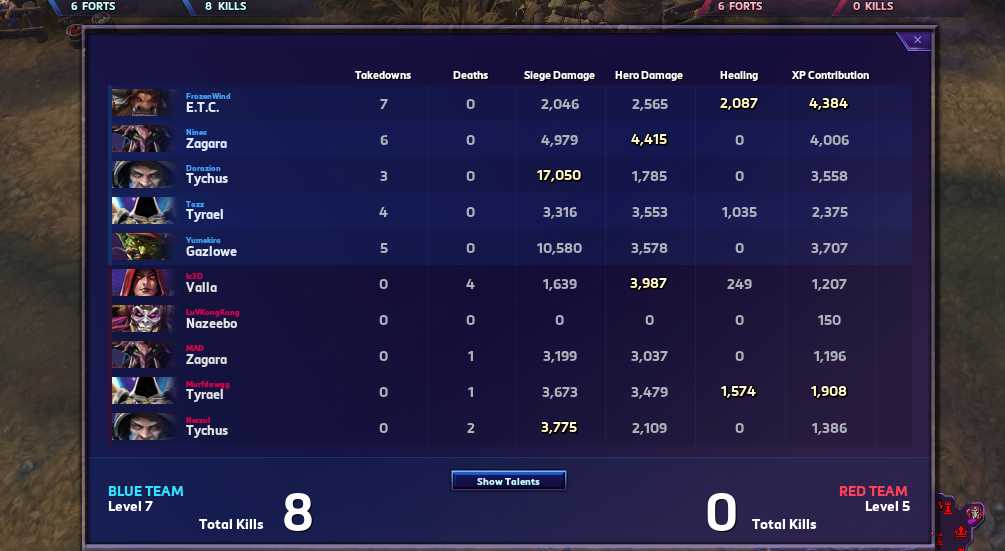 We have come a long away visually (R.I.P Non-support healing stats) and the game has never looked prettier. However, the latest visual update will change the game in more ways that visual sleekness. Killstreaks, improved party frames, and a Killfeed are all features that fundamentally change the way players interpret game data and play Heroes.

It feels good when any game calls out your superior play (D-d-dominating!) and Heroes used to have a system achieving this that was taken out of the game before release to avoid visual clutter. Player names would catch on fire and everyone in the game would see them. It was a cool feature.

Fortunately, Blizzard had a change of heart and the blue flame killstreak is back. The potential visual clutter of the blue flames have been moved to Hero portraits and the stats screen and the result should motivate players to continue playing at their best whenever they catch on fire!

Just ask any Overwatch player-- being on fire is something to be proud of and motivates strong play.

Heroes of the Storm: a game about Heroics being pressed at the same time. Jokes aside, the importance of synchronizing abilities and fighting as team can't be underestimated. The new party frames include a visual indicator that let you know your teammates HP, chosen heroic (and it's cooldown) and a much clearer representation of a death timer.

Rexxar and The Lost Vikings even have specific indicators to show individual hero deaths!

It will be easier than ever for players to identify when they should take a team fight and whether they should wait till their heroics are back. Also, no more debates on whether or not Ancestral Healing was on cooldown or Divine Palm was ready to use-- everyone can see!

3. Killfeed allows team to react from off screen deaths

A KIllfeed doesn't tell you anything you didn't already notice, but it conveys death information quicker and in a more visually pleasing way. It also changes the focus from "an ally died" to "this specific enemy killed this specific"

The biggest change is how players will react to offscreen deaths or deaths that happen in the middle of a team fight. It will help players be quicker to rotations, quicker to retreats, and understanding whether or not a team fight is going in their favor. This change also helps players understand which enemy hero is netting the most kills, an important detail that is usually hidden away in the stats screen.

All in all, these changes are things that most players didn't even realize they wanted. But now that they are on their way, it's hard to imagine Heroes before them..

What is your favorite change?