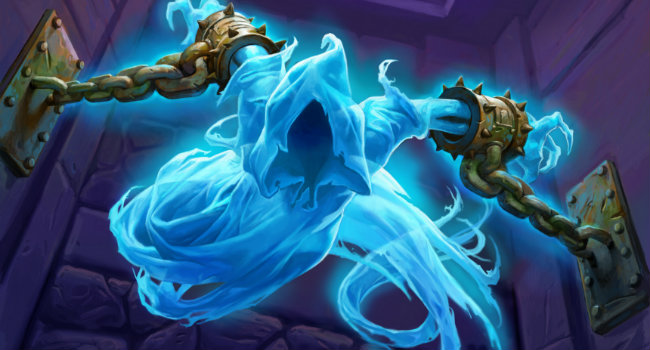 In last week’s column, I wrote about the state of a Hearthstone in the aftermath of Knights of the Frozen Throne. I wrote at length about the dominance of druid in the current standard format – how it happened, and what might be done about it.

I realise now that I was mistaken. I was far too reserved in my criticism.

Last week, I said that we still needed time for the meta to shake out. I wanted to see tournament play before drawing any conclusions. After all, the format was less than a week old at the time. Surely, given enough time, a deck to keep druids in check would come to the fore. Just give the pros a little time and they will figure it out, I reasoned.

The Hearthstone Global Games ended with Czech Republic as the victors, but more importantly, it ended with a druid winning the final game and looking utterly unbeatable in the process.

But here’s the real kicker: druid is not just the best deck in the format. According to metastats, it is number one and number four. Jade Druid, unsurprisingly, is the most successful deck in the current standard format, but aggro druid is also right up there. You can be more specific if you like: each of the top four “Individual Deck List Win-Rate” decks are druid. Every. Single. One.

Druid accounts for nine of the top 15 performing deck lists right now. Last week I mentioned the fact that druid is the most played deck since Undertaker Hunter, but the issue is obviously far worse than that. I normally try to avoid covering the same topic twice in a row, but if I want to write about Hearthstone right now, it only seems appropriate. The format is overrun with druids, so it is only fitting that content should mirror that, right?

I suppose I could take Kripparian’s approach and talk about how good the meta game would be if druid did get a serious nerf, but I actually don’t believe that.

Here’s the thing: this is, in my opinion, the worst state that Hearthstone has ever been in. It’s bad enough that druid is everywhere, crushing everything, but below that are a bunch of decks which are absolutely horrible to play against. Druid is frustrating because it’s everywhere, but have you seen Exodia Mage? Have you played against Highroll Priest? What utter, utter, bullshit. Mill Rogue? Yuck.

I have actually reached the point where I’m just not playing standard any more. It’s simply not fun. Either you play against druid and you feel miserable and helpless or you play against one of the other stupid, stupid decks and feel miserable and helpless. That might sound like hyperbole (because it is), but that is how I honestly feel playing standard now. So many of the tier two decks feel super RNG reliant, more than I'm willing to stomach.

Let’s take Exodia Mage as an example because I played a bit of it before I gave up on the format. Playing the deck, you are navigating through turns of trying to stay alive, managing your hand size while trying to try to generate enough random spells to make your quest go off in a timely fashion. If you don’t draw or generate enough freezes against aggro, you just die. If you have too many cards in hand and burn the wrong card, you just die. Okay, as the pilot of the deck you have some control over that, but on the other side of the board, you are just hoping your opponent doesn’t rip another [card]Ice Block[/card] of [card]Frost Nova[/card] from their [card]Cabalist Tome[/card]. Wow! Isn’t that fun?

Then there’s Highroll Priest. I actually hate this deck more than most of the druid nonsense. Did you draw [card]Barnes[/card] on turn four and have it hit a statue? Congratulations, you probably won on the spot. Awesome.

I really do not like writing articles like this, but I am that disillusioned with standard right now and I don’t think nerfing druid is going to fix it. Sure, it will probably make more decks playable, but most of those decks are absolutely horrible to play against. If I had to look for a light at the end of the tunnel, it’s that the decks freed up by a potential druid nerf are more beatable than druid itself right now. Sure, turn four [card]Obsidian Statue[/card] into resurrected statue is frustrating, but there are tools to deal with that. Druid shored up many of its inherent weaknesses, and that needs to be sorted, but maybe if they do get sorted things will improve. Maybe.

Are you still playing standard?

Knights of the Frozen Throne: first cards and details

Zechs Files: Top 10 cards from Knights of The Frozen Throne