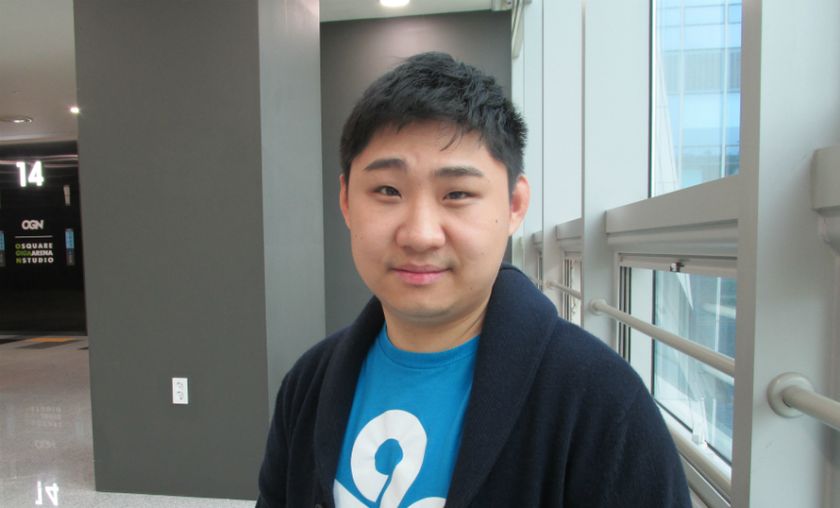 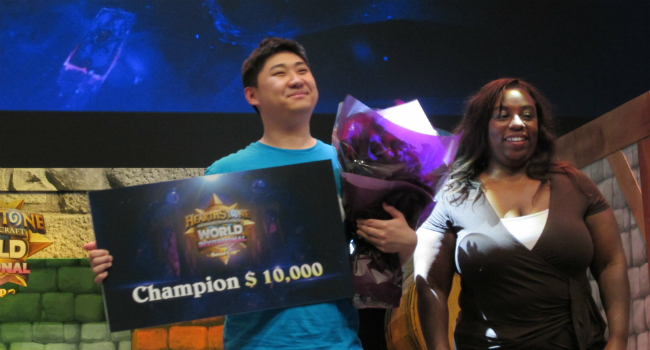 Whispers of the Old Gods released earlier this week, with a host of intriguing cards that could result in new deck archetypes. What do you think is the card with the highest potential to be broken?

Off the top of my head, I feel like it's N'Zoth. I feel like he has a big impact in both formats, Wild and Standard, with maybe even more in Wild. Even in Standard I feel like he's one of the first cards I looked at just because he has THE potential to just end the game on turn 10 all the time, and he doesn't really require as much build-around as [card]C'Thun[/card] in a way, because you don't need all of the C'Thun cards. A big metagame impact that he has is that he stops fatigue decks from working, which is a step in the right direction because not a lot of people like the fatigue matches. Some of the Old Gods just end the game not necessarily on turn 10, because it's hard to play them on turn 10, but some time before fatigue.

Whispers also brought in several high-cost Old Gods and a large pool of resources for control. Do you think that these cards will cause the Standard metagame to be slower than the competitive meta-game that we have seen in the past few months?

I feel like the Old Gods don't really have an effect on this. In the control-aggro matchup, no 10-drop almost ever matters. I do feel like Standard is going to be slower but that's mostly because of, say, [card]Nerubian Egg[/card], [card]Haunted Creeper[/card], [card]Muster for Battle[/card] and [card]Shielded Minibot[/card] rotating out. Some of the really strong, sticky early-game minions are gone. I feel like that has more to do with it than the Old Gods. I feel like the Old Gods are more Control versus Control cards. I don't think they affect aggro that much.

If you were to immortalize one card from either Naxxrammas or GvG so that it could be played in Standard, why would it not be [card]Dr Boom[/card]?

I think the current card that I'm saddest to lose is [card]Duplicate[/card]. I feel like with some of the metagame maybe slowing down, Duplicate would have had new chances to shine. Also, some of the problems with Duplicate happen when you move into fatigue matches. With Old Gods, they are kind of stopping that, so I feel that Duplicate would be a really cool card to have.

You have said that you are largely a Mage player and that you always tend to make Mage decks first in any new meta, so losing one of the good Mage tools would definitely affect that.

Is there a particular card from Whispers that’s currently seeing little use, but you hope becomes a more crucial deck component as the meta progresses?

I thought some cards would be better. I guess that some of the Forbidden cards are, as a whole, I can't say underused just because I actually have been focusing mostly on Wild. I just haven't ground enough ladder games to know what everyone else is playing, but it feels like in some of these slower Control decks, the Forbidden cards are really good because they allow you to fill out your curve. I think that's really important for a Control deck. When you're top-decking in the late-game, you can spend all ten mana on one Forbidden card. If you needed a 4 mana 4-4 from some of the [card]Forbidden Ancient[/card], you can play that. [card]Forbidden Healing[/card] is just crazy.

Oh yes, I saw you play Forbidden Healing in your Paladin yesterday, and I think it swung you the game. You were behind on health, and it got you just enough that you staved off the aggression.

Exactly, that card is crazy good. 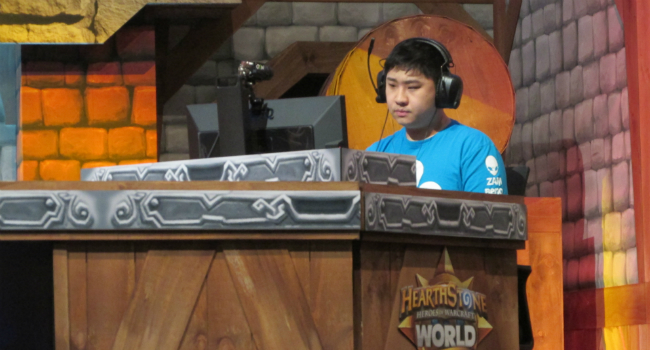 StrifeCro in action at the recent Seoul Cup World Invitational

Are there any particular cards from previous sets we might see revived in play in the near future? We've seen [card]Sylvanas Windrunner[/card] come back to the fore. Is she the only one, or do you think we'll see others?

I think [card]Cairne Bloodhoof[/card] is maybe coming back somewhat, just because it's a strong Deathrattle. They mostly took out a lot of the strong Deathrattles from GvG and Naxx. A lot of N'Zoth decks want to run Deathrattles. Mostly, I think a lot of the 2-3's and 3-2's will come back because of the removal of the likes of Muster, Minibot, and Haunted Creeper. With those cards gone, you can actually expect reasonable results, instead of being absolutely dominated. We'll see a lot of the 3-2 utility cards, like [card]Fallen Hero[/card] or [card]Garrison Commander[/card] maybe. Every class has something like that, such as [card]Cutpurse[/card] for Rogue. Even [card]Flame Juggler[/card] and [card]Huge Toad[/card] could make a comeback.

"I think a lot of the 2-3's and 3-2's will come back because of the removal of the likes of Muster, Minibot, and Haunted Creeper"

As a renowned deck-builder, what are your opinions on both the Standard and the Wild formats? How do you think the introduction of formats will affect your career, the careers of players that are known to be deck-builders as a whole?

Standard should be the most important one. After this tournament, I'm sure almost every competitive tournament will be Standard. As far as how it affects people's careers, I think it's definitely good. This is the biggest change Hearthstone's ever gone through. Not only are they adding new things, they're removing a lot of stuff. There's also the huge balance changes in the Classic cards. All of this definitely helps good deck-builders and everyone altogether. For the last six months, Hearthstone's become more and more boring, and more and more people were complaining about getting bored as a whole. If you look at the tournament density over the last six months, there haven't been many tournaments at all. I've been a pro for more than two years now, and this has been the most peaceful that it's ever been, just because there was much less interest in the meta-game before this patch. I think that the huge change is good for everyone and makes the game a lot bigger.

"I think that the huge change is good for everyone and makes the game a lot bigger."

How’s the Cloud9 life? Do you practice a lot with each other? During ATLC you guys didn’t really, has anything much changed since?

I don't think it's really changed. We don't have a huge roster to begin with, some of the other teams have much bigger rosters, and a lot of us are more individual. Also, over the last months everyone's had varying passion for the game before the patch. So, we'll see - it hasn't changed recently, but maybe with the new expansion we might be doing more stuff together.

Are you in contact much with the other departments of Cloud9, like the Dota 2 team or any of the other teams?

I don't really know almost any team from Cloud 9, but I'm pretty close to some of the League team. Hai was my old room-mate, and now Meteos is my roommate, so I'm really close to them. I go to the C9 League house a decent amount to hang out. I'm okay with a lot of the League team. Other than that, other teams of C9, I've probably met some of the CS:GO team, but rosters are all different now, so I don't know any of them really.

I mentioned the Dota team, and now I remember that C9 doesn't even have a Dota team anymore. My bad!

(laughs) Yeah, actually I knew that!

You haven’t really been in the spotlight lately. Is it still where you want to be? Are you still highly competitive, or are you more relaxed and keen to stream and just enjoy Hearthstone as a game rather than try to be competitive at the highest level?

I kind of have a low work ethic in a way. It's hard to get myself to do something I don't want to do. This was because of the stagnation of the meta-game over the last few months, where the competitive decks before the patch had gotten so strong. What keeps interest in Hearthstone is making decks. Once the decks like Secret Paladin and Zoo are that good, there's not really any room to make decks. There's not any way where you can make home-brewed decks that are competitive. Even if they are slightly worse, I can have a lot of fun making them. But, at some point they are too un-competitive, so I haven't really been into Hearthstone. I've pretty much only played during my streaming times for the past months. I'm looking forward to getting back into it now that the patch has come.

Since the patch came out, I've played pretty much 24/7. I think my competitive level will change. My tournament results have always been linked to the amount I play. It's not like one tournament makes me play a lot. It's more like when I like the game, I just do a lot better in tournaments.

So the results are sort of secondary to your enjoyment of the game?

And, from that enjoyment, how do you find the streaming experience? Is that a platform that you like, or would you prefer to just to play by yourself and not have thousands of people ragging you?

Recently, I've liked streaming more and more. It's almost the only reason why I've been playing Hearthstone in the last three or four months. I definitely don't mind streaming - it's actually gotten more and more fun for me as I stream more. I guess that it's mostly just because I'm maybe more comfortable streaming now than, say, a year or two ago.

Thank you so much, StrifeCro! Do you have any shout-outs, to sponsors and things like that?

StrifeCro: Yeah, shout out to all of the C9 sponsors. (laughs) I can't remember all of them, but you can check out cloud9.gg for a list of them. Also, just shout out to everyone that's just watched my stream a lot and my fans that have stuck around for a long time.

How do you think the recent changes will affect HeartStone?