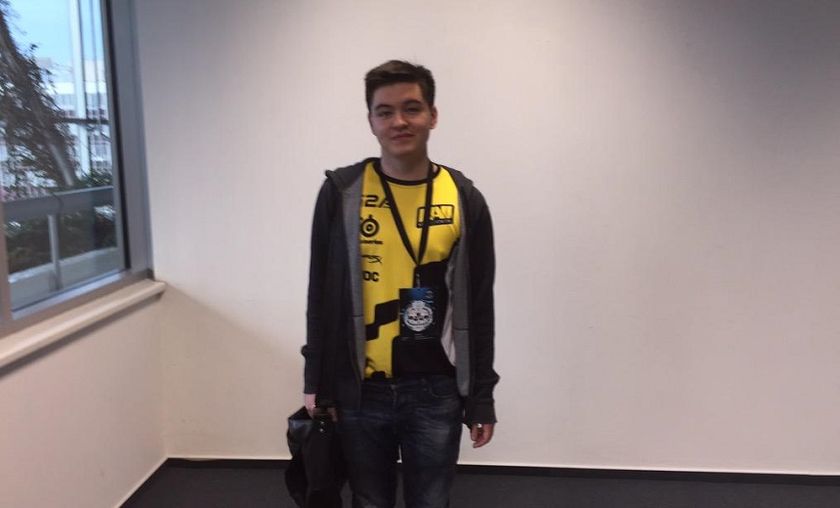 The interview was conducted by Tom Matthiesen

Sebastian "Ostkaka" Engwall just qualified for Blizzcon but we managed to catch him for an interview a bit earlier, right after his victory over Na'Vi teammate Hoej. In the few minutes before his next match, we discussed his choice of Dragon Priest, his "conquest calculator" that helped him prepare for regionals and why Shaman never got to the power level that many expected.

How are you feeling after your first win against Hoej?

Really good, this was an important victory because of the format and right now I’m in a really good spot to qualify.

Let’s talk about your deck choices a bit, because we saw a Dragon Priest which is widely regarded to not be a tier 1 deck unlike Patron, Handlock and Druid. Why did you bring it?

It’s very specific for this tournament because we got to know our round 1 opponents before we submitted our decklists. Hoej is not known for bringing Patron or Handlock so it’s a really specific deck just for him. He has Hunter, he has Secret Paladin and Dragon Priest made all the sense in the world.

While it’s a good counter to Hoej’s aggressive style, how do you think it will do against your other opponents?

It’s certainly a little bit weaker versus them but it still has favorable matches against Druid and Patron. I definitely kept the other people in mind, it’s not like I only prepared for Hoej.

"Dragon Priest was a very specific choice for this tournament, as I knew I was playing Hoej first."

You’re a teammate of Hoej now, you recently got signed by Na'Vi together with Xixo. How’s the Na'Vi experience for you so far?

I’ve always been good friends with Xixo, we lived together in the ROOT house. I don’t know Hoej that well but from what I’ve seen, he plays his own decks and he plays them really well. For this event specifically, it was a bit awkward for us training together but I look forward to practicing with him in the future.

Would you expect him to make it through the next round as well?

He needs to win two in a row now and can’t afford any mistakes. Obviously there’s always a chance but I think he’s not in a great spot.

Now that Na'Vi has signed three players and with tournaments like ATLC on the scene which use three-player line-ups, can you say something about Na'Vi being in the next season?

I haven’t heard anything about it. Obviously I would like us to be invited but Xixo has some beef with Archon and me and Hoej are not big streamers, which is something Archon valued a lot in the first season. So there’s a chance that we actually don’t get invited.

You mentioned you didn’t practice that much with Hoej, so how did you prepare for this event as a whole?

I did a huge spreadsheet to look at all the decks, especially against Hoej. The metagame is just so different if he doesn’t play Handlock or Patron so I had to work it all out from scratch and figure out the match-ups. I had a big table similar to LiquidHearth’s and then had a guy who works with game theory to build a conquest calculator to figure out the exact percentages. I did a lot, a lot of work to figure out which the best decks are and I believe these three are the ones.

"I had a guy who works with game theory to build me a conquest calculator to figure out the best decks for the tournament."

It paid out well. Will you do the same thing if you make it to BlizzCon?

Absolutely. I have most of the work done now, so I only have to tweak the numbers.

Looking at the other regions, the APAC representatives were determined yesterday (editor’s note: Kranich, Neilyo, Kno and Pinpingho). Who do you think is the strongest there?

I haven’t really kept too much track of it but one of my good friends Kranich now made back to back world finals. I haven’t watched him that much because I was busy preparing for my own tournaments, but he’s definitely a very strong contender.

After TGT was announced, a lot of players expected Shaman to be strong with the new totem cards but it’s obviously not as good as people thought it to be. What’s your opinion on this?

I think a lot of people overrated both the [card]Totem Golem[/card], which is an average card, nothing special, and also the [card]Thunder Bluff Valiant[/card]. The only good card was the [card]Tuskarr Totemic[/card], it’s an insane, Shredder-level card, but just that card alone is not enough to make Shaman good. Midrange Shaman would need a lot more cards before it’s viable.