We asked 30 Hearthstone players to predict the meta at DreamHack Summer. This is what they answered

DreamHack Summer is around the corner, enticing players and viewers alike with its pantheon of big names and five figure prize purse. We know the invites, we even know the group distribution and we know the Hearthstone scene is in for a memorable event.

Being the biggest Hearthstone tournament to date with 268 players fighting for $25,000, we had to take the opportunity and create an interesting preview of our readers. With players' stories just developing, however, we decided to take a different approach compared to our Dota 2 or LoL coverage.

Over the last two days, we asked more than thirty professional Hearthstone players, casters and streamers to predict the meta at the upcoming DreamHack Summer. We shot them these two questions:

1) Which three decks do you think will define the meta at DreamHack Summer?
2) Which two "underdog" decks do you want to/are excited to see at the same event?

Being awesome as they are, the Hearthstone player base was quick to respond and the table with their answers grew rapidly. We heard from players of different esteem: from the most known names like Amaz, Savjz, StrifeCro or Reynad, to weekly cup kings like ThijsNL and Kisstafer and even established Hearthstone casters and afficionados such as ChanmanV, Koyuki and ThatsAdmirable.

Below are their responses, in both table and graphical form.

The answers
Putting it all on picture (because graphs are cool) 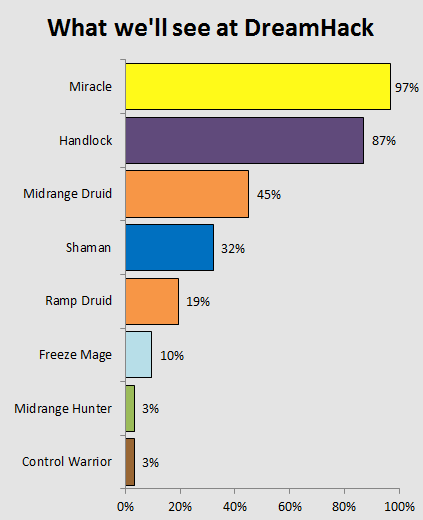 Honestly, who didn't expect this? On the very top of the charts, leading with good 40 to 50% before the third place finisher we have Miracle Rogue on first place and Handlock on second place, making them the decks to beat this weekend.

Judging by the pros' answers, the meta at Dreamhack won't be much different than that on ladder. Miracle has been the terror of constructed play and is the go-to deck for the players who reached the top of the legend ranks. Through the help of Gadgetzan Auctioneer, Valeera has been wrecking face in competitive play too, as tournaments like Deck Wars Season 1 and Gentlemen Cup saw heavy favoritism towards the build.

Although considered an overall solid deck which can win any match-up, a natural counter was found in the face of Handlock. The myriad of taunts in the control Warlocks outnumber the board control mechanics of the Miracle Rogue, making it the deck to stop the Gadgetzan Miracle. As a result we have these percentages - the current best deck on the top and its hard counter just below it.

Coming on #3 is the new-school mid-range Druid, known as the fourth iteration of our Druid lord and savior StrifeCro. The freelancer currently playing for DogeHouse at Gentlemen Cup has long been the person defining the modern Druid decks and he didn't disappoint this time either. To combat the slower meta of Handlocks and Miracles, StrifeCro's new age Druid packs a ton of explosive power, featuring double Force of Nature/Savage Roar combo and two Argent Commanders, all included for the purpose of a quick beat down. The deck also has 1x Big Game Hunter and a Black Knight for the Handlock match-up, widely considered the bane of Druids.

On #4 we see Shaman, which is class largely considered to have no really terrible match-up now that Hunter's are gone. The Hexes and Earthshocks are a natural counter to Handlock while taunt Totems, Feral Spirit and the heavy-hitting Doomhammer help the Shaman against Miracle Rogue.

The only other four specs mentioned by pros are Ramp Druid, Freeze Mage, Midrange Hunter and Control Warrior, in that order and starting at 19%. Ramp Druids were on the rise after DreamHack Bucharest as they performed excellently against Hunters but because they're one Sap away from death to a Shadowstepped Leeroy, their popularity has been waning down. Freeze Mage, on the other hand, is a deck that's been on the rise for the past few weeks, as it almost always wins against Handlock and is close to an auto-win against Miracle as well. In other words - a strictly anti-meta deck. 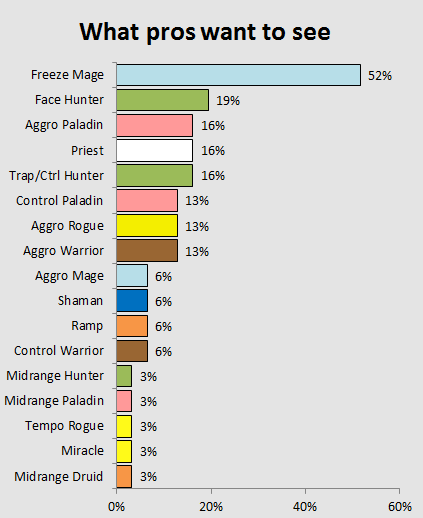 As you might've guessed, although pros were given two slots to pick decks they're excited about, there is a lot more variety in their votes.

On first place with good 30%+ lead before the runner-up is the Freeze Mage, a deck which, as we already mentioned, is enjoying a rising popularity on the ladder due to performing excellently against the strong of the day. If you want to learn how to beat Handlocks and Miracles with Jaina, than our most recent guide is the article for you.

Moving down the chart, we see lots of favoritism towards Hunter. Apparently, the resentment towards Rexxard is gone and now that Unleash the Hounds is nerfed, players do crave to see more bow-and-arrow action.

Expectedly, Paladins and Priests are also up there, being a rare sight on the ladder. The Aggro Pallys (also known as Shockadins) are placed third while the control Paladins are down at sixth place with good 13%. In between, a single white bar represents the desire for some Priest plays. We can't say we're not interested in that as well.

That's cool but how about some decklists?

Please note, that the decklists below are by no means the only versions of these builds and there's always a room for switching cards based on personal preference or the state of the meta. 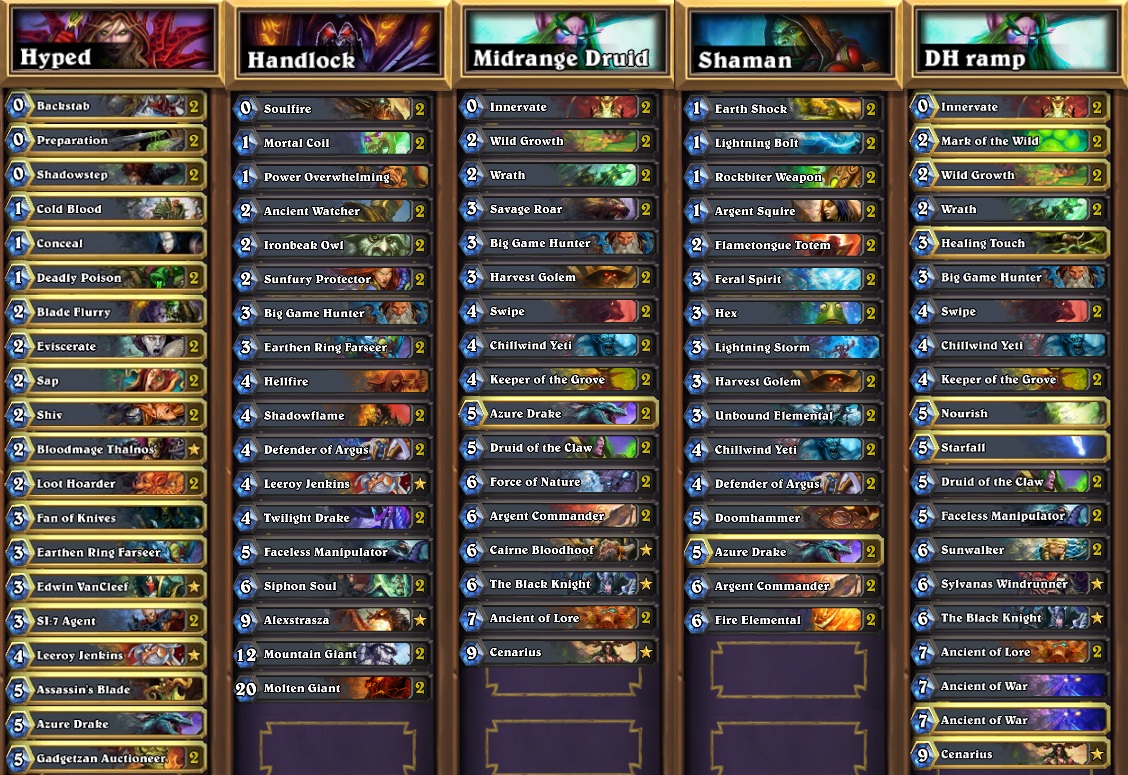 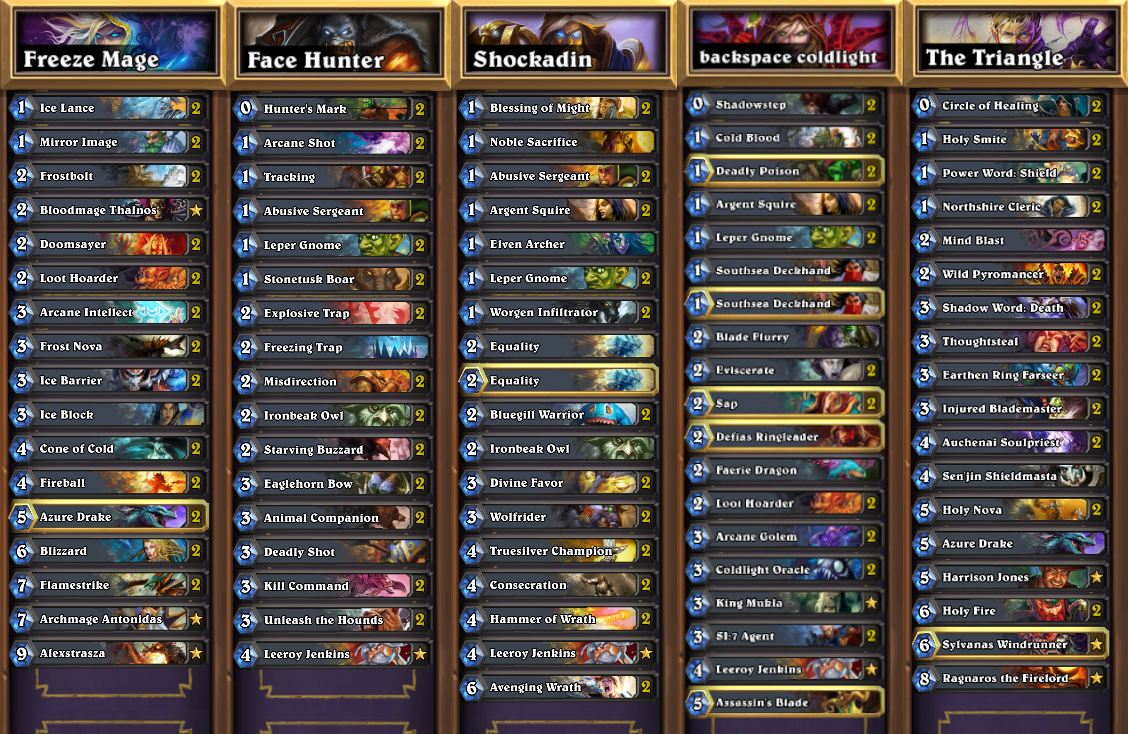 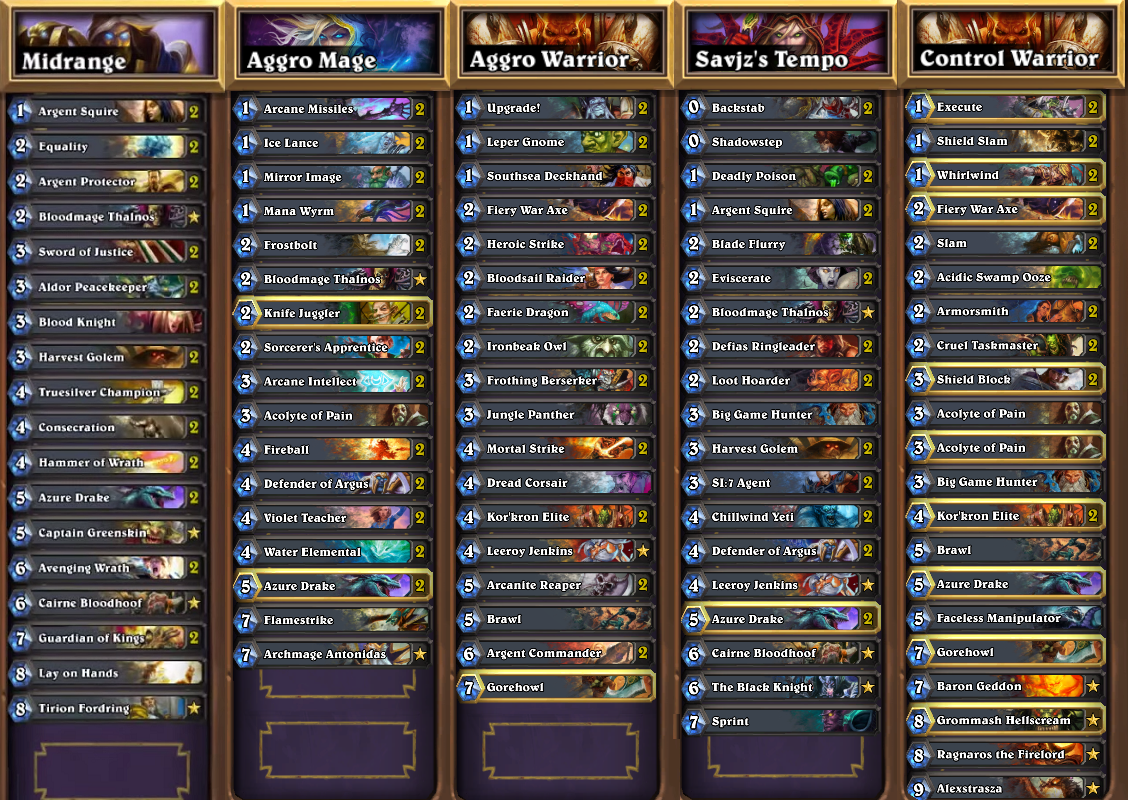