Continuing from yesterday's series, LGD will take on DK after their massive comback to take game one. We will see if LGD can wrap up the series or DK can take it to a game 3.

Draft - After a farily routine series of picks and bans for both sides, two surprises come out in the last two picks. Mushi gets his favoured Outworld Devourer for the mid lane against Viper. As for the LGD last pick we see a Sniper come out of the bag to try and carry the game.

2:04 FIRST BLOOD - DK take their aggressive trilane to take on the Sniper and get a very good 3-1 exchange, wiping the heroes in the LGD safe lanne

5:25 - Successful rotation manages to kill off Viper at mid, which is an important kill

6:03 - DK strike back with their own rotation, committing Ravage to take out Doom in the LGD offlane

7:18 - Rotation to mid to gank Mushi, which they manage to follow up and take out Wraith King as well

10:04 - Even one for one trade in the Radiant jungle, but LGD are forced to use Doom

13:02 - three for two exchange in favour of DK, with Mushi picking up a killing spree

15:37 - DK manage to roll straight into Roshan and take the objective successfuly

16:00 - Sniper gets destroyed by Ice Blast and the rest of the DK team

17:38 - Mushi is just wreaking havoc on the LGD line up, using the orb to just DPS down a quick double kill

21:47 - Sniper gets caught by the Astral Imprisonment and then just one shot by the OD ultmiate

27:47 GG - DK assault the LGD highground, using the Blink on Tidehunter to initiate. A very quick Doom actually stops him from getting the Ravage off, but it doesn't matter. Razor continues to take the tier 3 and as they push into the Barracks, LGD call the game. 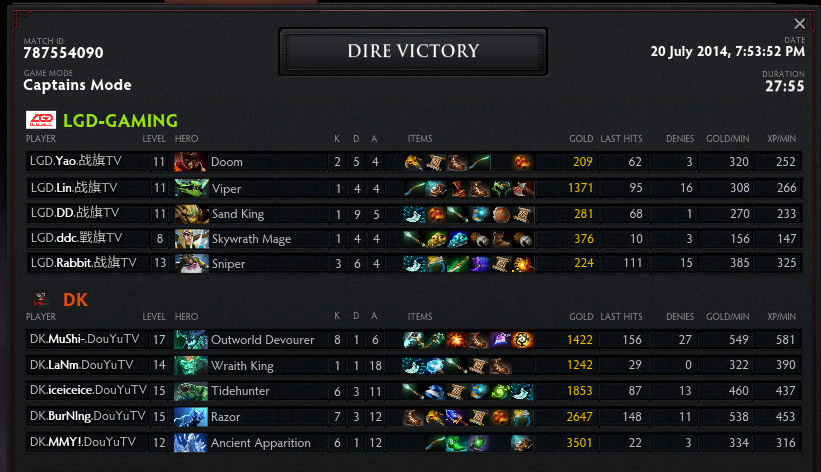 Draft - DK pick up another big mid Mushi hero in the form of Shadow Fiend. LGD respond by picking a strong ganking line up with Batrider and Centaur, leaving Shadow Shaman and Visage to roam around and try and find farm whilst pushing and split pushing.

3:35 FIRST BLOOD - DK takes the first kill to give them an early lead

7:01 - Iceiceice gets a little too far up in the offlane and is caught by a Centaur Stampede into Viper's DPS

11:20 - DK Finger of Death Shadow Shaman to blow him up, but a great counter initation from LGD means they catch up to Mushi and just kill him bfore Requiem of Souls

12:53 - Lasso onto Earthshaker makes sure that he gets bursted down

17:53  - A big fight happens at the radiant tier one. All the big ultimates get used from DK, but LGD hang on with a great defense, using the tree line expertly

20:07 - LGD find an great initation at mid, managing to lock down Mushi again and taking the tier one tower

23:19 - DK take a sneaky Roshan to try and claim something back

39:40 - DK take a massive win at bottom, forcing a buyback from Batrider and instantly killing him off again. This allows them to take the bottom LGD barracks. They move into mid, but are forced back

41:50 GG - Mushi manages to snowball out of control with so much damage and gold that LGD struggle to ever kill him. They pick off Centaur and Batrider and that is enough for DK to break into the second lane of barracks and win the game 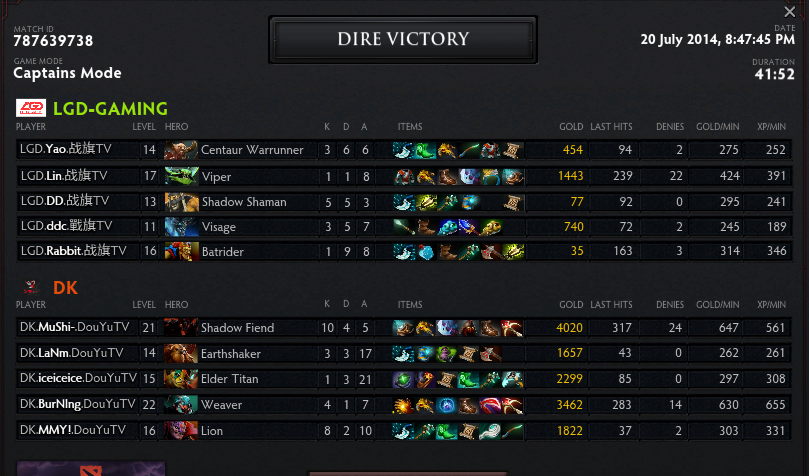