After 60 minutes of DK's dominance, LGD managed to turn the tides and snatch the first victory from their opponent in the best-of-three series. The two teams will continue their battle tomorrow, along with C9 and ViCi Gaming. The winners of the two matches will fight for the chance to play against Evil Geniuses in the LB final.

1:00 - The first blood goes to DK after a trilane assault against Yao's Centaur.

8:00 - MuShi and BurNing enter the Radiant jungle and catch both Yao and Rabbit out of position.

9:00 - Continuous fighting under the bottom Dire tier-one tower. DK's gank causes the death of Rabbit once again, but iceiceice goes down in return.

12:00 - DK keeps pressuring their opponent, forcing a teamfight near the mid tier-one tower. The teamfight ends 3-1 in favor of DK, and the tower is about to fall.

13:00 - Abusing DK's lack of cooldowns, LGD fight to protect their tower. A great Paralyzing Cask by ddc brings the death of three. The tower eventually goes down.

15:00 - DK's Roshan raid gets intercepted by LGD, but they are unable to snatch the lasthit and the Aegis. The hero outcome of the fight is 3-1 in favor of DK, but the Aegis was removed just as it was picked.

17:00 - LGD's gank attempt at the top lane goes horribly wrong, as MMY steals Paralyzing Cask and turns the fight around. They lose three heroes and the top tier-two tower. The score is currently 9-16 for DK.

21:00 - More and more fights are being forced! Rabbit jumps and lassos MuShi at the center of the map and the Malaysian goes down instantly, but BurNing's counter initiation turns the fight around for DK. While both Lin and DDC survive, the rest go down for LGD killing only two in exchange.

26:00 - The history repeats itself as DK gets caught inside the Roshan pit once again, and the Aegis gets instantly lost. Using Lycan's howl, LGD destroys the top tier-two tower as well, but Rabbit goes down yet again to DK's response.

30:00 - Both teams have two tier-two towers standing. DK is currently leading the kill race with 24-11, and the Aghanim's Scepter is now complete on BurNing's Brewmaster.

32:00 - BurNing and iceiceice attempt to grab a kill without their team, but LGD's quick response results in both their deaths. 2-0 fight for LGD, but Roshan has not respawned yet so they cannot abuse their numeric advantage.

36:00 - Lin gets caught and slain for 60 seconds without buyback. This results in the destruction of all the remaining outer towers AND a free Roshan for DK.

40:00 - We have entered a slight farming period for the two teams, and the big items have just arrived for DK. Scythe of Vyse for BurNing, Satanic and Daedalus for Mushi, Monkey King Bar for iceiceice. On the other hand, DD has completed an Assault Cuirass and Heaven's Halberd on his support Alchemist.

46:00 - Yao gets sniped inside the Radiant jungle and currently has no buyback. This may be DK's chance to breach LGD's base, but MuShi's Aegis just expired. They may need to wait for yet another Roshan and Cheese to seal the deal.

49:00 - What a quick turn of events! DK enters the Roshan pit and LGD attempt to prevent them from getting yet another Aegis and Cheese. However, DK take down the rock giant and catch and kill the retreating Lin, forcing the Black King Bar and the buyback! Having the Aegis and the confidence, DK destroys LGD inside their own base with iceiceice grabbing an Ultra kill, and two sets of barracks go down! Only the bottom barracks stand between DK and their victory.

53:00 - LGD buys some time by killing the solo BurNing inside their jungle.

54:00 - It's now or never for LGD! They go straight for the middle barracks and force a teamfight inside DK's base! BurNing and LaNm get slain, along with Rabbit and ddc. Everyone buys back, but DK manages to grab yet another Roshan.

62:00 - DK is afraid to go for the last set of barracks! DD is now getting close to being 6slotted, and LGD now has a farmed Alchemist along with the 6-slotted Lycan and Batrider. The Dire heroes are being very careful, as they know that one bad fight may result in loss.

64:00 - Lin gets initiated upon once again, but his Armlet toggling saves his life and turns the fight around for LGD! MuShi, LaNm and MMY go down without killing anyone! Iceiceice's split pushing prevents LGD for pushing though.

67:00 - UNBELIEVABLE! LGD march to the middle lane once again, and they manage to instantly isolate and slay iceiceice, MuShi and BurNing! Iceiceice buys back and goes for the Radiant Ancient, but it is too late! LGD rush and destroy the Ancient, staging probably the biggest comeback of the tournament so far. 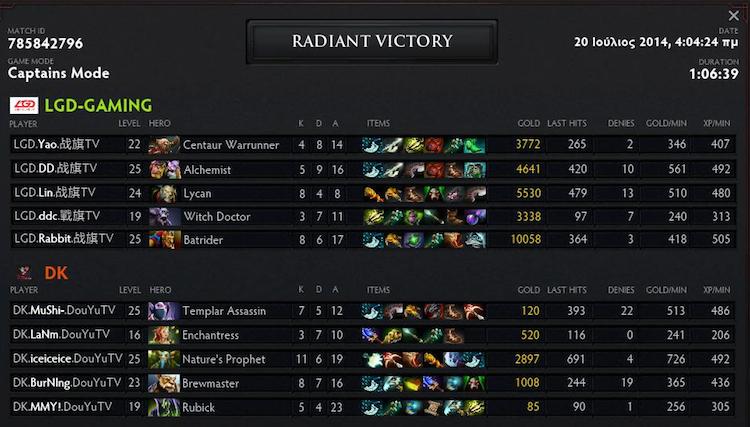 Andreas “drouks” St
There's really not much to say about Andreas 'drouks' Stavridakis, except that he sleeps two hours a day, plays the guitar and survives solely on Diet Coke. He also writes about DotA sometimes.
Share Tweet
2 people reacted to this post