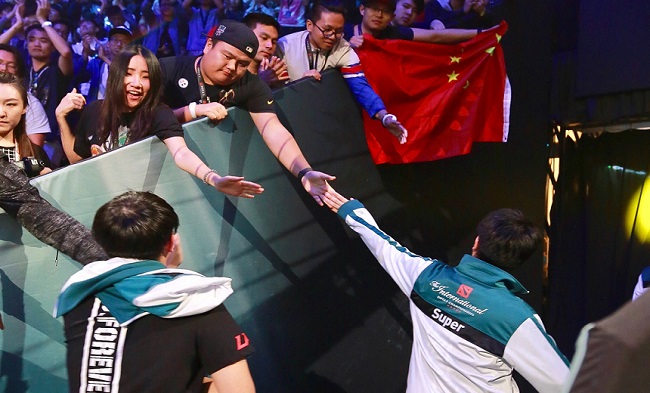 As a member of the community, being able to access the professionals who compete and who produce content for Dota 2 has always made me feel more connected as a fan. It makes me feel more invested, I’m more engaged, and it gives me additional ways to connect with other fans. I’ve often been surprised by how candid and open professionals in Dota 2 have been with the community. There’s certainly plenty of carefully crafted interaction, but I think casual, spontaneous opportunities outweigh the manufactured ones. Collectively, this access and interaction create a sense of a broader, united Dota 2 community.

While professionalism can be treated as a bad word in esports (see reactions to Blizzard imposing standards for conduct on their Overwatch League players), I think there’s an underlying concern that professionalism really means more filtered. Professionals seem less real and accessible when we know their behavior is more restricted, and that organizations require them to help craft a specific brand message. As fans, we want to believe the people we support are authentic and genuine. We want to feel like we know them, in some small way, and that when they respond to us on Twitter or reply to our Twitch chat message, it’s because we’re having a real conversation rather than it being a marketing moment.

Organizations are taking the initiative to produce access to their players. Some teams film regular content, such as behind-the-scenes material, interviews, and some advertising opportunities for sponsors. However, this is just one of the many ways that fans can get insight into the lives and personalities of professionals. There are many others that are much more direct and less heavily polished.

Quite often we hear about grievances from players through unfiltered Twitlonger and blog posts. This can be because the players are trying to leverage community support for their cause or to explain unusual circumstances to fans. I think these communications allow the community to participate in the industry—there’s power in being appealed to directly. It includes the fan base in motivating change or compensation or whatever the player is calling for, and I think it also makes the community feel included as an entity to whom the players can air their frustrations.

Similarly, Dota 2 professionals have shared their celebrations and struggles with the community. Jake “SirActionSlacks” Kenner filmed his wedding proposal, and then livestreamed his wedding, Jorien “Sheever” van der Heijden is blogging her experiences with breast cancer, and several professionals have recently posted upcoming or current birth announcements (congratulations TrentPax and family!). The community isn’t held at a distance but instead is invited to commiserate and celebrate as well.

Reddit, Discord servers, forums, and other community spaces provide niche areas for fans and professionals to interact. Teams, production studios, and tournament organizers have created Discord servers for specific interaction. Spaces like these can be highly regulated and used as primary announcement and specific fanservice activity sites, but they can also be very casual. It’s possible to have spontaneous conversations with favorite players or casters about movies or food or any number of other entirely normal topics of conversation.

There are some professionals who do quite a bit of streaming. There can be contractual obligations to maintain a certain profile or provide a certain number of hours of sponsor product on camera. And then there are the individuals who make their living or supplement their living with streaming. In those cases, engaging with viewers is a key part of building their community and brand. Some streams are more interactive than others, with the streamer chatting and playing games with viewers. Some are more performative, with streamers adopting a persona or playing up certain personality traits. Either way, streaming can be an important tool for professionals to reach out to their fan base and to bond with the community.

Playing the game together is perhaps one of the most fundamental ways for community members to interact with professionals. A shared love of the game motivates the esports scene, for both contributors and consumers. Public matchmaking makes it possible for fans (especially those who are quite skilled at the game) to be thrown into a game with a professional.There may not be a lot of verbal interaction in these cases, but for many of us, bonding over video games is an integral part of our friendships. It’s also one of the aspects of the esports scene that separates it from other industries—the odds of running into a professional in Dota 2 are surely higher than the likelihood of playing a game of pick-up basketball with your favorite NBA player or spontaneously jamming with your favorite band.

Are there benefits to having so much access to the people working In the esports scene? I think it bonds the community together, making fans feel invested in the success of players and talent. The people we’re supporting with our viewership and wallets are people who rose out of our community. It also reflects the origins of Dota 2 as a labor of love and competitive spirit rather than as a pre-packaged product.

Essentially, we’re all in this together. As fans, we want to continue to enjoy high-level competition and entertaining content. We want to connect with other people who are also passionate about Dota2. It seems logical to me that the people who work in the esports scene share those goals, alongside their own professional ones. Recognizing and building these connections is what upgraded me from being a casual spectator to an invested fan.

Do you think access to the pros is more filtered or more authentic?

More authentic! There's lots of spontaneous and genuine interaction!
Thank you for voting!
More filtered! Brands rule everything on the Internet!
Thank you for voting!
Chelsea “Daeja” Jack
I love talking about esports and books. I think compassion and curiosity are really important and that a balance between serious and silly keeps life interesting. You can follow me on Twitter @writingdaeja
Share Tweet
136 people reacted to this post