Bomber does not come to one's mind as one of the best TvZ players in the world. Although he may have a decent shout based on his recent victories over Jaedong and Scarlett at the WCS Season 2 Final, I still rate INnoVation as the undisputed number one TvZ player now. However, if you compare Bomber's TvZ games with INnoVation's, they adopt very different style. If INnoVation's TvZ is the textbook style, then Bomber's is definitely unorthodox.

TvZ is Bomber's worst match up since Wings of Liberty. Although Bomber has shown that his worst is far from bad recently, statistically it is not top notch. TLPD: 22 win/ 20 lose (52.38%)

If the WCS Season 2 Final games are excluded, his win rate falls below 50%. Jaedong's ZvP is the perfect analogy for Bomber's TvZ. In fact, it is his relatively poor TvZ that prevented him from qualifying WCS Season 1 Final. 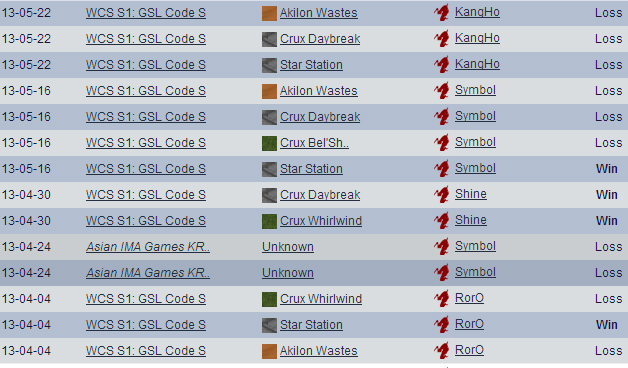 Moving away from statistics, Bomber's TvZ style is one of a kind. He emphasizes on macro since the Wings of Liberty days. Bomber likes to get a third command center early and just defend. He carries this approach to Heart of the Swarm. Although getting a quick third command center is considered standard in modern TvZ, Bomber takes it to the next level. He rarely has any units outside his base until he reaches around 180 supply with +2/+2. His games against Scarlett and Jaedong on Star Station sum up his unique TvZ style.

Before I go into the actual analysis of Bomber's TvZ, let's lay down what are considered the key concepts in TvZ.

If there is a match up that Terran should wall off, it is against Zerg. Early Zerglings run by can be game ending.

In general, every TvZ build out there aims to be economical to a certain extent (exclude cheese like 11/11 proxy). So you do not see any 1-1-1 or gas before barrack builds in TvZ. Zerg can shut them down effectively.

This is an extension from point 2. Although Terran do not emphasize on specific attack early on, it is important to have some forms of control. At the basic level, it is Hellions. They provide map control and have the potential to deal massive damage if Zerg "over-drone". This is important as Zerg can get out of control if they can macro up undisturbed

4. Do not fight on creep

Whenever possible, do not fight on creep. Zerg trade much more efficiently on creep with Baneling and Zergling speed. Further, they know the position and composition of Terran army on creep, and hence, creep allows Zerg to prepare for the best answer. For example, set up flank and catching unsieged army. Thus, it is vital to scan and clear creep, instead of just walking the army on creep.

Bomber's games in WCS Season 2 Final do not follow these five basic concepts. Some work to his favor, but some do not.

1. Wall off is optional

Bomber still wall off, but it is not a must. There are games whereby he does not build his first supply depot on top of the ramp. For example, his game against Scarlett on Bel'Shir Vestige. In that game, Bomber used a one barrack expand into three barracks before gas against Scarlett. The build shapes up to a combat shield timing to snipe the third hatchery. It is important to deny scouting for this to work. In line with this, the "weird" position of the first supply depot is to spot overlord. Interestingly, the subsequent supply depots are not built at the entrance of the natural. They are built on top of the ramp instead. Still, they deny scout to set up for the combat shield timing. 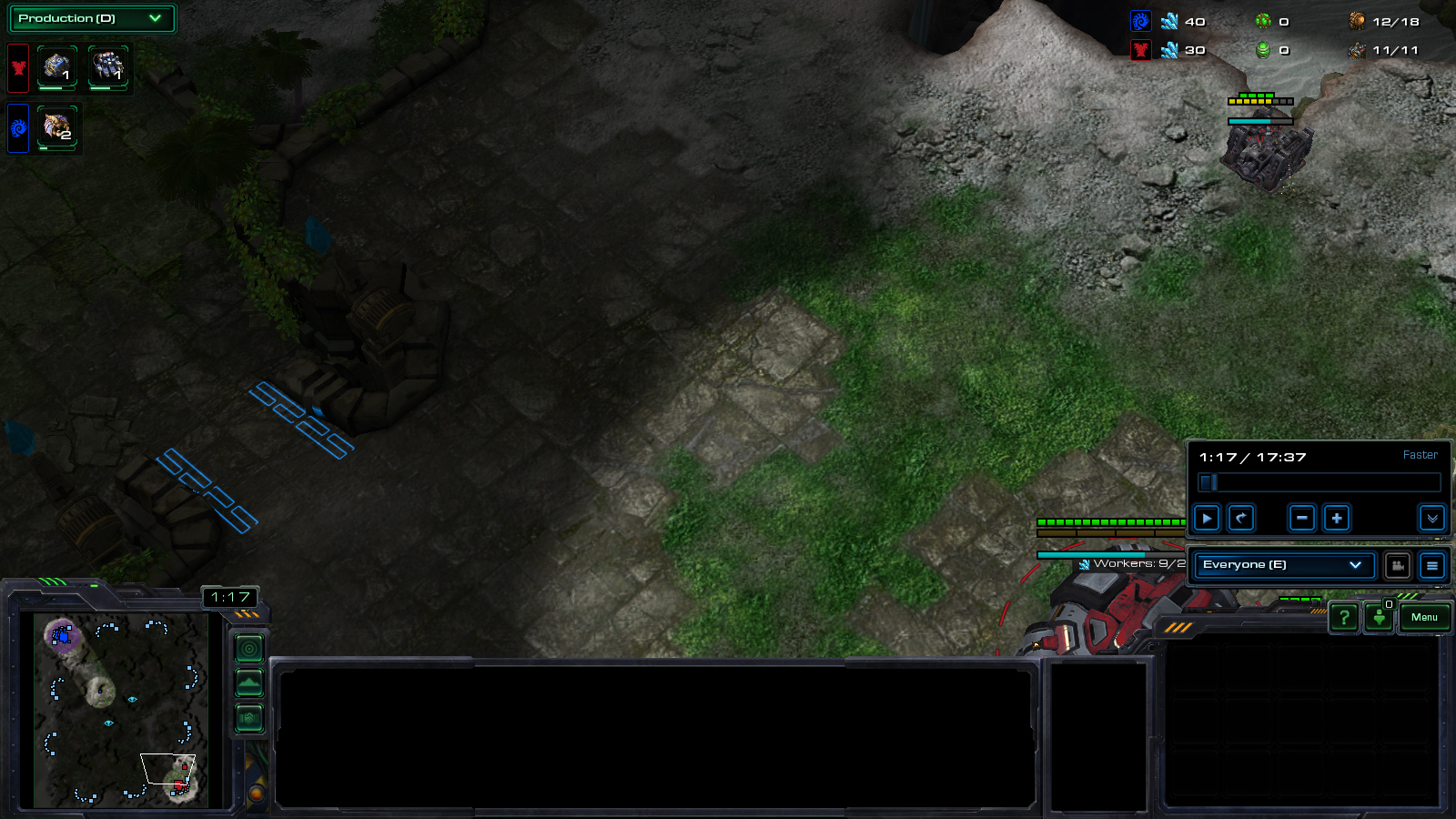 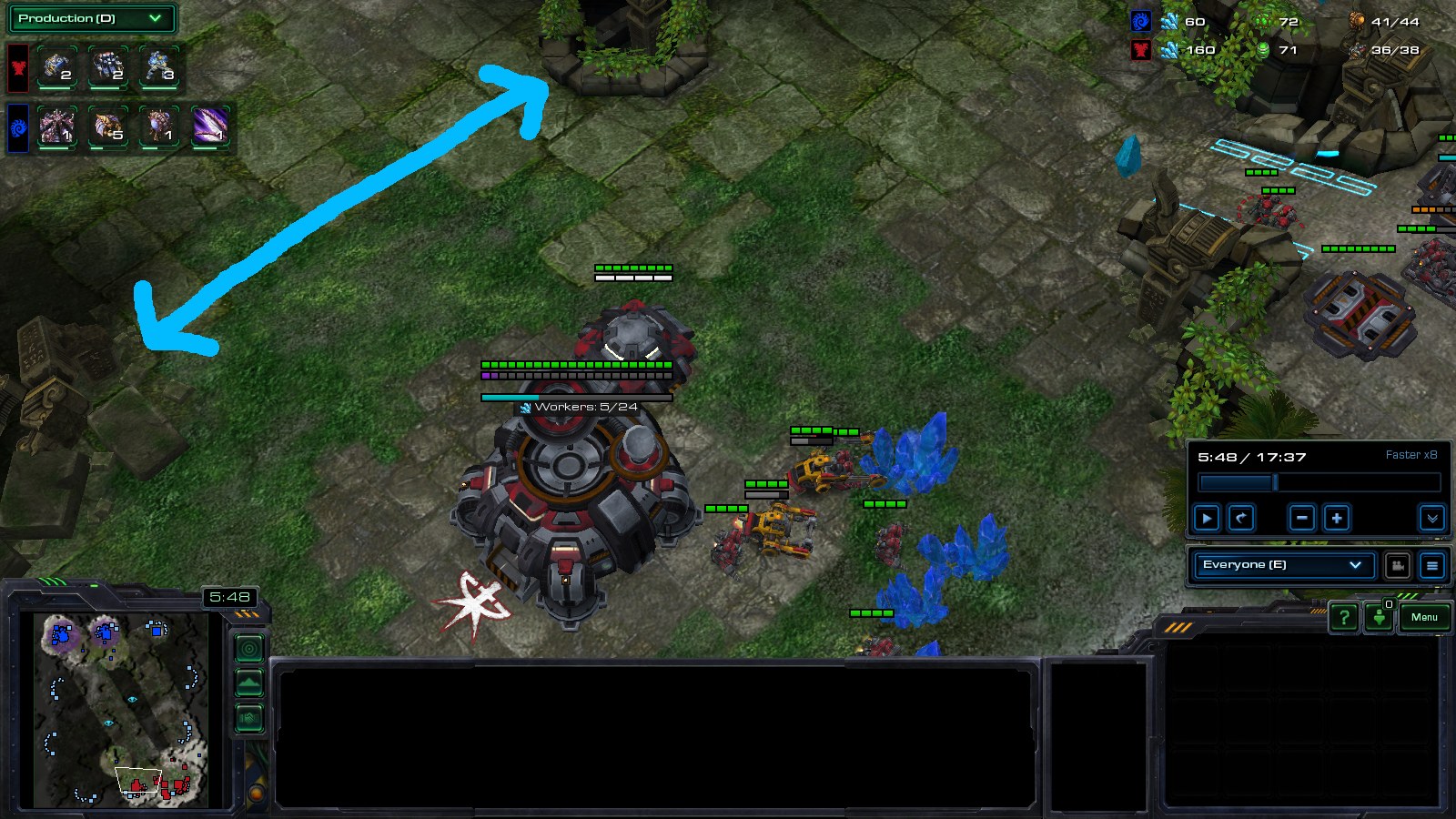 2. Early attack can be effective if they are unexpected 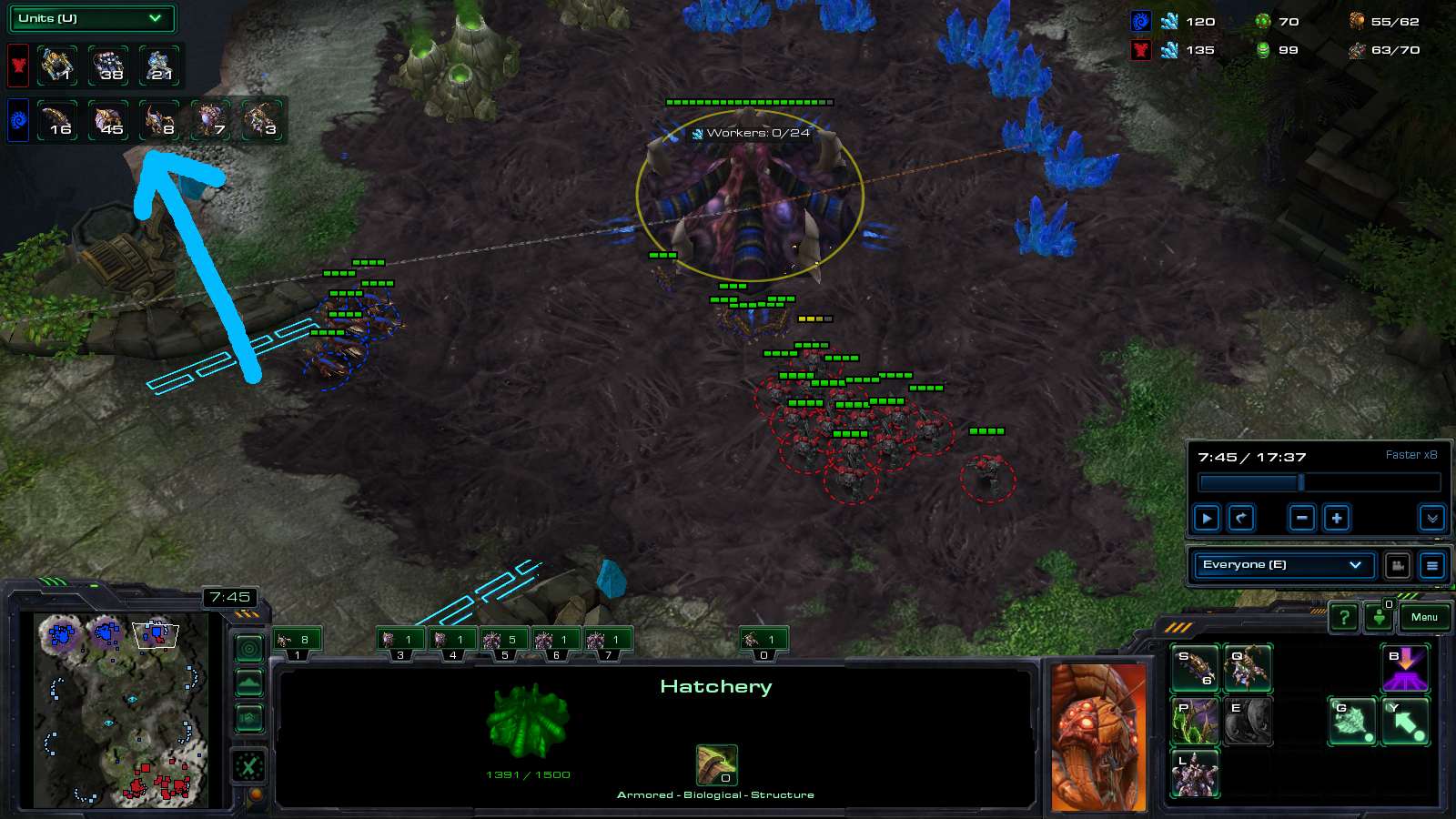 Bomber applies the same approach even when he uses a standard INnoVation 14CC into three command centre build. He gets only four Hellions instead of six, and runs them to the mineral line to trade with Drones. These Hellions are typically meant to serve as map control units, and scout for potential all-in. Thus, Terran would generally rather to keep them alive than to do a risky run by.

On the flip side, such assumption can be an "unexpected" factor that catches Zerg off guard. 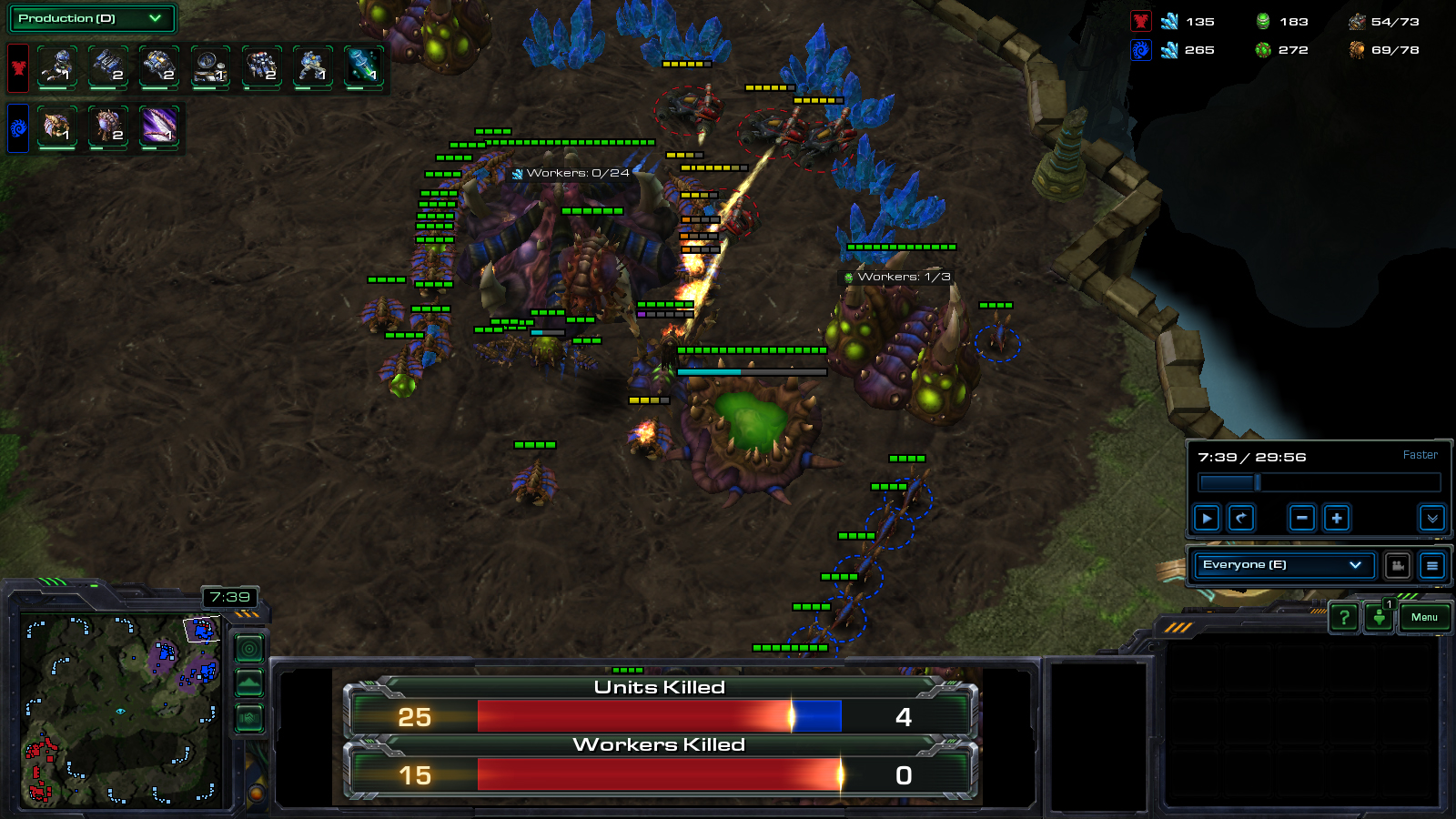 Bomber chose a macro oriented passive build on Star Station against both Scarlett and Jaedong.

Instead of converging back to a Hellion opening after the third command centre, Bomber built three barracks. With the additional barracks, his intention is clear. Play defensive and move out with +2/+2.

However, Zerg get +2/+2 before Terran at around 13:00. Moreover, Zerg is well saturated with close to 80 Drones by then. 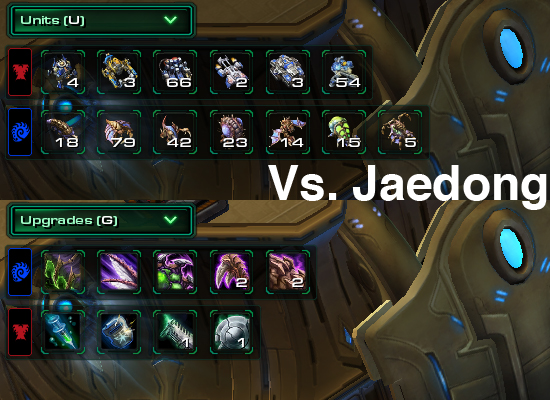 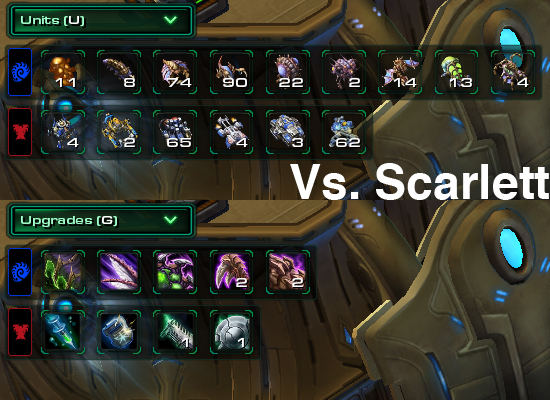 For both games, Bomber chose to move out at around 13:15. The Zerg players with the upgrade advantage were more than willing to engage. While Bomber was crushed by Scarlett because of his poor positioning and unsieged Tanks, he had a more successful engagement against Jaedong. Nevertheless, his build is questionable, as it does not shape up well for a timing attack and also does not provide a superior economy. Furthermore, in Jaedong's game, the creep spread was out of control and had almost reached Bomber's base. In many ways, such passive macro build is inferior to INnoVation's standard 14CC into Hellions and three command centre build. It is hard to understand what Bomber sees in this build. 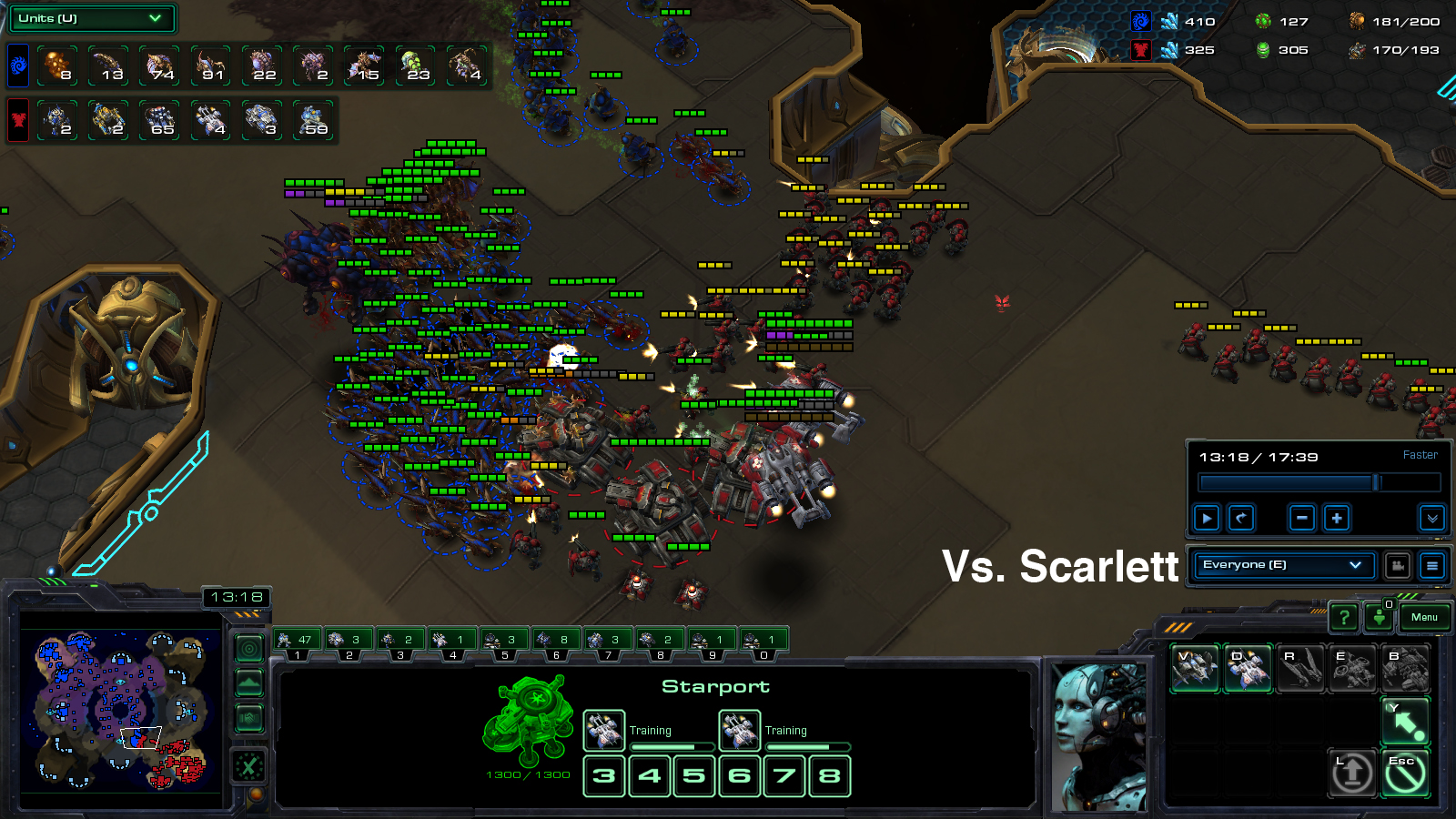 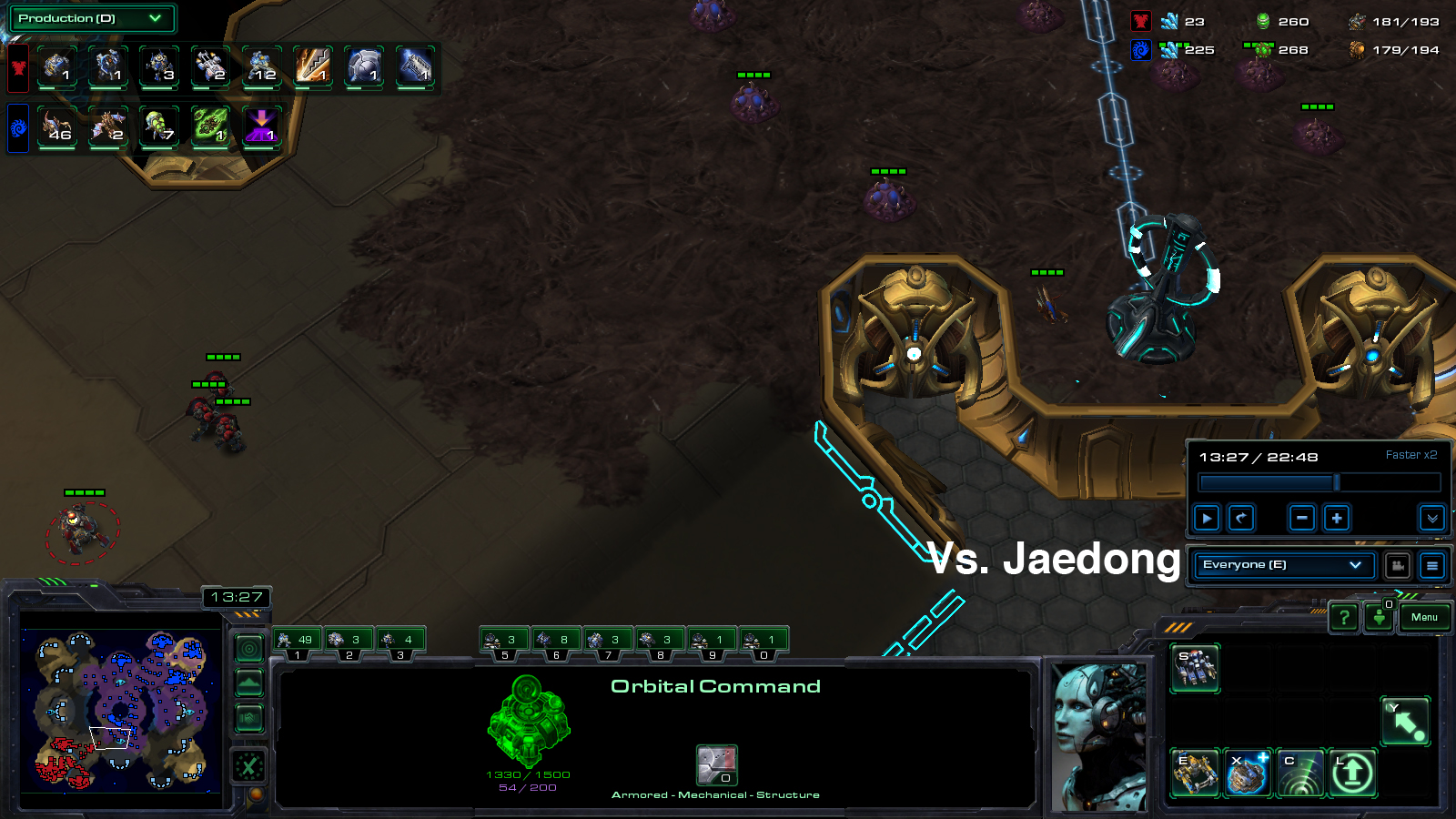 This is perhaps the most defining aspect of Bomber's TvZ. He uses minimum number of scan to the extent that he battles on creep.

Let's use the game on Newkirk Precinct between Bomber and Scarlett as an example. Bomber used a standard 14CC into three command center build and moved out at around 10:30. He used one scan to clear active creep tumors. Typical. 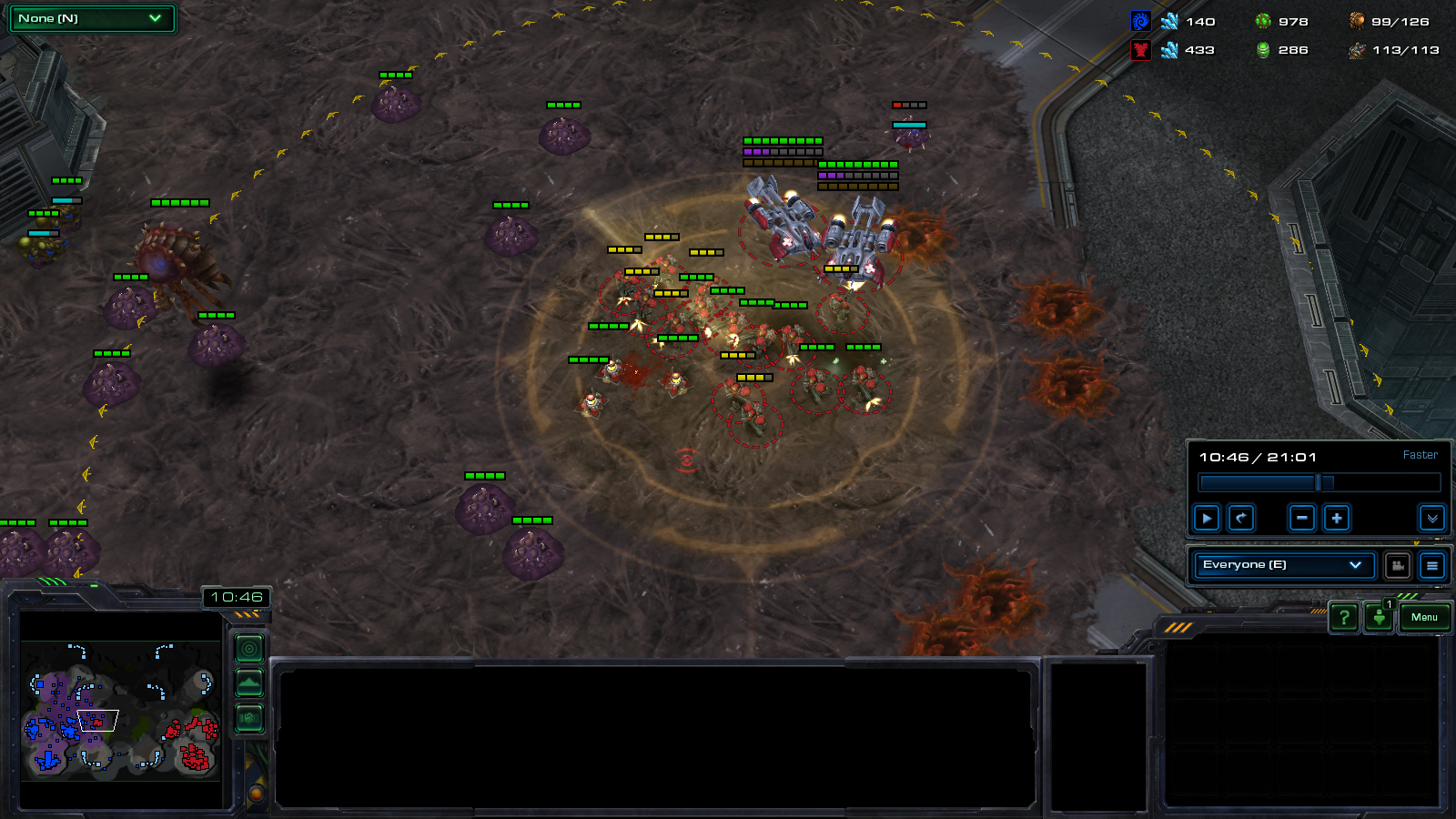 Later, Bomber made a good engagement and killed the third hatchery. His army then walked straight toward the fourth, when it was a good opportunity to scan and kill creep before regroup. 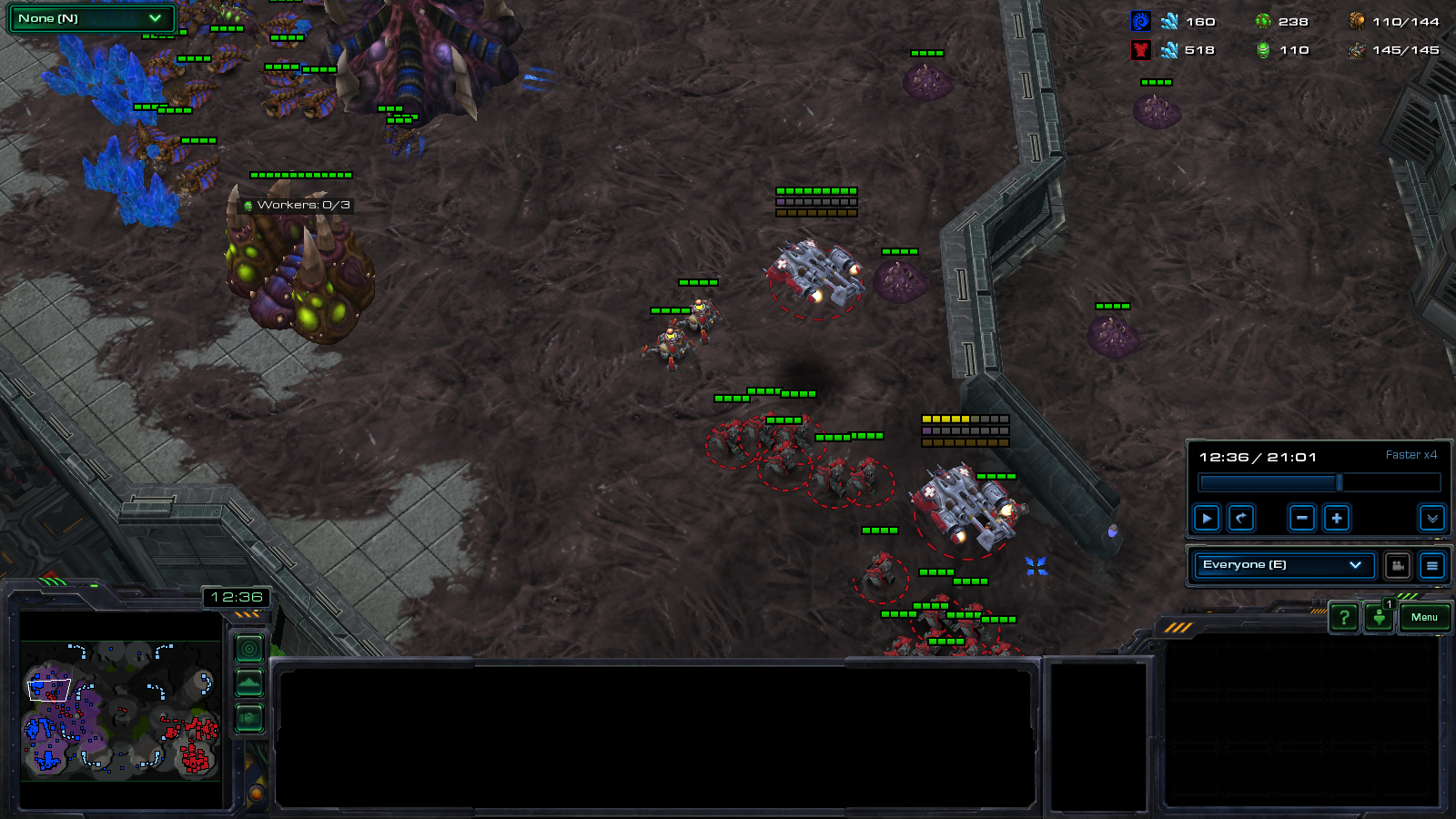 Bomber moved out with his second batch of army after the first was cleared up by Scarlett. He spent several scans along the entire edge of the creep on the map to kill active tumors (14:00 - 16:00). The aim is simply to kill active tumors to prevent further creep spread. Unlike other Terran players, he does not want to scan on "dead" tumors. As a result, Bomber has to battle on creep. Nevertheless, he is still capable to trade well enough to overrun his opponent. This is counter intuitive because Terran should not trade well on creep. Then how did he manage to do that? Bomber simply overruns his opponent with numbers. He spends his orbital command's energy on Mule instead of scan. This ensures he can outproduce his opponent.

Bomber would rather scan to know the position of opponent's army is and not use it to clear creep. 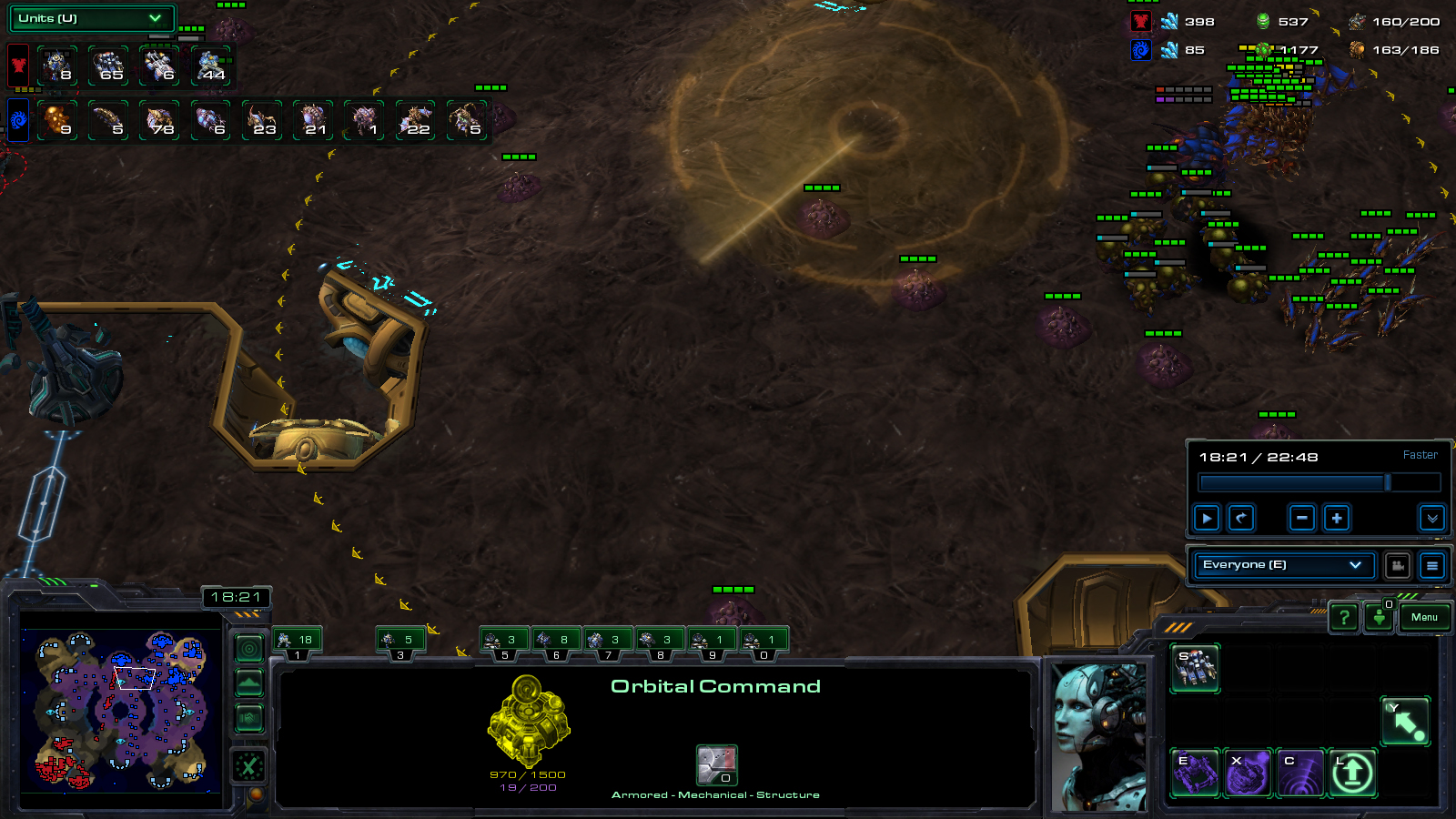 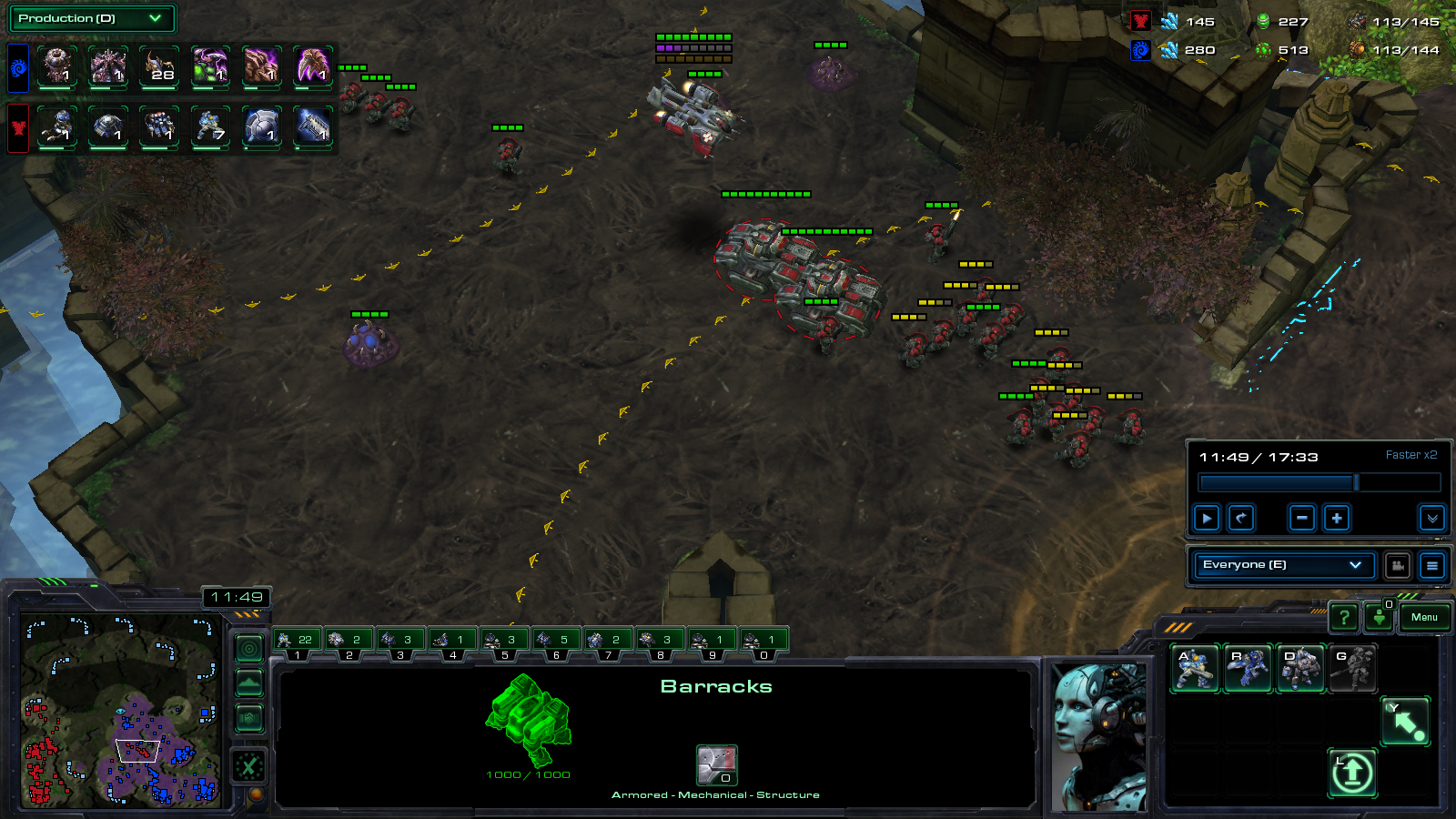 Bomber's macro approach is consistent throughout his play, and this leads to the next discussion point.

Terran cannot trade cost efficiently on creep. At least not with extreme Widow Mine or Tank shots. The main factor is that Baneling (with speed) on creep is faster than Marine with stim. This is an undeniable truth even in the hands of Bomber. Indeed, Bomber does not even bother to do progamer level Marine split on creep. To compensate that, he spends his orbital command's energy on Mule and his apm on macro. Bomber may not trade as cost efficiently as a normal Terran who scans on creep and does gosu Marine split, but he reinforces with a bigger army time after time until his opponent taps out.

Consistent with his game plan, Bomber does not do multi-pronged drop play like many top notch TvZ players do (e.g., INnoVation). He simply attacks with a big force in face to face battles and reinforces time after time. 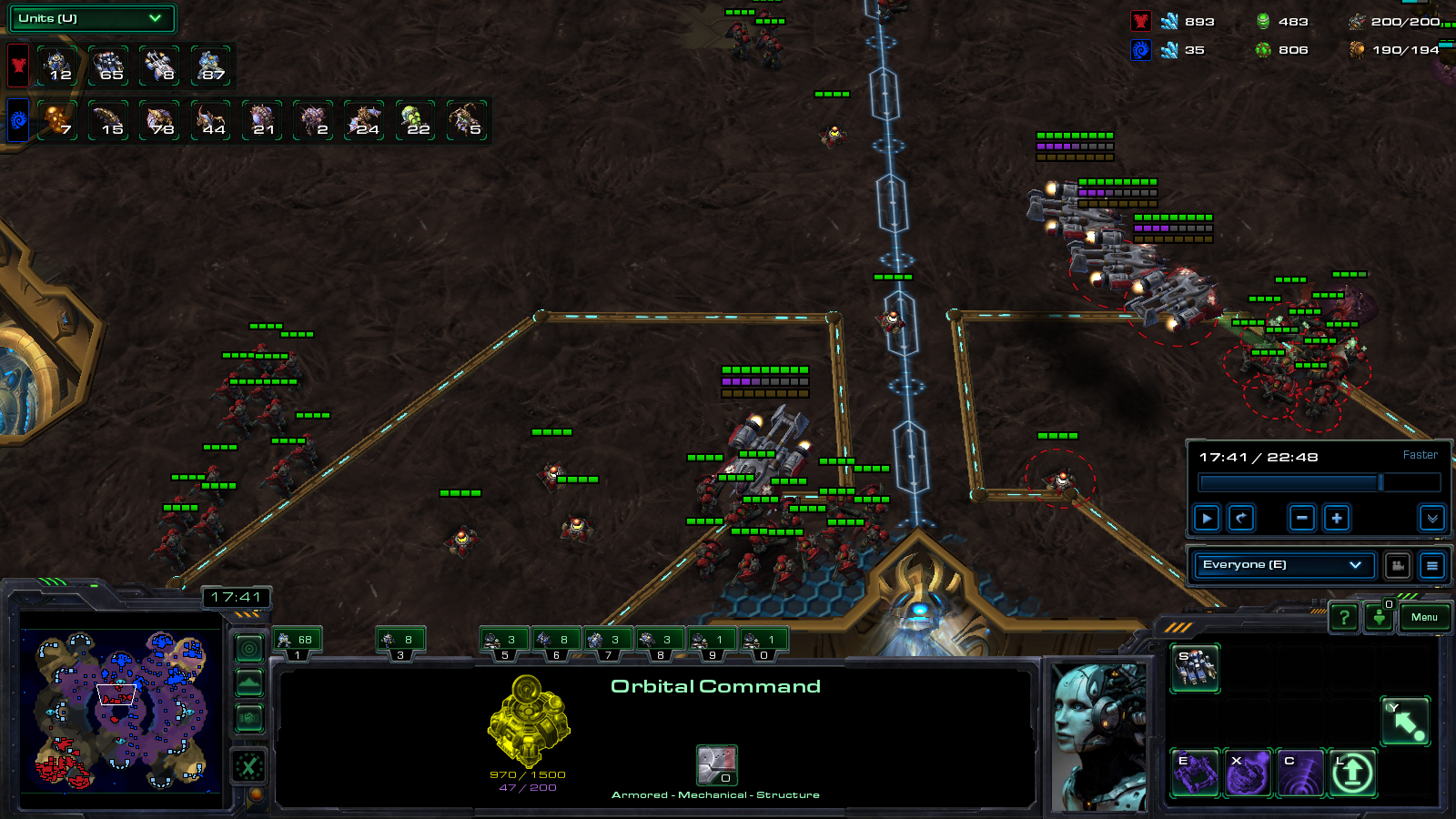 ?Bomber's macro-oriented TvZ style is refreshing in the modern micro-based TvZ. Although his "Bomber style macro build" seems questionable, his general counter intuitive approach warrants attention. He mentioned in his post WCS season final interview that he does not do harassment because of his slow hands. This is certainly worth learning for lower league players who do not have good Marine micro.