Na`Vi strike back in day two of The International with no signs of stopping. Na`Vi crush iG in the best of three matchup to send them off to the Loser's Bracket, where they will face the winner of Orange and EHOME. 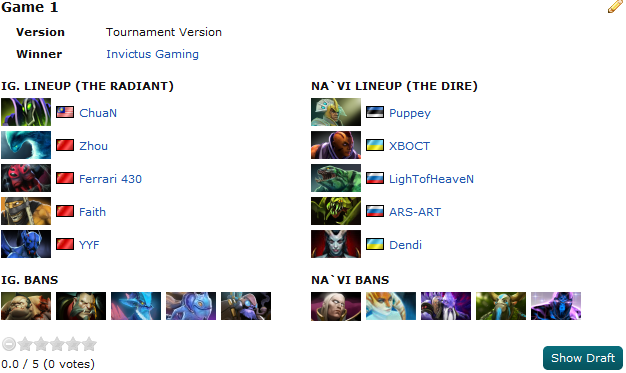 The early game was heavily in favor of iG, where Morphling was able to overpower Anti Mage in the middle dual lane with 17/17 cs compared to XBOCT's 1/3 cs at 5 minutes. As soon the first night phase hit, Night Stalker aggressively roamed the map and prevent Na`Vi any opportunity to farm safely.

With a 4,000 gold lead in 10 minutes, the game was looking to be heavily one-sided with no items on Anti Mage while Morphling was soon getting his Ethereal Blade. It took Na`Vi not more than 16 minutes to realize that the game was over - at 6-0 and a 12,000 gold lead, iG was awaraded the first win of the match. 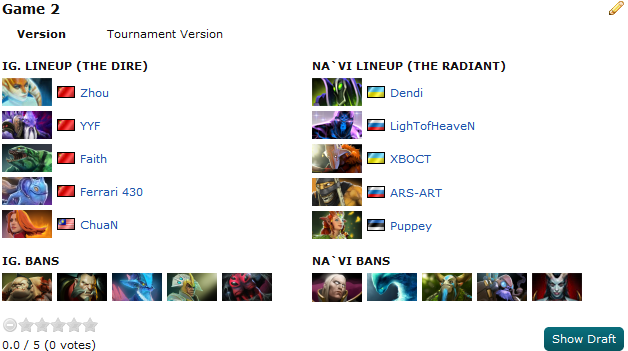 The Juggernaut pick in game two caught iG off as Na`Vi was able to pull ahead in the early game and get towers while iG farmed up Zhou's Naga Siren. Na`Vi soon dominated the gold and experience graph with aggressive push - 5 towers fell for Na`Vi at 16 minutes and iG was desperate.

The Chinese side attempted a backstab on Na`Vi at 18 minutes with Naga Siren's Song, but Dendi's Rubick was able to steal Ravage on top on Enigma's Black King Bar Black Hole, and it led to a 5-0 team wipe with a 12,000 gold lead.

The second push into iG's base went poorly for iG as well, with Dendi stealing the second Ravage of the game and leading to another team wipe by Na`Vi. iG realized they could not fight it anymore and brought the game to a third. 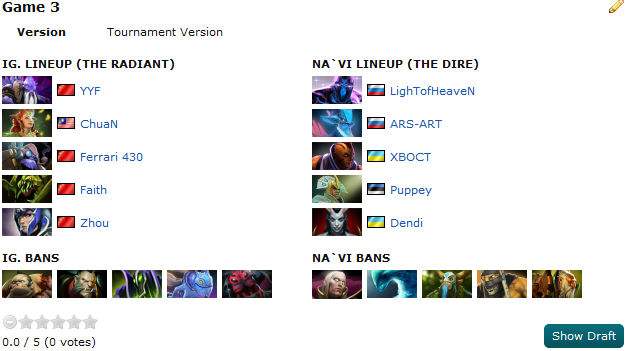 In the third game, Na`Vi was all about the early aggression - towers were taken with four Na`Vi heroes at top lane and two towers down by 5 minutes. While the kill score was 0-0 at 15 minutes, Na`Vi eventually broke the silence at 17 minutes and claiming the kill advantage shortly after.

Na`Vi eventually dominated the cs board with Anti Mage, Enigma and Queen of Pain at the top. The game was all but over after a 4-1 fight in favor of Na`Vi at 20 minutes. The Blink Dagger and Black King Bar on Enigma was impossible for iG to play against and a 12,000 gold advantage and 25,000 experience advantage for Na`Vi at 30 minutes eventually translated into a win for the Ukrainian powerhouse.