Your first Winner Bracket finalist is out - Zenith fall to Chinese powerhouse LGD as part of their 18 game winning streak and will take a seat in the Loser's Bracket where they await the winner of Orange and EHOME. 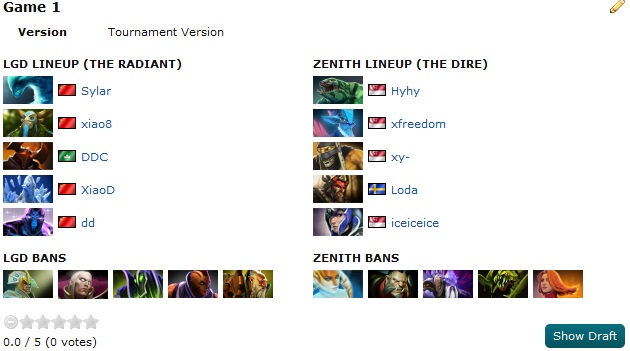 Zenith tried for a cheeky level one Roshan attempt but a Treant from Xiao8 spotted it out and the Dire were forced to back off to their lanes. Despite effective use of smokes giving the Singaporean powerhouse a kill lead in the early game, LGD was still able to pull ahead in gold. Iceiceice's Luna going Hand of Midas as his first item seemed to be the only hope for Zenith.

LGD, however, was able to abuse a mass Black King Bar lineup to great effect, slowly chipping away at Zenith's mid and top melee barracks. The entire mid game was punctuated by a series of smoke ganks and no action at all until LGD decided to siege bottom barracks at 42 minutes. Zenith were unable to prevent the LGD onslaught with their Black King Bars at hand and forfeited the first game at 43 minutes with a kill score of 17-6. 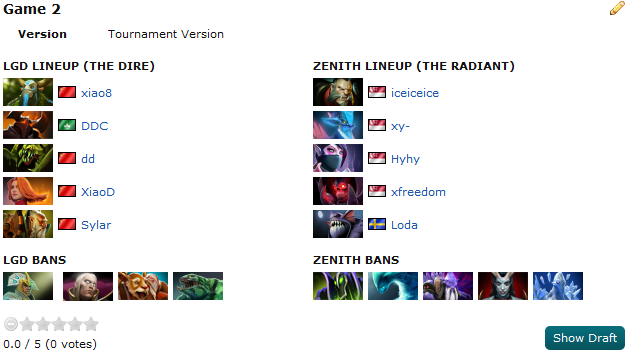 Zenith took a whole new approach in game two, with aggressive tower dives made possible by Slardar at top with Shadow Demon and Leshrac. The Singaporean team was able to pull ahead in terms of farm and towers as they went across the map as five and picked off LGD's frail heroes.

Despite Zenith adopting LGD's strategy of mass Black King Bars in the second game, LGD's coordination was able to turn fights in their favor and claim the Aegis shortly after. This happened before each Roshan up till the third at 47 minutes where Zenith opted to stop them near the Rosh pit. A 5-0 wipe by LGD and an immediate push into Zenith's mid barracks forced Zenith to call the GG.