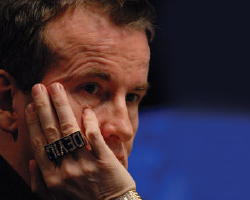 Dave "Devilfish" Ulliot is the most successful and infamous English poker player on record. Ulliot won his only WSOP bracelet in 1997 in a Pot Limit Hold'em event. He earned a presitigious win at the 2003 WPT Jack Binion World Poker Open, defeating Phil Ivey heads up for the $589k first place prize. Ulliot came in 3rd in the 2007 WPT Doyle Brunson Classic Championship Event earning $674k. His most recent significant title was the 2009 Euro Finals of Poker Diamond Championship. He has 32 WSOP cashes for nearly $1.7 million. Ulliot has over $5.8 million in live tournaments. Ulliot was born April 4, 1954 in Kingston upon Hull, where he has resided nearby ever since.

Dave "Devilfish" Ulliot is one of the true characters of the game. He came from a rough and tumble background that has made his later poker success in life all the more legendary. He is a firm believer of the maxim that one must play hard both on and off the table to fully enjoy life.

Ulliot video interviews discussing his career, an EPT event, and a WSOP event: