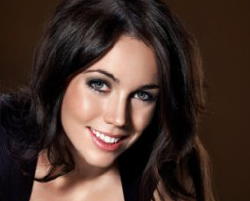 Liv Boeree is one of the more attractive and intelligent female poker pros in poker today. She first started making results in 2007, winning the Ladbrokes European Ladies Championship in 2008. Her defining win was at the largest tournament in Europe (1,240 entrants) at the 2010 European Poker Tour - San Remo event where she won €1,250,000 to become the third woman ever to win a EPT title. Boeree has eight 'in the money' WSOP finishes. She has over $2,050,000 in live tournament winnings. She is a Team PokerStars pro. Online, she won the February 6th 2011 PokerStars Warm Up tournament for over $147k outlasting 4,710 players and defeating James "mig.com" Mackay heads-up. Boeree was born in 1984 in Kent, England and currently resides in London.

Liv Boeree is one of the very marketable young poker pros in the PokerStars Team Pro stable.

According to Daniel Negreanu “Liv is the whole package. She has a great résumé after winning EPT San Remo, is likeable, well spoken, attractive and hard-working. There is no question she was the top free agent and I’m ecstatic that she is now part of the team.”
Boeree interview after her EPT win, interview with Boris Becker, and playing some guitar: