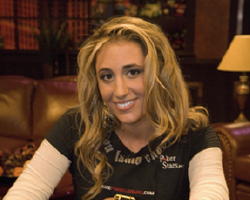 Vanessa Rousso is one of the most successful woman in poker today. Combining her good looks with her game theory heavy style have established Rousso as a top player in today's game. Rousso finished in second play in the World Championships of Online Poker in 2007 for $700k. She finished second to Huck Seed in 2010's National Heads-Up Championship. In May 2009, Rousso won the €25,000 EPT High Roller Championship, walking away with $749,467. Her most recent big scorew as taking 3rd at the WPT Doyle Brunson Five Diamond World Poker Classic for $358,964. Rousso has roughly $3 milllion in tournament earnings. Rousso was born February 5, 1983 in White Plains, New York and currently splits time between Miami and Las Vegas, Nevada.

Vanessa "Lady Maverick" Rousso, at 27, already ranks in the top 5 women of all time in all-time money winnings. She is a PokerStars pro who has been featured on both magazines and poker TV shows regularly. She is a highly marketable player, as evidenced by her spokesperson role with GoDaddy.com.

Rousso videos share a couple videos and coverage of the EPT High Roller event in Monaco: