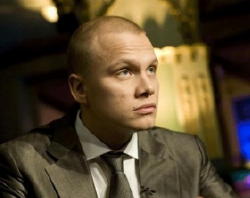 Ilari "Ziigmund" Sahamies is one of the most popular and feared high stakes poker players in the world. He has played at the highest PLO levels online for years. Sahamies is known for his aggression and putting on a show both on and off the table. He has the reputation of being a big gambler, prone to wild swings accompanied by blow ups in chat afterwards. Sahamies has many fans of his style and he is a popular addition to many high stakes cash games TV shows like High Stakes Poker and Poker After Dark. Although he rarely plays tournaments, Sahamies has won over $418k over the years. Sahamies was born in 1983 in Helsinki, Finland where he still resides.

Ilari Sahamies recently switched his play over from Full Tilt Poker to PokerStars, where he now plays as Ilari_FIN, playing lower levels after his multi-million dollar losses in 2010. He seems to be taking a more prudent approach after years of following his mantra...
“Playing it safe will never get you to the top. More important is that you have the balls to bet at the right time. If you want to succeed you need to have a gamblers attitude”
Sahamies videos of playing a hand with Antonius, a hand with Tom Dwan, an interview and his rap music video: