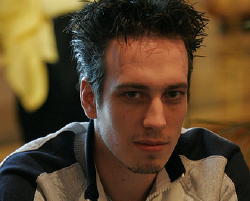 Lex Veldhuis is one of the top poker players from Holland. His biggest cash was in the 2009 $40k buy-in NLHE WSOP event where his 7th place finish was good for over $277k. Veldhuis won his first Dutch tournament title in October 2010 taking down the Dutch Poker Open for $86k. He has live tournament winnings of nearly $600k. Veldhuis is a Team PokerStars Pro who is active in the EPT and American tournament scene. He has played on High Stakes Poker and The Big Game.Veldhuis was born in December 29, 1983 in Vlissingen, Holland and current splits time between Las Vegas and Rotterdam.

Lex "RaSZi" Veldhuis credits Starcraft for teaching him to multi-table, speed of making decisions and improve his overall strategic thinking. He feels he is a much better poker player than he ever was at Starcraft, unlike his friends Goosens and Grospellier. He has been branching out into more PLO and mixed games so he can have a bigger impact in the 2011 WSOP mixed events.

Veldhuis EPT interview, two videos highlighting his active play at 2009 WSOP and a good read at High Stakes Poker that Phil Ivey re-bluffs all in: