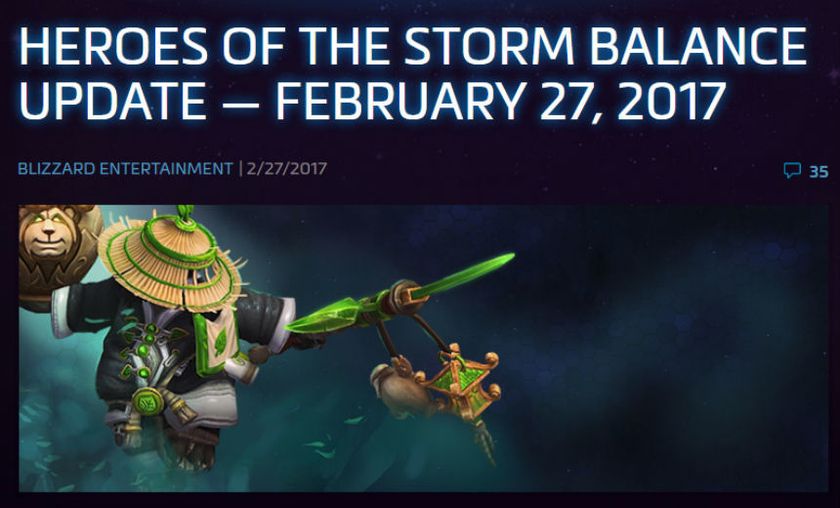 Many of the changes were expected, but the Varian and Tychus ones are huge - and might push them out of the meta altogether.

Press the Advantage (E): Range increase reduced from 1.9 to 1.5 & Duration reduced from 4 seconds to 3 seconds

That's the Stuff (Trait): This talent has new functionality - Minigun will now heal Tychus for 100% of the bonus damage done to heroes after the ability ends.

Wow, this is a big nerf for Tychus. Blizzard obviously intends for this to make him a less viable pick versus non-warriors, but the ironic thing is that it will also punish him versus the tanks he is supposed to counter. Reduced range means he has to have even more dangerous positioning in order to attack the tanks, which makes it even easier for them to punish Tychus's positioning (and Warriors are very good at this in general).

Blizzard might want to figure out a more creative way to reduce Tychus's effectiveness versus single warrior compositions, or else this will become an inadvertent buff to drafting multiple warriors.

Warbringer (E): Increases the slow from 75% to 85%, instead of adding a stun. The cooldown reduction remains unchanged.

RIP Varian. The changes to Varian's Charge ability just don't seem to be well thought out at all. Despite the fact that Varian is known for having a fairly weak pre-level 10 kit, Blizzard inexplicably decided to further nerf Varian's early game while making his late game even stronger. The slow instead of stun on Warbringer is absolutely massive, because lots of heroes have mobility options that allow them to easily get away from the slow.

This becomes readily apparent when considering his ability to counter mobile heroes like Tracer or Illidan. Considering that Warbringer is one of Varian's only selling points in the early game, you might be reasonably led to believe that Blizzard had buffed the stats of Varian's early game but, by and large, you would be dead wrong. Two seconds reduction on the Charge Cooldown just doesn't cut it.

We know why Blizzard did it - they are concerned about the Charge -> Taunt combination, and so is everyone else. So why not revert the Warbringer changes, and remove Taunt? They could give him the World of Warcraft warrior ability Intervene, making him charge to a friendly hero and intercept all incoming damage on that hero for the next 2 seconds with a 30 second cooldown. Add the passive health bonus from Taunt, and presto: a new heroic that keeps the lore flavor behind Taunt while removing the stunlock component.

Surely this would be better than the nonsense changes we have now, right?

Slime (Q): Slow duration reduced from 8 seconds to 6 seconds and slow amount reduced to 20% from 25%.

March of the Murlocs (R): Cooldown increased from 80 seconds to 110 seconds

Slippery When Wet (E): Movement speed bonus increased from 35% to 40%

Rejuvenating Bubble (E): Healing reduced from 50% to 40% of maximum health

Murky was very clearly going to get some well deserved nerfs. Will these be enough? Too much? It's too early to tell, but Blizzard is definitely working on bringing into line some of his overperforming talents. It was exhausting to play against and even Blizzard admits that a hero like Murky should never be this good. Good work.

It's kind of curious that Blizzard chose to just nerf his healing across the board when it is some of Lucio's late game talents, like Rejuvenescia, that makes his late game healing oppressive in some situations. We'll see if these small changes bring Lucio into line, or whether he'll be in line for more nerfs soon.

For the best support in the game, these nerfs are fair and well deserved. Most people can agree that the only real thing that makes Malfurion so overpowered was the strength of his CC. There isn't really much more to say. Great work!

The pro scene lobbied hard for the removal of the old shield functionality, and they got their wish. Given the power of a Tassadar empowered Valla or Tracer in competitive, this is not a bad thing - particularly when it's not likely to have a major impact on lower level play due to the likelihood of not completing the quest in a timely manner at lower levels of play.

Now has a Visual indicator for Misha's leash range

Can now issue commands for Misha outside of her leash range. Misha will run to the edge of her range and leash if she attempts to go beyond.

Did Blizzard get it right with their changes to Tychus and Varian?