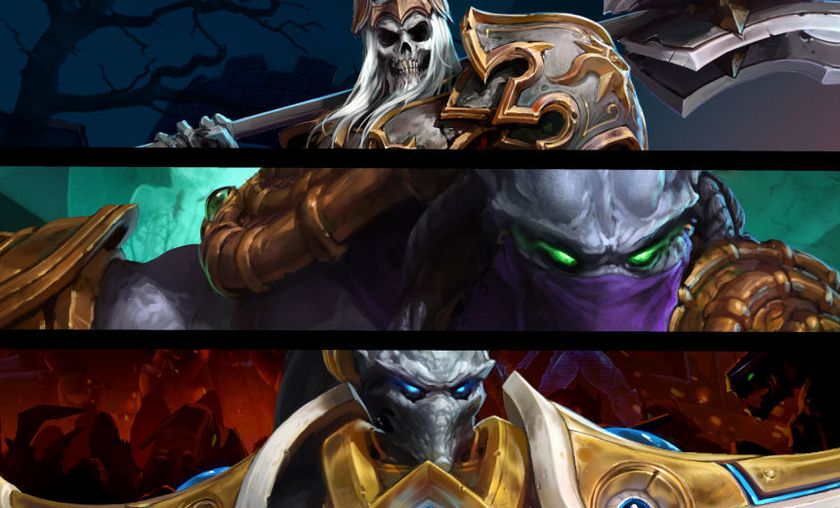 We look at the last two weeks of the HGC Pro division and reflect on some of the meta lessons learned. This week, Leoric and Zeratul made a splash and Tassadar had his last day in the sun.

Here are some of the lessons the second weekend of the HGC has taught us:???????

Leoric is the real deal

Leoric is never a tournament staple but he's never been totally ignored either. The first two weeks of the HGC shows that, in the current environment, his strengths outweigh his weaknesses. If you don't have room to draft Tychus, Leoric can help fill in the gap. His percentage based damage of Drain Hope fairs well against the front-line heavy meta and Entomb initiation punishes Heroes like Valla and Zarya that don't have a way to escape it.

Leoric is also one of the few heroes that can reliably win any solo lane due to his monstrous self-sustain and solid wave clear. He can hold is own against Rexxar on Braxis holdout and even do a good job of trading with Ragnaros. Even if he does die in the solo lane, he can get back to the lane faster than any other hero in the game-- he never leaves it!

The value of Leoric in ghost form is very understated-- the scouting, slow downs, and mid-combat resurrection makes the Leoric team scrappier than you would imagine. We might have thought that Leorics high pick rate last week was a fluke, but Team Freedom, B-Step, and Playing Ducks each proved their loyalty to Leoric this weekend with mixed success. 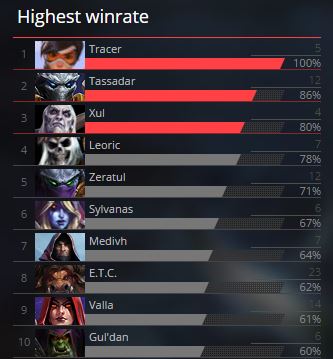 You can nerf Void Prison, Gathering Power, Follow Through-- it doesn't matter. Zeratul seems to always find himself in the tournament meta and this week of HGC games reminded us to never sleep on a Dark Templar. Earning 13 bans and winning 12 out of his 17 games played in the past two weeks, Zeratul's impact on any one match is impossible to deny.

Stealth is a strong mechanic but heroes like Nova and Samuro can't seem to take advantage of it like Zeratul. In both NA and EU, Zeratul is being paired with Ragnaros, Diablo or Jaina for devastating Void Prison set-ups that make late game team fighting a nightmare for opponents.

In a meta where strong frontlines exist for both sides, Zeratul's ability to flank and burst out of position targets safely allows the Zeratul team exude tons of control over the battleground. If Zeratul continues to be a strong pick, it may very well spill into next being played on the newest update.

Speaking of an update...

We bid farewell to Tassadar's reign of terror.

While the rest of us have already been playing on the latest Valeera patch that includes Tassdar's rework, HGC teams had one last weekend of pre-change Tassadar domination. Combining both NA and EU games, Tassadar has the highest number of bans and one of the highest win rates (12 games won out of 14 games played). The only hero with a higher win rate is Tracer, with 5 games picked and 5 games won.

But we all know that Tracer's strength is only so reliable because of Tassadar anyway. Next week, If we do see Tassadar it will almost assuredly be in a double support line-up or on a map like Tomb of the Spider Queen that might make use of his increased Psi-Storm damage. The age of first pick, first ban Tassadar is coming to a close and if the initial reaction of Tassadar's failed re-work is true, he won't see much tournament play.

Honorable mention:  Arthas was championed by Team Dignitas this weekend and appears to be their response to Ragnaros. The team has a surprising 4 game win streak with Arthas, three of them being against Ragnaros. Is Arthas back?

Will you miss the old Tassadar?