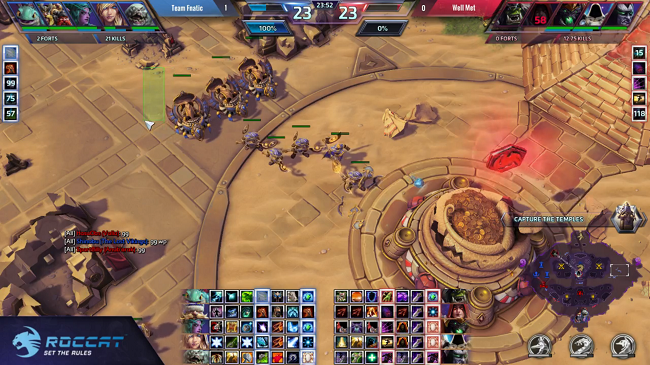 In one of the weirdest best of threes in Heroes history, Fnatic managed to beat Well Met 2-0. Internet issues and game winning catapults were not out of place in this qualifier finale. It started with game 1 being played on Tomb of the Spider Queen, an unusual choice in the HoTS pro scene as most teams are uncomfortable playing on a newer map.

Fnatic showed no such qualms, and with nerves of steel they managed to take down Well Met's very unusual team comp. The real fun began in game #2, as Well Met once again drafted in an unusual way. With a huge power spike at level 16 due to five Blood for Bloods, all Well Met had to was control the map long enough for their comp to ramp up. Although Well Met was moderately behind when they reached level 16, they managed to bring themselves on equal footing, coming out slightly ahead in multiple teamfights.

As the end drew near, Well Met lost more and more of their structures, eventually having their core reduced to 13%. Three temples came up at once, and in a last ditch desperation move, Well Met captured the boss. All Fnatic had to do was secure one temple, but if they messed up the boss would end the game for sure. It was a very tense moment where one small mistake could mean a qualifier or a game three. Before the action could get under way, Well Met's core was taken down by two catapults. A nail biting ending to an incredible series.

With Fnatic now in the mix, the new list of qualifiers is:

Replays are available here and vods for the full event are available on our youtube channel. More incredible Heroes of the Storm action coming your way next week.  Tune in at Twitch.tv/gosugamers to watch qualifier #7.