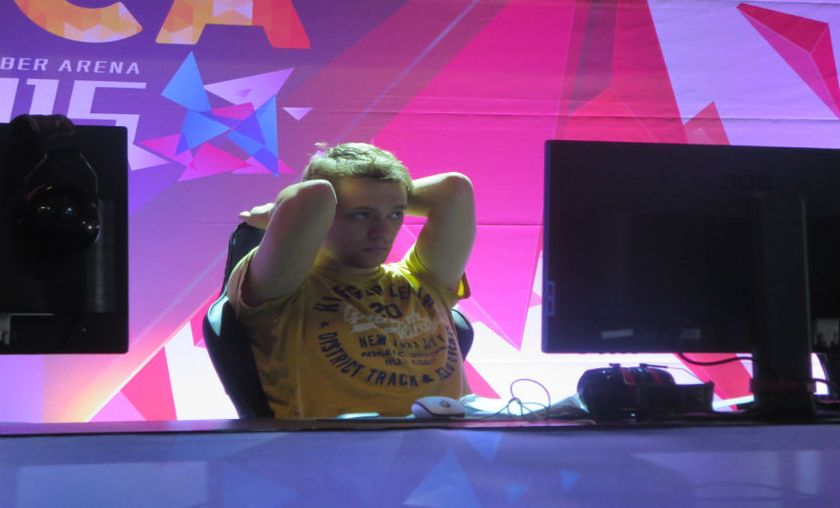 Just one ticket to China left, who will take it? And who will walk away from Gamescom €7,000 richer?

Let us elaborate the format again first. The WCA Pro qualifiers select players from different regions all over the world to go to a huge tournament in China. In the European offline qualifiers, four players face each other in a Round Robin, after which a top 2 and bottom 2 are established. Then it switches to a mini Double Elimination format. The top 2 are already sure of a ticket to China, but the players that end in the bottom 2 will face eachother for the last ticket. The loser of the Lower Bracket final gets nothing and is eliminated from the tournament. The winner of the Lower Bracket final will advance to the Consolation Final, where he will face the loser of the Upper Bracket final. The loser of the Consolation final earns €1,500 but is eliminated as well. In the Grand Final, the winner of the Upper Bracket final faces the winner of the Consolation Final, in a battle that decides who ends second (and wins €3,000) and who first, taking €7,000 home.

On the very first day of Gamescom, a press-only day, the WCA Pro Qualifiers already started.  Situated in what appeared to be the only hall with airconditioning, Czech powerhouse Stanislav “StanCifka” Cifka opened the qualifiers against Dutch routined player Thijs “ThijsNL” Molendijk. ThijsNL started off with fury, and took a quick 2-0 lead over StanCifka. The latter one proved to be resistant to stress, and started what would end in a reverse sweep and a victory for StanCifka. It has to be said though that ThijsNL could just as easily have won. One of the most deciding events was probably when StanCifka got a [card]Mal’Ganis[/card] from his [card]Bane of Doom[/card], which allowed him to take the win.

Lifecoach saw what StanCifka did, and gave it a try himself. He went down 0-2 in his first match, against Kolento, but then switched gears. He ramped over Kolento’s line-up with his and with that claimed his first victory of the tournament.

The second day of the WCA Pro Qualifiers started with a Nihilum clash, as ThijsNL had to face Lifecoach. The latter one had a great start, with two consecutive victories over his team mate. ThijsNL fought back with his Hybrid Hunter, which managed to defeat Lifecoach’s Midrange Hunter. In the fourth match ThijsNL brought his Patron Warrior, and Lifecoach brought his Midrange Hunter. The game was tense, and both Lifecoach and ThijsNL had some tough decisions to make. One of the most notable moments in the game was probably when a [card]Mad Scientist[/card] popped out of Lifecoach’s [card]Piloted Shredder[/card], which allowed him to put a [card]Freezing Trap[/card] earlier in to play. This proved to be troublesome for ThijsNL. During the rest of the game there was barely a move he could make, and Lifecoach managed to finish the game in what was an inescapable death for ThijsNL.

In the second match of the second day, StanCifka was up against Kolento. The match was quite one-sided and StanCifka managed to claim the first game, using his Zoo Warlock to defeat Kolento’s Oil Rogue. Kolento switched to Patron Warrior, but again had to cash in a loss, this time by the hands of StanCifka’s Midrange Hunter deck. All was not lost, as Kolento knew his opponent had only his Paladin deck left to play with, and cleverly switched to his Rogue. This rewarded him with a victory, but it wasn’t enough to change the odds. For their fourth match, Kolento and StanCifka chose their Patron Warrior and Paladin deck respectively, of which the latter proved to be the strongest.

Even though it was already decided who would face who in both the upper and lower bracket finals, there was still some psychological advantage to gain, as both match ups were identical to the ones that are being played tomorrow. The third day started off with a match between the players that had both gone 0-2 so far: ThijsNL and Kolento. Both players knew that Saturday’s lower bracket final was the deciding one, but they still gave it their all. In what was a great demonstration of the power of Patron Warrior, Kolento claimed the first win over ThijsNL in a mirror match. Not letting this influence him in any way however, ThijsNL recovered marvelously and took two consecutive wins with his Hunter and Handlock. The opera wasn’t over (since the fat lady hadn’t sung yet), and Kolento brought the series to a 2-2 tie using his Oil Rogue versus ThijsNL’s Warrior.

There can be only one who is undefeated in Round Robin, and this was to be decided in a match between Lifecoach and StanCifka. Some stories are long, some are short. The story of Lifecoach versus StanCifka was a short one. Not living up to his nickname ‘Ropecoach’, Lifecoach took a quick 3-0 victory over StanCifka.

Tomorrow, on the 8th of August, both the Under Bracket final and the Upper Bracket final are being played. This will bring you to the live stream, which tomorrow will start at 12:00 pm CEST.